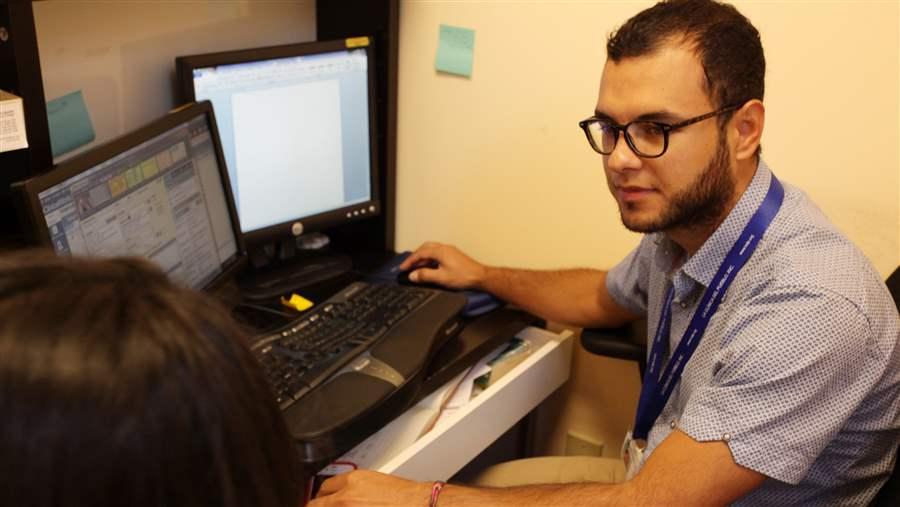 As patient access manager at La Clinica del Pueblo in Washington, D.C., William Joachin helps Latino immigrants access health care. One in four Latinos living in the U.S. does not have health insurance.

In the “sala de espera,” or waiting room, at La Clinica del Pueblo, a community health center in Washington, D.C., signs in Spanish encourage patients to “Empower yourself!” and sign up for insurance coverage through the Affordable Care Act.

Adults slump in chairs, scribbling on application forms, texting friends, waiting. In a tiny office a few feet away, William Joachin, the center’s patient access manager, faces down the frustrations of trying to navigate the federal health care program for the thousands of mostly Central American immigrants who flood the clinic each year. He’s not alone.

A year after open enrollment for the ACA began, one in four Latinos living in the U.S. does not have health insurance, according to new census data, more than any other ethnic population in the country—and most states have few backups in place to help those in the coverage gap. Latino immigrants are the hardest hit: Foreign-born Hispanics are more than twice as likely to be uninsured than are U.S.-born Hispanics, according to census data compiled by the Pew Research Center. (Pew also funds Stateline.) 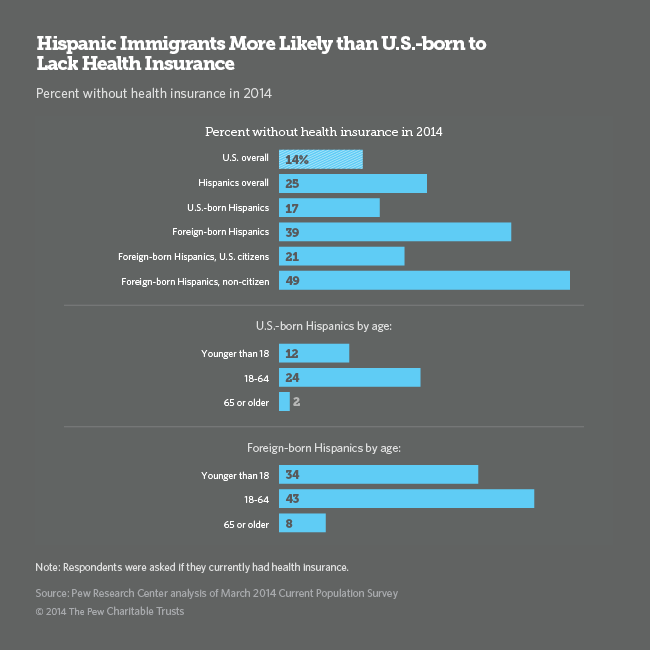 A variety of factors account for this, including a lack of culturally specific outreach programs, language barriers, financial concerns, frustration with the ACA’s complexities and fears that applying could jeopardize a family member’s immigration status.

Illustrating some of the challenges was the woman in Joachin’s clinic who grew up in a Honduran refugee camp and couldn’t read and write. As a legal resident, she’s eligible to purchase health insurance through the exchanges, he said, but she doesn’t know how to spell her name. With help, she first applied back in March and is still waiting.

There are also the former activists who fought against the government in El Salvador during the civil war in that country, and are exceedingly wary about any form of government program, even health insurance.

Then there’s the “mixed status” family with the son a citizen, the mother with temporary protected status, the father with a green card, the grandmother with a visa and the uncle seeking asylum.

“That’s when it gets complicated,” Joachin says.

“Immigrants want to do the right thing, want to buy health insurance,” said Sonal Ambegaokar, senior attorney at the National Health Law Program. “But unfortunately, we put up barriers for them to get access. When we talk about a streamlined health enrollment system, we should really mean that it’s for everybody.”

Fifty-six percent of noncitizen immigrants in the U.S. are Latino, many of whom are in the country illegally and are not eligible to purchase health insurance through the health exchanges, even if they can afford to pay.

Overall, children are more likely to have health insurance, thanks to a number of safety net programs, including Medicaid, the joint federal-state health care program for the poor, and the federal Child Health Insurance Program (CHIP). Despite this, Latino children are more than twice as likely as white children to be uninsured, according to the National Council of La Raza (NCLR), a Hispanic civil rights and advocacy organization based in Washington. One in six Hispanic children does not have health coverage.

Further complicating matters, health advocates say, is most states have done little to remedy the issue. Twenty-four states have chosen not to expand Medicaid to more residents under the federal health care law, including Texas and Florida, which have the second- and third-largest Latino populations in the country.

“Just with (Florida and Texas) alone, as long as they don’t pass Medicaid expansion, we’re going to be left with millions of Latinos uninsured,” said Alejandra Gepp, associate director of the NCLR’s Institute for Hispanic Health. “This costs millions. The cost to (states), having this large segment of uninsured people is huge, because people end up using the emergency room as services. By the time someone gets diagnosed with diabetes in an emergency room, it might be too late.”

The number of Latinos with health care coverage has increased 5.3 percent since the ACA took effect, according to the Robert Wood Johnson Foundation. But many remain uninsured.

One reason is that immigrants are more likely to be lower-income and are more likely to be making an hourly wage at construction or service jobs that don’t offer employer-based insurance, according to Jennifer Sullivan, the director of the Best Practices Institute for Enroll America, a nonpartisan not-for-profit created to expand health care coverage around the country.

“Let’s say you’re making $10 an hour. After taxes, you’re left with probably a check of no more than $400 a week at most,” Gepp said. “If you have to pay $200 in health insurance each month, many decide not to purchase it.”

Language is also a big issue. The Spanish language translation for the federal health insurance exchange was filled with gaffes. In describing the cost of monthly premiums, for example, the website used the word “prima” for premium, which also means “female cousin” in Spanish.

States fared no better with their Spanish language translations. Oregon used the error-prone Google Translate for its exchange. California, despite its large Latino population, offers poor translations, according to Lisa Clemans-Cope, a researcher at the Urban Institute’s Health Policy Institute. There is a Spanish language paper application, but it takes much longer to fill out, creating yet another barrier for immigrants, said Ambegaokar.

Middle-class Latinos are more likely to apply online for insurance, but lower-income Hispanics and more recent immigrants with limited English skills generally prefer to do so in person through a facilitator or over the phone, advocates said.

Trust is also a major factor for families who fear that enrolling in the exchange could jeopardize their immigration status, despite reassurances from the U.S. Department of Homeland Security to the contrary, Ambegaokar said. “But if there’s an immigration raid in that community, it’s not very reassuring.”

There are no statewide safety nets in place for undocumented immigrants and foreign-born residents who are here legally but have not been in the country long enough to qualify for public health programs, according to Gepp. People with “permanent residency” status, who have a green card, must have been in the country for at least five years to qualify for Medicaid. There is no restriction to get insurance under the ACA as long as applicants are in the country legally and have a Social Security number.

In California, where Latinos make up 50 percent of the population, Democratic state Senator Ricardo Lara introduced the Health for All Act, earlier this year, which would expand health care coverage for all Californians, regardless of immigration status. Under the bill, some 700,000 undocumented residents would have access to primary health care in 2015. (Young people who are undocumented and have deportation deferrals are eligible for Medicaid in the state.)

Currently, California doesn’t cover undocumented residents statewide, but there are various county-level programs that do.  California also has state funded Medicaid coverage for people who are designated as having "Permanent residence under color of law” (PRUCOL), including youth with Deferred Action for Childhood Arrivals, and other state-funded coverage for pregnant women regardless of status, according to Gilberto Mendoza, policy associate with the National Conference on State Legislatures.

The city of San Francisco already has Healthy San Francisco, which provides health insurance provides health services to uninsured residents who make up to $54,000 a year, regardless of whether they are documented. And last week, Los Angeles County launched its $61 million “My Health LA” plan, a no-cost health plan for residents who cannot get health insurance, including the city’s undocumented residents.

The District of Columbia has the Healthcare Alliance program, which provides health care for low-income people, regardless of immigration status. But because the program does not offer mental health and substance abuse treatment, it does not meet minimum standards for health insurance as mandated by the ACA, according to La Clinica’s Joachin. The program also is quite complicated, with myriad rules and regulations that make it tricky to access, Joachin said.

Other states rely on a patchwork system of safety-net providers, including public and not-for-profit hospitals, migrant health centers and community health centers like La Clinica which provide primary care to underserved communities, according to a Hastings Center report on undocumented immigrants. Illinois, for example, which has the nation’s fifth-largest Latino population, provides coverage for all low-income children under 19, even if they are undocumented.

In some states, such as Maryland, the quality of care an uninsured immigrant can receive will vary greatly across counties, said Democratic Delegate Ana Sol Gutierrez, a Democrat.

“It’s hard for me to understand why we prohibit people from buying health insurance,” Gutierrez said. “That’s kind of crazy. I’m not saying (undocumented people) should have the free coverage. I’m sure many of them would be able to pay.”