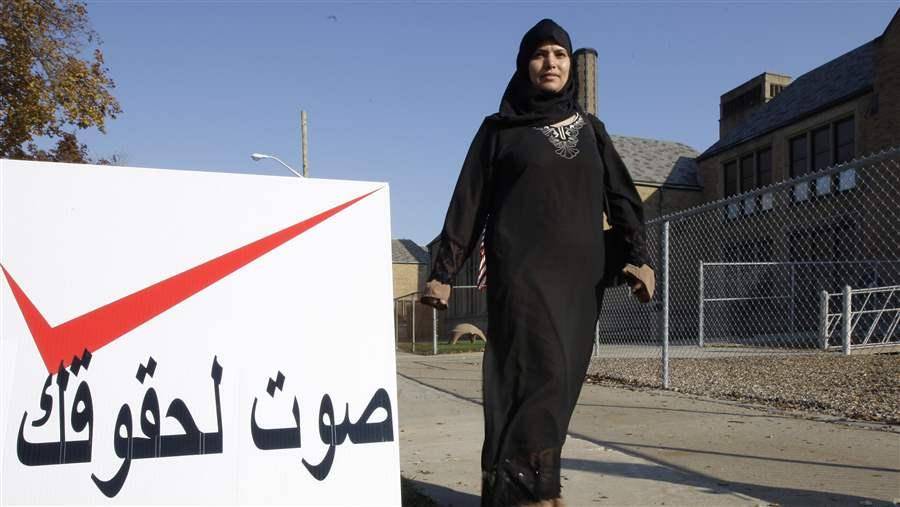 A woman leaves a polling location after voting in Dearborn, Michigan. The sign in Arabic translates to "Vote for your Representatives." Twenty-one percent of Americans now speak a language other than English at home, creating challenges for cities and states. (AP)

This story was updated to clarify that Haiti made an aborted attempt to launch widespread Creole-language education in the 1980s.

PATERSON, N.J. — Mahdi Abedrabbo, 18, speaks Arabic at home with his Palestinian-born parents and English at work in Corrado's Market here, where customers hailing from all over the world buy everything from fresh Italian mozzarella to Turkish tahini.

In nearby South Paterson, a mix of people from the Middle East and North Africa, including Muslims and Coptic Christians, mingle on Main Street, where many of the signs are in Arabic.

“We learn from each other. That’s the way it’s supposed to be,” said Abedrabbo, who was born in the U.S. but whose parents immigrated 34 years ago.

The number of people living in the U.S. who speak a language other than English at home has grown to 21 percent, or 62 million, compared with 18 percent, or 47 million, in 2000, according to census data and the American Community Survey.

The mix of languages being spoken also is changing, according to a Stateline analysis of the data: Since 2000, for example, Italian and Polish have dropped off the list of the top 10 non-English languages in common use in the U.S., while the use of Arabic and French Creole (the vast majority of U.S. speakers are from Haiti) each has surged more than 70 percent. 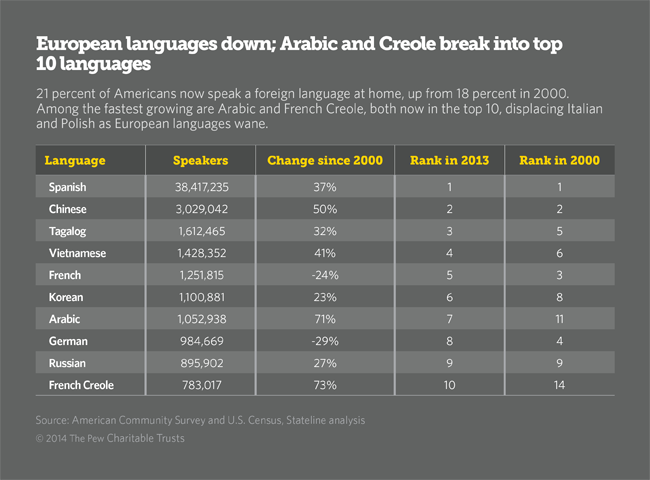 (The census term “French Creole” includes a handful of local languages spoken in parts of the Caribbean outside of Haiti. It does not include Cajun or Patois, varieties of French spoken in Louisiana.)

The changes are creating challenges for cities and states. Michigan now offers voting, financial and health information in Arabic. Connecticut is trying to adjust to the growing number of Arabic speakers who call its domestic violence hotline. And Florida’s Miami-Dade County now distributes its pocket transportation guide in Creole as well as in English and Spanish.

In some states, the growth in a population speaking any one foreign language triggers new requirements. Texas mandates that bilingual education programs begin once a school district has 20 students who speak a foreign language, and  hospitals in California  must provide 24-hour translation services for any language spoken by at least 5 percent of the people who live in its coverage area.

Spanish is still the non-English language spoken by the most Americans: About 38.4 million people report speaking Spanish at home. Chinese is second at 3 million.

Arabic speakers are concentrated in parts of New Jersey and Michigan. More than a million people now speak it at home across the U.S., a 71 percent increase compared to 2000. It is now the country’s seventh most spoken language, up from 11th in 2000, according to the Stateline analysis.

Creole speakers are centered in South Florida and in Massachusetts, and have a large presence in the New York City area. The number of people who speak that language has increased 73 percent since 2000, when it was the 14th most common language spoken at home. It now ranks 10th.

It can be difficult for native speakers of both languages to learn to speak and write in English—and that presents special challenges for educators and government officials. Arabic is written from right to left, and skips vowels in the written form, and the Creole spoken in Haiti—a mix of French and African languages—only recently was standardized as a written language.

A study last year in Washington state chronicled the lives of two of the three Arabic-speaking students in a Pullman middle school, and noted they had trouble in school and often needed their parents’ help at home to bridge the gap between English and Arabic. Teachers were embarrassed that they didn’t know much about students’ backgrounds or language.

Schools with many Arabic speakers have found they cannot help all of them in the same way, said Lane Green, the author of a book on the politics of language.

“Arabic speakers have so many dialects that I think this would be an obvious problem in accommodating them in schools,” Green said. “The same would apply to Chinese. If you're a native Cantonese speaker, Mandarin bilingual help would be very close to totally useless, akin to Italian support for a Spanish speaker.”

The written form of Creole, which was standardized in 1980, was widely used in U.S. schools before it was used in Haiti; Haiti is now reviving plans, stalled in the 1980s, for widespread Creole-language education in a partnership that includes the Massachusetts Institute of Technology.

As a result, Haitian immigrants may arrive in the U.S. not knowing how to read or write in their own language, said MIT professor Michel DeGraff.

"Learners who are literate and secure in their native language are better learners," DeGraff said.  "Because most Haitian students learn to read and write, not in their native Creole, but in French, a language that they are often not fluent in, they typically end up as poor readers and poor writers, in both languages.”

Even as more Americans speak foreign languages at home, there is little risk that any one of them will crowd out English. History has shown that eventually, the American “melting pot” consumes them all, leading some linguists to call the U.S. a “cemetery of languages.” Most of the children and grandchildren of immigrants who spoke Yiddish, German or Italian have long since abandoned those languages in daily discourse.

Lisandro Pérez, chairman of Latin American and Latina/o Studies at John Jay College in New York, said the census numbers are misleading, based on his study of immigrant families in Florida and San Diego.

“Children of immigrants may report that the native language is the one spoken at home, but when we asked them which one they prefer, it’s English,” Pérez said. “Our data showed that English was the preferential language.”

In fact, immigrants who want to preserve the use of their languages often have to take extraordinary measures to do so. The South Korean government, for example, has helped fund Korean language and culture programs for public schools in Bergen County, New Jersey, one of the largest centers of Korean language here.

Abedrabbo, the Arabic-speaking New Jersey teen, said he does find himself speaking English most of the time with his parents now.

“It was harder for them,” he said. “It's like anybody else, any immigrant group—you come here, land of opportunity, and you struggle at first and then you learn.”