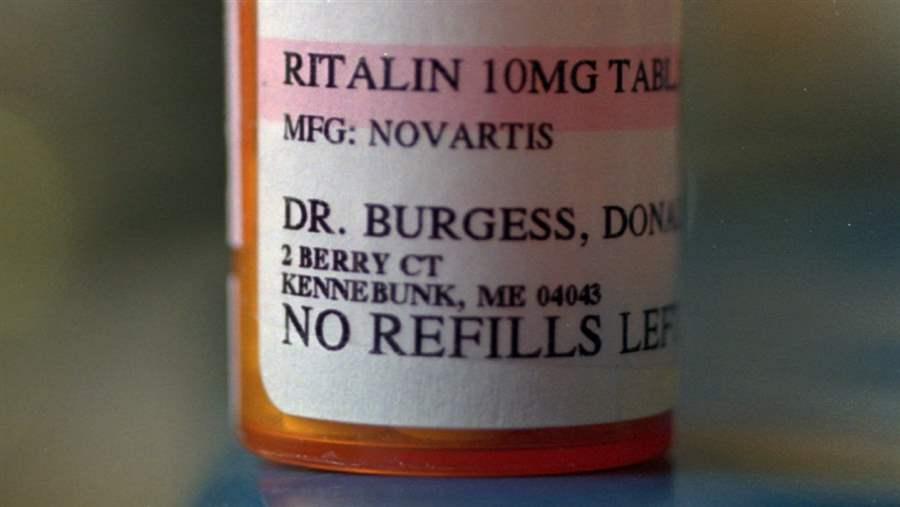 Amid national concerns that too many children are being medicated for Attention Deficit Hyperactivity Disorder (ADHD), some state Medicaid programs are stepping up oversight of diagnoses and treatments.

ATLANTA – Attention Deficit Hyperactivity Disorder, or ADHD, affects one in every seven school-aged children in the U.S., and between 2003 and 2011 the number of children diagnosed with the condition rose by more than 40 percent.

Doctors have considerable leeway in deciding the best course of treatment for a child with the condition, no matter who is paying the bill. But children covered by Medicaid, the joint federal-state health care program for the poor, are at least 50 percent more likely to be diagnosed with the disorder. Georgia alone spends $28 million to $33 million annually on these treatments out of its $2.5 billion Medicaid budget, according to the Barton Child Law and Policy Center here at Emory University.

That is partly because of the toll poverty takes on kids and a lack of resources in poorer schools. But some states believe there are other factors at work. Several have begun to investigate whether doctors and mental health providers who bill Medicaid for ADHD are rigorously using evidence-based guidelines when diagnosing and treating it.

In Georgia, state Medicaid officials are working with the Centers for Disease Control and Prevention to improve the accuracy of diagnoses and the efficacy of treatments for the ailment. Missouri and Vermont have also sought the CDC’s help in analyzing Medicaid claims data to determine how best to improve care for what has become the most commonly diagnosed childhood behavioral disorder.

Separately, Arizona and Illinois have launched prescription drug pre-authorization policies aimed at stemming the use of ADHD medication for toddlers and preschoolers, while Arkansas has focused its attention on older kids and those with multiple behavioral conditions. 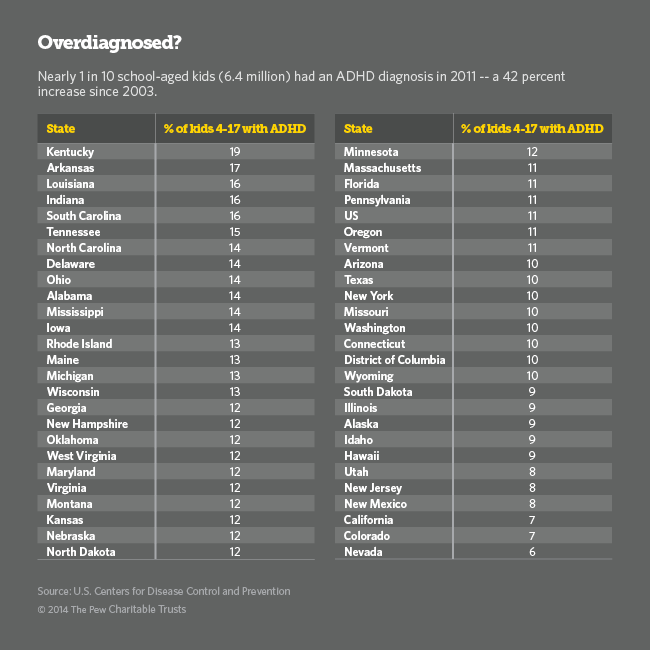 A common complaint is that ADHD is overdiagnosed in the U.S., in part due to successful marketing by big pharmaceutical companies. But a major review of ADHD prevalence estimates across the world concluded that the variability in rates across continents and countries was largely because of differences in the methods of study.

What does concern advocates for children, however, is that there appears to be significant geographical differences in the way U.S. health care providers diagnose and treat ADHD. The worry is that some doctors, without thoroughly assessing a child’s overall behavior, are prescribing stimulants for kids who don’t have ADHD, but do have other behavioral conditions or learning disorders.

Most often diagnosed in early childhood, ADHD is a neurological disorder that can cause severe problems at school and at home and often continues into adulthood. Symptoms include difficulty paying attention, trouble controlling impulses and over-active and often disruptive behavior. If not controlled, ADHD can lead to academic failure, diminished economic opportunities, higher rates of incarceration and even early death.

Rates of diagnosis vary widely across states. Overall, Kentucky has the highest rate of lifetime diagnoses at 19 percent of all children, while Nevada has the lowest at 6 percent.

According to Dr. Susanna Visser, the CDC’s top ADHD researcher, states have the power through their Medicaid programs to change the course of children’s lives by ensuring providers carefully diagnose and treate ADHD at an early age. She said her agency is eager to provide technical assistance to any state that wants to assess the quality of ADHD care in its Medicaid programs by analyzing claims data to see what types of treatments have had the best results, and whether providers are following evidenced-based diagnostic and treatment protocols.

For Visser, the gold standard would be to require doctors to first attempt management of ADHD in young children by using proven psychotherapy treatments involving parents and teachers. In a perfect world, she said, medication should be prescribed only if therapy fails.

The reality, however, is that not all Medicaid programs can afford to invest in extensive therapy treatments, and a severe nationwide shortage of child psychiatrists, particularly in rural areas, can make the use of evidence-based therapy regimens impossible. “It’s hard to take away medications when therapy isn’t readily available,” Visser said.

More Than One Diagnosis

Medical professionals generally agree the most effective way to treat kids under 6-years-old is by educating parents, day care workers and teachers to help them provide more structured environments for children with the condition. Stimulant medications such as Ritalin, Concerta and Adderall are not recommended for toddlers and preschoolers except in severe cases.

For older children with ADHD, a 20-year-old study, published in the medical journal JAMA Psychiatry, set the standard. Using control groups that received stimulant medication only, therapy only and a combination of the two, medication was determined to be the single most effective treatment. Combination therapy yielded somewhat better behavioral outcomes, but the level of improvement was considered too small to justify the cost.

The American Academy of Pediatrics recommends that children ages 6 to 12 with an ADHD diagnosis should receive medication plus parent and teacher behavioral training. For adolescents ages 13 and up, there is no evidence that behavioral strategies work.

Despite these clear guidelines, health care providers often make individual choices about treatments, in part because at least two-thirds of all children with ADHD in the U.S. have one or more other behavioral health disorders such as depression, anxiety or unruly behavior diagnosed as “conduct disorder” or “oppositional defiance disorder.”

ADHD can also be accompanied by more severe conditions, including Tourette syndrome, which is characterized by repeated involuntary movements and vocalizations. When kids are diagnosed with ADHD and another disorder, individual psychotherapy and parent and teacher education may be recommended in addition to medication, depending on the diagnosis.

According to Dr. Ruth Hughes, CEO of the leading national advocacy group Children and Adults with Attention Deficit/Hyperactivity Disorder, “there’s good evidence that combining therapy with medication yields better long-term results.”  It allows kids to use lower doses of medications, which can have undesirable side effects such as addiction to other drugs, and teaches them lifelong coping skills, she said. But for states, the choice of treatments often comes down to money.

Why do ADHD diagnosis rates vary so widely among states? Low-income kids are more likely to have ADHD, experts say, partly because their parents often are unable to provide a consistent and structured home environment for them. Foster kids who may move from home to home in their younger years, for example, have the highest rates of the disorder.

Another theory is that states that struggle to adequately fund schools have a higher rate of ADHD diagnoses because teachers often lack the resources to provide special services to unruly kids and instead encourage parents to find a doctor who will prescribe medication for the condition.

In Arkansas, Medicaid officials decided five years ago that health care costs in general were rising at an unsustainable rate. They decided to take a look at the “episodes of care” that affected the largest number of people and showed the most room for cost reduction. One of the first conditions they tackled was ADHD.

About 60 percent of all kids in Arkansas are covered by Medicaid. Of that number, 90,000 are receiving some type of behavioral health treatment, with ADHD as the leading diagnosis.

A review of state Medicaid claims data from October 2012 to December 2013 revealed that thousands of older kids with “pure” ADHD – not accompanied by other behavioral disorders – were receiving individual therapy that was not recommended by medical guidelines and their symptoms did not improve. Most received medication as well.

Once providers were informed they would no longer be reimbursed for that kind of therapy, Arkansas’ ADHD costs dropped 29 percent. More important, said Dr. Larry Miller, who headed the team that reviewed doctors’ practices, the initiative acted as a sentinel. Providers were put on notice that the agency was reviewing their claims data for inconsistencies.

According to Miller, fewer behavioral health providers in Arkansas are now diagnosing pure ADHD cases. Instead, much of the care has shifted to pediatricians and primary care doctors who are assessing kids with problems in school, writing ADHD prescriptions and following up to manage their medications.

Dr. Adam Benton, president elect of the Arkansas Psychological Association and one of several medical advisers to the state on its ADHD policy, said he’s all for more rigorous diagnoses and treatments, but he’s concerned that primary care doctors may not have the expertise to detect early signs of other behavioral health problems in their ADHD patients.

“The problem with this model and mentality is that you’re only talking about pure ADHD and the rate of pure ADHD is very low,” he said.

Arkansas recently expanded its oversight to include another common behavioral health diagnosis known as oppositional defiance disorder (ODD) that frequently occurs in children with an ADHD diagnoses. Characterized by a pattern of negative, defiant, disobedient and hostile behavior toward authority figures, ODD cannot be managed by drugs.

Instead, national guidelines call for educational training sessions with parents over a period of several weeks – not the quick fix parents and teachers want to see – but the only treatment that has proven successful. Evidence-based research is very clear on ODD treatment, Miller said.  In addition, Arkansas is reviewing treatments for ADHD combined with ODD, and plans to address other child behavioral health conditions in the future.

In Arizona, where Medicaid-eligible children receive services through the state’s behavioral health agency, a new policy requires all physicians to seek preauthorization from a panel of peers before prescribing ADHD medications to children under 6 years old. The process takes 14 days unless quicker approval within 72 hours is required because of an urgent situation.

Illinois has a similar policy and it may be repeated in Missouri and Vermont. Part of the goal is to reduce costs by eliminating unnecessary medications for kids who may not have been properly diagnosed for ADHD or who may no longer be exhibiting symptoms.

As states pursue these policies, “I’ll be interested to see what happens to (ADHD diagnosis) rates over time,” Visser said.  “Cost is a big factor in Medicaid, but states should make sure they’re not removing medication and leaving kids with no treatment at all,” she said.