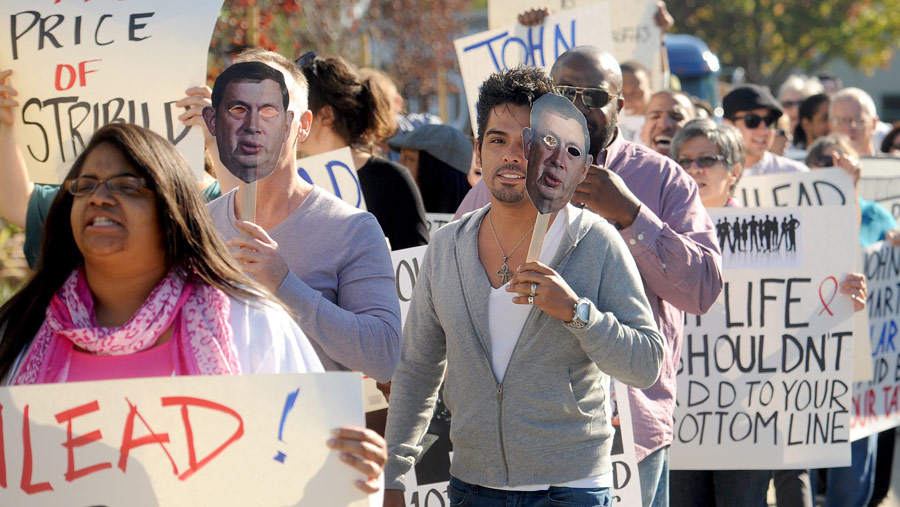 Demonstrators march in front of Gilead Science’s Foster City, California, headquarters protesting the $28,500 price per patient for its AIDS treatment Stribild. The company is hearing similar complaints now over the $84,000 price tag for a course of treatment for its new hepatitis C treatment, Sovaldi. (AP)

The new hepatitis C drug Sovaldi promises a cure rate of well over 90 percent, compared to 45 percent (at best) for older drugs. But when Sovaldi went on the market earlier this year for as much as $84,000 for a single course of treatment, critics blasted the cost as “exorbitant” and “gouging.”

It is estimated that between 3.2 million and 5.2 million Americans have hepatitis C, an infectious illness that can eventually compromise the liver.

The disease falls disproportionately on the poor and the incarcerated, which makes it a particular challenge for Medicaid, the federal-state health plan for the poor, and for state prison systems. One study by Express Scripts, a drug benefits management company, estimated it would cost states $55 billion to provide Sovaldi to all prisoners and Medicaid beneficiaries with hepatitis C.

Because of its high cost, some state Medicaid programs and prison systems are refusing to provide Sovaldi to any but the sickest patients. Most recently, Oregon last month threatened to limit access to the drug unless it can get Sovaldi at a deeply discounted price.

“Sovaldi is a seminal event,” said Matt Salo, executive director of the National Association of Medicaid Directors. “It’s clear that states are not equipped to handle this. They simply do not have the tools to maintain control.”

But Sovaldi is only the beginning. Expensive new treatments for certain cancers, rheumatoid arthritis and other conditions also have rattled Medicaid officials, patients and health care providers.

What can states do to hold down drug costs? Drug pricing is a complicated and opaque process. Here are some of the basics.

Question: Is each state Medicaid program on its own when it comes to drug pricing?

Answer: Not completely. The federal Omnibus Budget Reconciliation Act of 1990 mandates that drug makers give all Medicaid programs a 23 percent rebate off the Average Manufacturers Price (AMP) for all prescription drugs purchased, or the difference between the AMP and the best price given to a private payer. (Prisons aren’t covered by this discount provision and have to negotiate drug prices as any retailer does.)

In return for the rebates, Medicaid programs must carry all drugs approved by the U.S. Food and Drug Administration on their “formularies,” which is the list of the medications each health plan will pay for.  That guarantee means that the drug makers get access to substantial markets in all 50 states and the District of Columbia.

But even with the 23 percent discount, drugs are unusually expensive in the U.S., which unlike other Western nations has no price controls on drugs. In 2013, for example, the cost of the reflux medicine Nexium ranged from $23 to $60 in the Netherlands, England, Spain and Switzerland, but averaged $215 in the U.S., according to the International Federation of Health Plans.

Question: Why doesn’t the U.S. have price controls on drugs?

The cost of nurturing a single drug from the laboratory to the market is generally well over $1 billion. And the odds are stacked heavily against any single drug making it: Only about one in 5,000 drugs that enter preclinical testing ultimately receives approval for sale by the U.S. Food and Drug Administration. Even getting through human clinical trials hardly guarantees ultimate success, since only about one fifth of those drugs make it to the market.  Drugs that reach the market take an average of 12 years to do so.

Question:  Other than the rebate, is there any other way state Medicaid programs can control their drug costs?

Question: How does that work?

A prescription health plan, including a Medicaid program, can show a preference for one drug over another by putting it on its Preferred Drug List. Drugs that don’t make it on that list are subject to obstacles that dissuade patients (and their doctors) from their use. In Medicaid, those obstacles are co-pays and requirements for prior authorization from the health plan. For obvious reasons, drug makers are eager to get their products on preferred drug lists, and they are willing to pay for their inclusion. That creates negotiating room for the state Medicaid programs.

Question: How large are these discounts?

Question: In the case of Sovaldi, can’t the Medicaid programs use the preferred drug lists to get better rebates?

Answer: In this case, no. There is no preferred drug list when a new drug essentially creates a class of its own. Sovaldi is a breakthrough drug, far superior to what came before. Because it has no competitor, the states have little leverage.

Question: So the Medicaid plans are helpless?

Answer: Not entirely. Through the prior authorization process, they can essentially ration the use of Sovaldi, which is what a number of state Medicaid plans and prison systems are doing. They are saying that only patients with advanced symptoms are eligible for Sovaldi. So even though a cure is available, many of those with the hepatitis C virus will be unable to get it. However, patients who are denied coverage for the drug may go to court to insist on access.

Question: So how will states deal with other expensive breakthrough drugs?

Answer: Sovaldi certainly represents close to a worst-case scenario in terms of pricing. It is a breakthrough drug for a widespread, life-threatening condition. Many other expensive breakthrough drugs are for rarer conditions. Still, many believe that price controls of some kind are inevitable if drug manufacturers don’t moderate prices on their own.

Some have suggested a value-based pricing system tying drug prices to two measures of benefit: the clinical value of the drug, measured in quality-adjusted years of life gained through its use; and the cost savings associated with the use of the drug. In the case of Sovaldi, that would include the cost of liver transplants that no longer would have to take place.