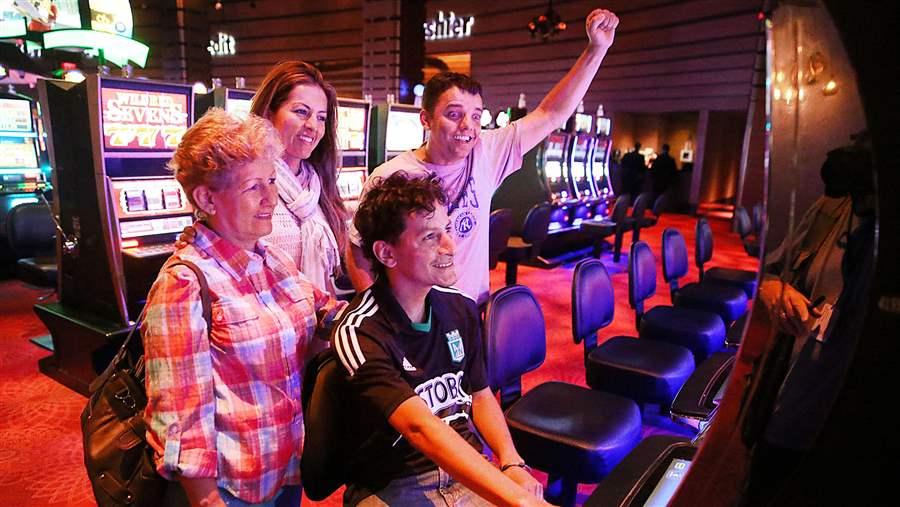 Hercilia Restrevo, Monica and Juan Varela and Carlos Gonzalez take advantage of the slot machines before the Revel casino in Atlantic City closed Sept. 2. Despite multiple casino closings there, casinos in other states are doing well, bringing in millions in state and local revenue. (AP)

Recent casino failures in Atlantic City may influence Massachusetts residents when they vote this fall on whether to repeal a law allowing casinos in their state. But if they look beyond New Jersey, they will find casinos thriving in almost every other area of the country.

In fact, it’s the burgeoning growth of “regional” casinos such as those planned in Massachusetts that caused problems for Atlantic City, which was harmed by gaming palaces in nearby Pennsylvania, according to gambling experts.

Overall, the casino gambling industry—whether freestanding, on riverboats, at racetracks or on tribal reservations—is thriving, posting the third consecutive year of robust growth coming out of the Great Recession, according to the American Gaming Association, an industry group.

In 2012, the most recent year for which figures are available, spending at commercial casinos rose 4.8 percent to $37.3 billion, according to the association, which gets its numbers from state regulatory agencies. As a result, state and local tax revenues from gaming jumped 8.5 percent, to $8.6 billion, the group said.

The idea that casino gambling is dying is a myth, according to Chris Moyer, the gaming group’s spokesman.

“Revenues have not decreased overall,” Moyer said. “Gaming is thriving in communities across the country, especially in locations where casinos consist of one piece of a diversified economy.” He noted that casinos are doing particularly well in Mississippi and in Las Vegas, where gambling activity has returned to pre-recession levels. Maryland is also opening two new casinos this year, he said. 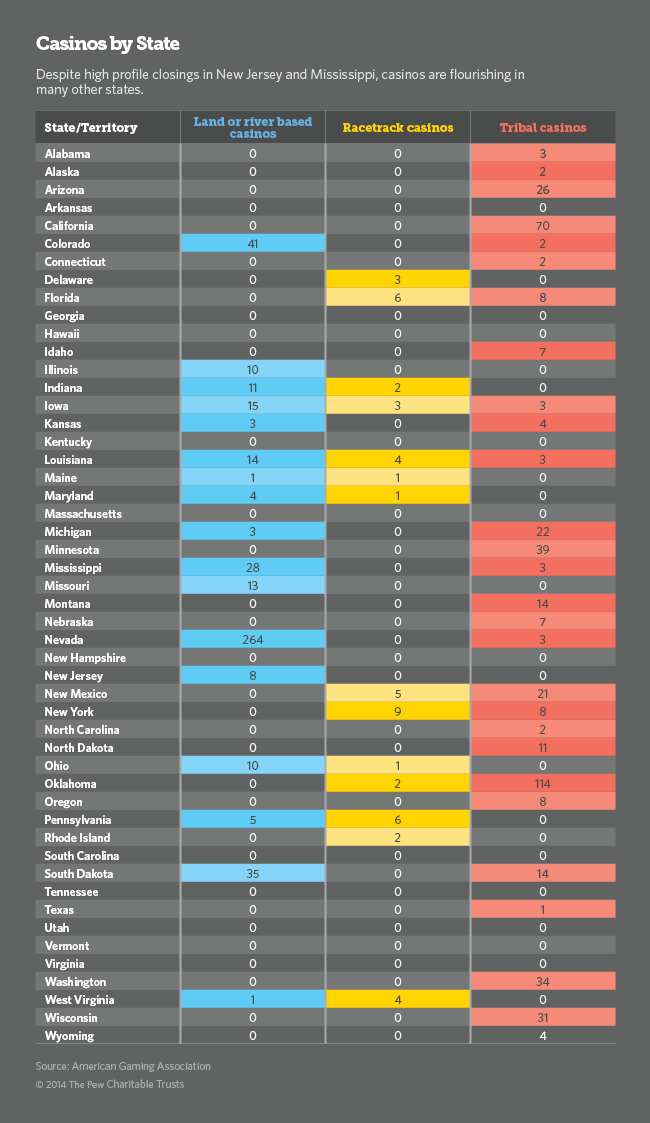 The study also asserts that gaming supports 1.7 million jobs, either directly or indirectly through businesses such as equipment manufacturers and nearby restaurants.

The University of Nevada Las Vegas, Center for Gaming Research reports that overall casino gambling revenues increased 38 percent between 2001 and 2013, even with a dip during the recession. In 2013, the report said, casino revenues nearly returned to pre-recession highs.

“It’s not bottomless, but people still enjoy gambling,” said David G. Schwartz, the center’s director. “Gaming has increased in revenues, and the numbers bear that out.”

Schwartz did note some possible saturation in the “convenience casino” market — nearby gambling facilities where people go for the day or just for a few hours — compared to the “destination casinos” in places such as Las Vegas.

Because Atlantic City has only a few casinos with nongambling shows and events, it has not become a destination for people looking for more than just gambling, Schwartz said. Increased competition from the “convenience” casinos in nearby Pennsylvania and Maryland also took a toll. The city also sustained damage from Hurricane Sandy in 2012, which hurt its economy.

Schwartz predicted that Massachusetts voters will not repeal their state’s gaming law. The last time voters in any state did so was in the early 1960s when Maryland scrapped a slot machine law. Now those machines are back in Maryland, along with table games, in three new casinos which have opened or will open in two years.

In Massachusetts, supporters of the repeal say the job creation touted by casino companies is fleeting. But in a television advertisement, Jeff Ciuffreda of the Springfield Chamber of Commerce said a planned casino there would create 3,000 jobs, directly or indirectly related to the casino.

“Springfield’s unemployment rate is in the double digits,” Ciuffreda says. “We need the 3,000 jobs. We want the 3,000 jobs. People with money in their pockets will stay here in the area and spend it. Please vote ‘no’ on Question 3.”

But Harold Vogel, CEO of the financial firm Vogel Capital Management in New York and an expert on the gambling industry, questions the jobs argument, saying politicians don’t take into account all the costs, at least publicly.

“It’s not going to create high-income jobs. It will create low-income jobs,” Vogel said. “Do they ever talk about the costs? No. You have to set up a bureaucracy and some commissions. Without that, you have the crime guys come in.”

“Then there are the costs of problem gambling,” Vogel said. “Then you have to set up more police because people come in with strange ideas like they are going to do robberies. Then there’s the traffic and the pollution it might create.”

In a poll taken in August by the University of Massachusetts Lowell Center for Public Opinion, the most recent survey available, 59 percent of those asked supported casino development, while 36 percent opposed it and 5 percent were undecided.

Some states are hurtling into the casino business at lightning speed. Ohio now has 10 stand-alone casinos and one racetrack casino, all of which opened since voters approved a constitutional amendment in November 2009.

Since then, there have been some worries about saturation; at one casino in Toledo, revenue dropped 3 percent between July and August. But overall, the industry is flourishing in the state. Gambling revenue at the casinos was up nearly $2.7 million from July to August, a 4 percent increase, according to the Ohio Casino Control Commission.

In Maryland, the legislature and voters approved casinos in 2007 and 2008. The state’s fifth casino, Horseshoe Casino in Baltimore, opened at the end of August, and a sixth is scheduled to open in National Harbor near Washington, D.C., in 2016. That one was approved by a 2012 vote.

Clyde W. Barrow, a casino specialist and chairman of the political science department at the University of Texas-Pan American, says the market is continuing to expand in the Northeast.

“You look at New York, Rhode Island, Pennsylvania – they especially have done quite well,” he said. “Delaware and West Virginia have held their own by adding table games.”

Barrow said state revenue increases every time a new casino opens in a state, up to a point. In Pennsylvania, for example, every time a new casino was added “they got a boost,” he said. “Now there are 12 casinos in the game, it’s more stable. Now, probably they will grow at 2 percent to 4 percent annually. It’s starting to behave like any other industry that has reached maturity.”

“The reality is that it (casino gambling) is no less stable nor any more volatile than any other source of revenue at this point,” Barrow said. “In the past, casinos were recession-proof. That was when they were only in Las Vegas and Atlantic City, but now they essentially track the business cycle.”