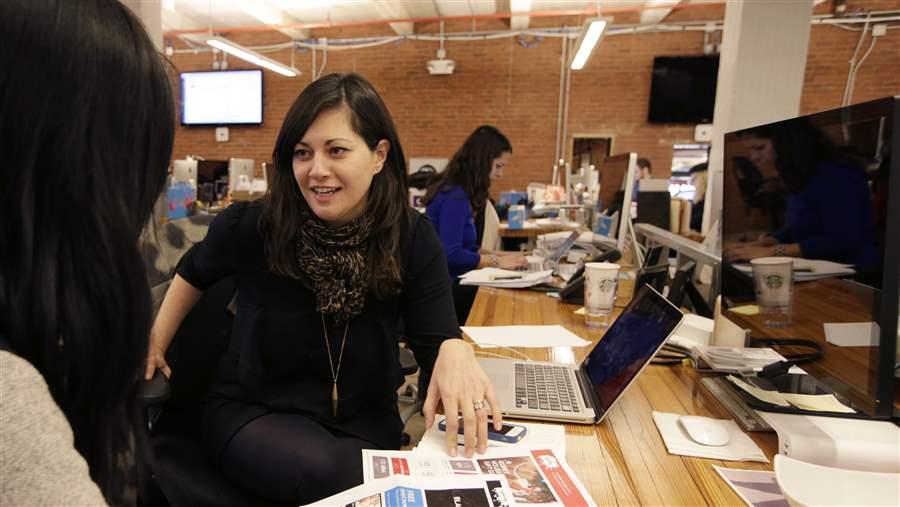 Workers at Quirky, a New York firm where workers are allowed to take off for one week every quarter in order to prevent burnout. New York City is considering a “Right to Request” law mandating that private employers consider employees’ requests for flextime without retaliation. (AP)

For 16 years, Dena Adams investigated child abuse cases for Covenant House, a Manhattan nonprofit. But when the agency put her on the overnight shift in 2011, the single mother found herself scrambling to find child care for her 11-year-old daughter.

Adams didn’t feel comfortable leaving the girl alone at night in her Brooklyn neighborhood, which could be dangerous, so she asked Covenant House for an evening shift instead. The agency refused—and then fired her. (Covenant House declined to comment on Adams’ specific case, but said it has “a strong commitment to working with each of our employees to provide the flexibility that is so vital in today’s workplace” and that it must balance employees’ needs “with the critical needs of a 24-hour crisis shelter.”)

“I thought they would work with me and they worked against me,” Adams said. “I can work anywhere, any job. Just give me the flexibility to care for my daughter. That’s all I ask.”

Some cities and states are trying to give that flexibility to their own employees. California, Iowa, Massachusetts, Oklahoma, Oregon, Rhode Island and South Carolina all direct state agencies to allow “flextime” schedules for their workers, according to the National Conference of State Legislatures.

Some states and cities are going further, by applying the same rules to the private sector. At the beginning of this year, Vermont and San Francisco began mandating that private employers consider employees’ requests for flextime without retaliation. New York City may soon follow suit.

In June, New York City Comptroller Scott Stringer published a report recommending that the City Council pass “Right to Request” legislation creating a formal mechanism for employees to ask for flexibility without fear of reprisal. The legislation is expected to be introduced over the next few weeks.

“It’s time for the public and private sectors to work together to reshape the workplace,” Stringer said in the report. “‘Right to Request’ legislation would create a process to discuss flexible arrangements.  Whether it’s in finance or law, retail or health care, all industries can benefit from flexible work arrangements. New York City should be a trailblazer in creating models for the 21st century workplace.”

There’s interest on the federal level as well. In July, Democratic Reps. George Miller of California and Rosa DeLauro of Connecticut introduced the Schedules That Work Act, which would give hourly workers more control over their schedules.  In June, President Barack Obama directed federal agencies to give employees more leeway in their work schedules. And last year, Democratic Rep. Carolyn Maloney of New York introduced the Flexibility for Working Families Act, which would authorize employees to ask for a permanent or temporary change in their work schedules.

“I hope as these bills are introduced around the country, the onus will be on the employer to make this work, and [that they will] address the critical issue of scheduling and adequate hours,” said Ellen Bravo, executive director of Family Values @ Work, a national network of 21 state and local coalitions advocating for family-friendly workplace policies.

“When people doing the work have some say in their work, they tend to do a better job. Let’s make it about policy, not about favoritism or how clever you are at talking to your boss. We need to have protections people need so they can be successful in their jobs and in their lives.”

Eighty-two percent of American children are growing up in households where both parents work, but a 2012 study by the University of Minnesota’s Carlson School of Management found that employees who asked for flexible working arrangements to care for a child or elderly relative often faced negative consequences. According to the National Women’s Law Center, less than half of employees across the country have any say in their work schedules, while more than one-third of parents believe a request for a flexible work schedule cost them a promotion.

According to the New York City Comptroller’s report, one in five workers in the U.S. is responsible for elder care, while 65 percent of caregivers report having to alter their schedules or take time off from work to care for family. Nearly 75 percent of employees of both genders report not having enough time for their children.

Given all that, advocates for working families say, there is a pressing need for more flexible work schedules. In Vermont, private-sector employees can ask for flexible work schedules for any reason. In San Francisco, they can request flexibility to care for a child, a parent 65 or older or any family member with a chronic health condition. Employers are required to seriously consider the worker’s request and provide concrete explanations if the company can’t accommodate the flextime request.

Such legislation also helps employers by providing a structure for such requests, according to Liz Watson, director of Workplace for Justice at the National Women’s Law Center.

“This simplifies things for (human resources) workers,” Watson said. “They shouldn’t be figuring it out on their own. These are the most compelling and urgent needs in society today that we’re not meeting. Unless you have a bona fide business reason not to, grant the request for the person who needs it.”

But flextime can be a challenge for managers, particularly when employees have to work in teams, said Teresa Amabile, professor and a director of research at Harvard Business School. This is particularly true if the schedule change is unexpected, she said. “That can just wreak havoc on the rest of the team; how they’re going to get information from them or how they’re going to do handoffs.”

Coordinating workflow and communications is the biggest challenge facing managers and companies, Amabile said. But she said these hurdles can be managed using technology, and that her research has shown that flextime can work well for both companies and employees.

“It’s a wonderful tool from the company’s perspective of retaining talented employees,” said Amabile, the co-author of “The Progress Principle: Using Small Wins to Ignite Joy, Engagement and Creativity at Work.” “From the employee’s side, people are more engaged with their work and perform more productively and more creatively when they feel they have more autonomy in their work.”

Flexible Working in the U.K.

The “Right to Request” concept started in the United Kingdom, where parents or registered caregivers of children younger than 16 can request flexible work hours without fear of being penalized. Earlier this year, the U.K. strengthened the “flexible working” law. Now all employees, regardless of family status, are allowed to request different start and stop times or to work from home. Employers must deal with the requests in a “reasonable manner.” Other European countries have followed suit, and New Zealand passed similar legislation in 2007.

In the U.S., the notion of flexible work schedules has been bouncing around for some time. The late Democratic Sen. Ted Kennedy of Massachusetts pushed the Family Medical Leave Act as a way to address some of the issues, and in 2007, he introduced the Working Family Flexibility Act.

The debate about flexible work hours heated up a couple of years ago when Facebook’s Chief Operating Officer Sheryl Sandberg urged women to “Lean In” and take charge of their careers, while Yahoo CEO Marissa Mayer rescinded the company’s previous flextime and telecommuting policies in favor of “face time” in the office. Meanwhile, The Atlantic declared that women “still can’t have it all”—at least not without a massive workplace overhaul.

Some labor researchers worry that the talk about flexible work arrangements will focus exclusively on middle-class, white collar workers while ignoring the needs of working class shift workers who are often at the mercy of managers who can change their schedules on a whim. Fewer than three out of 10 employees say they have the ability to change their daily starting times, and only one in 10 employees participate in formal flextime schemes, according to the Institute for Women’s Policy Research.

In some instances, a flexible work schedule can actually harm employees, said Bob Bruno, professor of labor and employment relations at the University of Illinois. “When you ask workers to define a flexible work schedule, they come up with something that’s different from what their employer comes up with. How do you reconcile that? In a non-union place, the employer dictates what happens.”

After nearly 18 months of unemployment, Dena Adams found work with an agency that finds housing for homeless women.

“It’s excellent, Adams, 46, said. “The director there is all for family, ‘whatever you have to do for family, we can rearrange your schedule.’ She gets it. She says, ‘I know once your kids are fine, you’re better.’