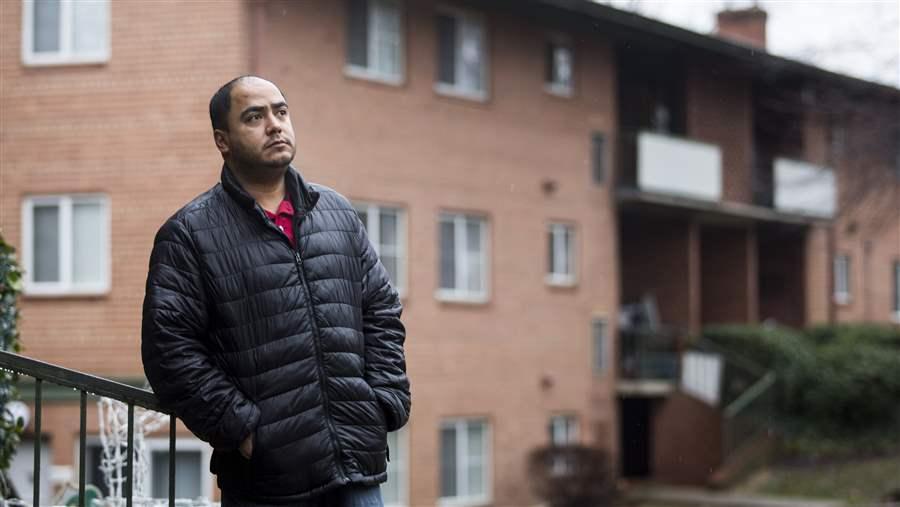 Hector Pineda stands outside his apartment in Arlington, Virginia, where redevelopment will claim many of the area’s housing units as early as this year. While the city and developers have pledged to provide 800 affordable apartments, Pineda is concerned that many of his neighbors will have to move to find lower rents. Renters across the country are struggling as their incomes fail to keep up with rents. (Getty)

Like a growing number of renters across the country, Christene James of Jackson, Mississippi is near the end of her rope. Her part-time job as a gas station cashier no longer covers expenses since her fiancé’s layoff at a water meter technology supplier.

“The pay is so low at most places, the rent becomes unaffordable,” she said. “After gas, food and necessities for our 2-year-old daughter, we are back to zero, which makes us apt to take out small payday loans which push us further back.”

Renters across the country are struggling to pay their rents. In many cases, it’s because rents are climbing faster than renters’ incomes.

A Stateline analysis of Census Bureau data shows that in 27 states, the median or typical renter is now spending more than 30 percent of income on rent, a situation considered “burdensome” by federal standards. That’s a sea change from 2000, when no states were in that position. Federal guidelines say families paying more than 30 percent of income may have difficulty paying for food, clothing and other necessities. 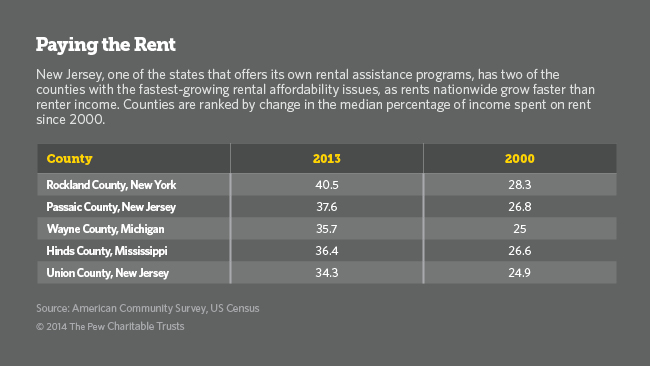 High numbers of renters who pay too much of their income for rent can cause economic problems for an entire community, according to a Center for Housing Policy study this year. “Spending a disproportionate share of income on housing stifles economic growth as these households restrict their spending,” the study concluded.

This situation has left some areas and states to create their own programs to help renters. A review this year by the Technical Assistance Collaborative found 52 state-funded subsidy programs in 30 states, ranging from North Dakota’s total $42,000 spending on rental gap assistance to Massachusetts’ $83 million HomeBASE program.

Many of the programs are focused on homelessness prevention, and many target specific populations like the disabled or the elderly.

Mississippi had one of the most jarring drops in rental affordability statewide since 2000, as median rents rose 61 percent from $439 to $708 a month, while renters’ income increased by only about 19 percent.

In Hinds County, Mississippi, where Jackson is located, the typical amount renters paid for rent has shot up from 27percent of income, considered affordable, to 36 percent.

While many of the hardest-hit areas are in low-income areas like Jackson and Paterson, New Jersey, even wealthy and booming areas have experienced the same problem. All of the 269 counties in the U.S. with more than 30,000 rental households saw rental affordability decline since 2000.

Even in Arlington County, Virginia, for example, where renter income is high and growing fast, rents are increasing even faster. The county’s proximity to Washington, D.C. has drawn millennials and empty-nesters looking for car-free commutes, pushing out working-class families who also rely on public transportation.

The county has lost almost half its affordable apartments, or about 16,000 units, to gentrification or condo conversion, said Nina Janopaul, president of the nonprofit Arlington Partnership for Affordable Housing. Young and middle-aged professionals have moved out of the far suburbs and into nearby spots, displacing people of more modest means, she said.

“It’s now cool if you’re 25 years old to live in an apartment within walking distance of a bus stop or Metro station,” Janopaul said. “Empty-nesters are also selling their homes in the suburbs and buying condos in Arlington. This resurgence in urban living is creating more demand for everyone.” 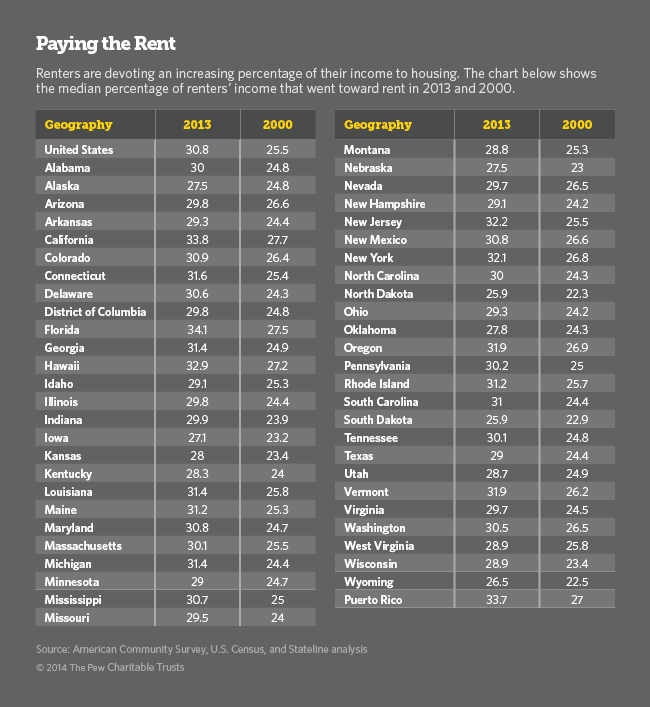 A Harvard study last year found that renters have been losing ground to inflation since 2000, as renters' paychecks lost ground, while rents kept soaring.

“Significant erosion in renter incomes over the past decade has pushed the number of households paying excessive shares of income for housing to record levels,” the study said. “Assistance efforts have failed to keep pace with this escalating need, undermining the nation’s longstanding goal of ensuring decent and affordable housing for all.”

Gentrification of near suburbs like Arlington can drive working families to outer suburbs in search of affordable housing. “Those individuals have had a huge exodus,” said Janopaul. “They move to the outer suburbs where they have these huge transportation costs to add to the cost of living.”

“We find a lot with 10 rooms, and two to five people in each room,” he said. “Working these low-paying jobs, how else can they afford to live here?”

“The character and flavor of the area has always been basically one-family housing,” Levy said, “Couple that with high rents because of high operating costs and high taxes, and it’s a problem for the lower-wage earners.”

The federal Section 8 housing program was meant to help subsidize needy renters, but in most areas, including Rockland, Arlington and Jackson, waiting lists can be years-long and are closed to new cases. The Harvard study found that while renters eligible for Section 8 mushroomed from 16 million to 19 million after the recession, only about 200,000 new cases were added.

In the meantime, Arlington County in Virginia is studying housing needs to see what more can be done with the $7.8 million it spends to serve 1,200 low-income families. “When the gap between what they can pay and the rent keeps widening, it puts a big strain on the housing grants.” said Kurt Larrick, a spokesman for the county.

New Jersey, which has two of the most impacted areas in Passaic County and Union County, home of Paterson and Elizabeth, also has a State Rental Assistance Program. During the last two fiscal years, the state-funded program spent about $40.5 million to help more than 4,000 low-income households with rent.

Rentals continue to expand as people of all ages opt out of the housing market, an updated Harvard study noted this year, and the increased demand keeps pushing up rents. Apartment rentals are profitable and more are being built, but that probably won’t help those at the bottom of the income scale.

Recently built apartments tend to be aimed at the new middle-class renters who have opted to wait out the housing market.

“New construction typically adds units at the upper end, well out of reach for households with limited incomes,” the study said.