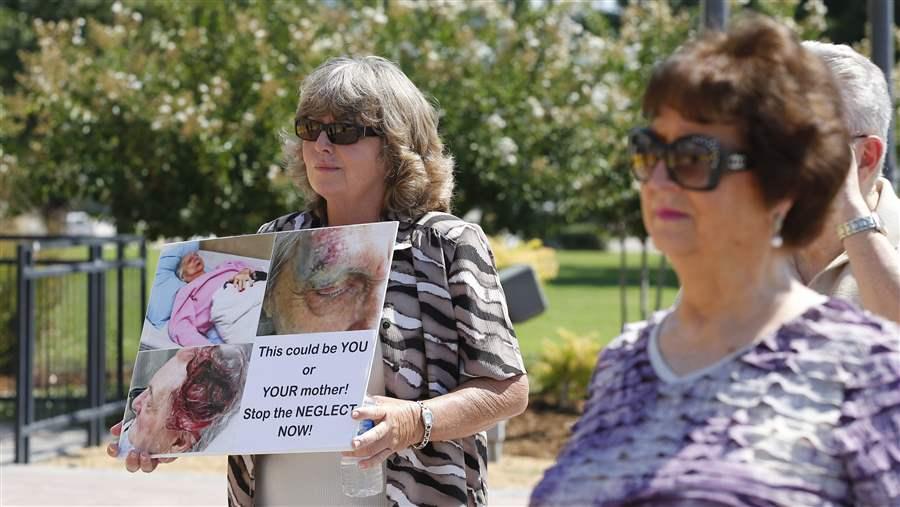 Christina Anderson, left, of Tahlequah, Oklahoma, holds a sign with photos of her mother, Pauline Brill, which Anderson said were taken after her mother's stay in a nursing home, during an Oklahoma City rally to improve the condition of the state's nursing homes. Oklahoma is one of a handful of states that have passed laws allowing residents to install cameras in their rooms to help prevent abuse and neglect. (AP)

Over the years, Illinois Attorney General Lisa Madigan has consistently heard “horror stories” about the abuse or neglect of nursing home residents. Now she is trying to bring such cruelty out of the shadows and into clear view.

Madigan’s office is drafting legislation, likely to be introduced in 2015, which would allow Illinois nursing home residents and their families to place cameras in their rooms to help protect them.

“Residents and family members should have the option, for their own peace of mind, to monitor what is taking place,” said Madigan. “If something goes wrong, you can see what actually happened.”

If the measure is approved, Illinois would join at least four other states—New Mexico, Oklahoma, Texas and Washington—that have laws or regulations allowing residents to maintain cameras in their rooms. In Maryland, cameras can be placed in a resident’s room, but only if the facility permits them, according to state guidelines.

The nursing home industry isn’t opposed to states allowing cameras in residents’ rooms if they are being used as a way to ensure the delivery of quality care, said Greg Crist, senior vice president of public affairs for the American Health Care Association. The organization worries, however, that nursing homes could face higher staff turnover if employees decide to look elsewhere for a job where they aren’t constantly under scrutiny. And it remains cautious about privacy issues.

“As one law professor said, you’re infringing on someone’s privacy, arguably for their own benefit,” Crist said. “We have to make sure it’s justified.”

While no one keeps data on the total number of allegations of abuse or neglect in nursing homes, an August report by the U.S. Department of Health and Human Services Inspector General’s office found that 85 percent of nursing facilities reported at least one such allegation to the agency in 2012. It estimated that about 60,000 allegations involved staffers abusing or neglecting residents.

Since 2000, at least a dozen states have considered some type of law or regulation allowing cameras in nursing home rooms to help detect and deter abuse and neglect, according to Amity Overall-Laib, a manager at The Consumer Voice, a national advocacy organization that promotes quality long-term care. The group operates a program that provides training and support to state and local ombudsman across the country. The ombudsmen are advocates for residents of nursing homes and assisted living centers who try to resolve complaints and press for improvements in the long-term care system.

Legislative proposals permitting electronic surveillance have failed in a number of states. Some nursing homes and unions representing health care workers have voiced concerns about privacy violations, particularly if the equipment is hidden. And some advocates for seniors and family members have argued that cameras might be too invasive.

But the concept of privacy has been evolving, as boomers whose parents live in nursing homes demand more transparency in the digital age.

Overall-Laib said her group supports a resident’s right to decide whether to use audio or visual electronic technology. But it also believes that precautions must be taken. Among them: the resident’s roommate should also consent and not be visible on camera; recordings should be the property of the resident or his representative; and family members who make a decision on behalf of an incapacitated resident should carefully weigh his right to privacy and autonomy before installing the equipment.

“Putting in cameras is definitely an important issue,” said Overall-Laib. “As long as the areas of consent and privacy are addressed, it should be up to the resident to choose one or refuse one. If the resident can’t provide consent, if they have a guardian or a legal representative, then the state needs to have a very clearly defined process about consent.”

The nursing home industry has pushed for a number of changes in state legislative proposals, such as requiring that the resident or family pay for the camera and that a sign be posted outside the door of the room, warning that electronic monitoring is in use.

Crist said the industry doesn’t believe that using cameras is a guarantee that residents will be protected and well cared for. “(The cameras) should not be the be all and end all, in terms of ensuring quality of care,” he said.

Crist said that the industry doesn’t track how much electronic surveillance currently is being used in residents’ rooms. About 1.5 million people reside in nearly 16,000 nursing homes nationwide at any given time.

In the handful of states that have created laws permitting electronic monitoring devices in residents’ rooms, the requirements vary.

In Texas, the first state to pass such a law in 2001, the resident or guardian must pay for the equipment and a notice must be posted outside the room stating that electronic monitoring is being used. A nursing home may require that the device be placed in plain view, and cannot refuse to admit or discharge a resident because of a request to install a device.

Patty Ducayet, Texas’ state long-term care ombudsman, said she thinks such devices are used infrequently in her state, but she supports a resident’s right to install one.

“It’s no silver bullet,” Ducayet said. “But I’m all for preventing abuse and neglect, and this fits naturally with a person’s right to oversee their own care.”

In Oklahoma, which passed its law last year, a resident’s roommate must also give written consent before an electronic monitoring device is installed, and the nursing home must accommodate room changes for the resident if the roommate refuses. It also must post a notice near the main entrance saying that electronic monitoring may be in use. Recorded footage from the device may be admitted into evidence in a civil or criminal court action.

“This law is strongly pro-resident,” said Esther Houser, Oklahoma’s long-term care ombudsman. “The facility is not permitted to move the camera, obstruct it or retaliate against them for having it.”

Houser said that the law intentionally does not require that a sign be posted outside a resident’s room.

“Senior groups argued that this is supposed to be a home-like environment. What’s less homelike than putting a sign on a resident’s door saying there may be a camera in use?” she said. “Residents also don’t have to tell the facility where the camera is, so it can be hidden.”

Houser said that she – like many senior advocates - strongly believes that above all, electronic surveillance in nursing home rooms is a matter of personal choice.

“There are wide differences of opinion about what is protection and what is an invasion of privacy,” she said. “We should honor those differences and give people the right to decide individually if they want video surveillance or not. It’s America. We usually give people choices.”

Acting on their Own

Sometimes, family members who suspect that their loved one may the victim of abuse or neglect decide on their own to install surveillance cameras, or “granny cams” in the nursing home room. In recent years, families in Pennsylvania, New Jersey and other states have captured alleged mistreatment on hidden cameras.

While many advocates for seniors applaud efforts to crack down on the mistreatment of nursing home residents, they want to make sure that privacy and consent are carefully assessed in any discussion of electronic surveillance. They point out that residents may not just be videotaped eating and sleeping, but also being bathed, having their diapers changed and having consensual sexual relations.

Illinois Attorney General Madigan, a Democrat who is running for re-election this year, said that she understands the concerns about the privacy rights of not only residents, but roommates, staffers and visitors.

But Madigan, who has long been involved in initiatives to improve nursing home safety in Illinois, argues that video surveillance is everywhere nowadays, and that nursing homes should not be allowed to bar residents or their families from putting a surveillance camera in the room if they choose to.

In the last several months, Madigan said the issue hit home with her. An elderly friend who had broken his hip and been sent to a rehabilitation facility told her how poorly he had been treated there. Another friend complained about how her mother, who had suffered a stroke, had gotten subpar care in a nursing home.

Madigan said that putting a camera in the room is an easy and inexpensive way to monitor a senior’s care. She noted that the Illinois Department of Public Health gets nearly 19,000 calls a year about suspected abuse or neglect in nursing homes, and responds to more than 5,000 complaints.

Madigan’s proposal would allow video or audio monitoring devices in the nursing home room if the resident or family pays for and installs them. It would require both the resident and roommate’s consent and would prohibit the facility from retaliating against a resident for using one. It would provide that recordings be admissible as evidence in a civil or criminal case, and would create misdemeanor and felony penalties against anyone who intentionally tampers with or destroys a recording.

“I have no interest in making someone’s private life a reality show,” Madigan said. “This really is about protecting people in nursing homes. Unfortunately, there are far too many stories about people who are not safe.”