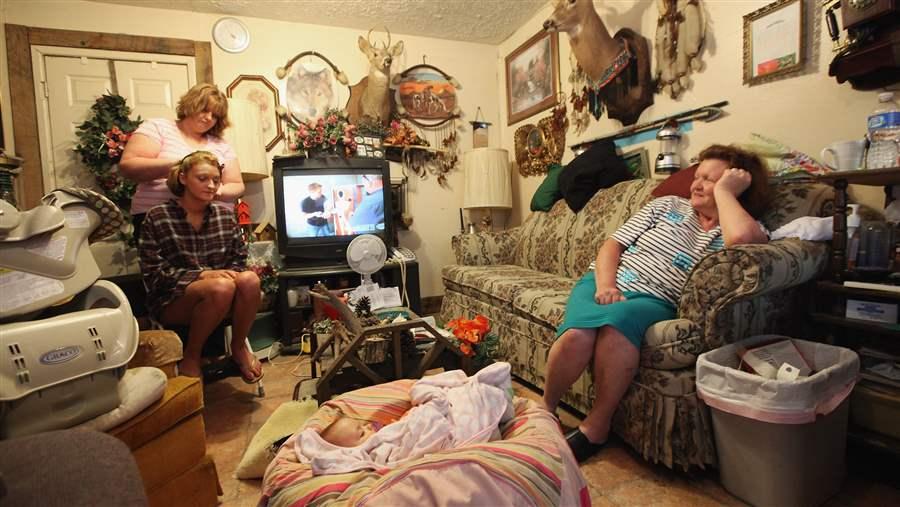 Drucilla Smith has her hair done in her Booneville, Kentucky home as she prepares for the Owsley County High School prom. The last U.S. Census listed Owsley County as having the lowest median household income in the country outside of Puerto Rico, with 41.5 percent of residents living below the poverty line. (Getty Images)

NOTE:This story has been updated to reflect the fact that Maine has the lowest rate of low-income residents in deep poverty, at 26.3 percent.

The overall picture of poverty among states is a familiar one: Some states, such as Mississippi, have long claimed the highest poverty rates according to the federal income standard. Others, such as Hawaii, Maryland and Massachusetts, often are at the opposite end, with poverty rates less than half those in more impoverished states.

But a Stateline analysis of new state-by-state poverty data released by U.S. Census Bureau last week shows that some states with the lowest overall poverty rates in 2013 also had some of the highest percentages of low-income residents living in deep poverty — defined as earning less than half of the federal poverty level, or about $12,000 per year for a family of four.

The persistence of deep poverty in states that have been relatively successful in reducing their overall poverty rates is a vexing problem, one that might expose serious shortcomings in the country’s safety net, according to economists and anti-poverty advocates.

Depth of Poverty, State by State

To see how the composition of those living in or near poverty varies state to state, click here for Stateline’s data visualization.

The Census’ measure of income includes earnings before taxes and a range of other benefits, but notably excludes food stamps and housing support, which often supplement poor Americans’ household spending.

Maryland illustrates the dilemma. In 2013, 20.6 percent of Americans were living at, below, or just above (up to 125 percent of the poverty standard, or about $30,000 for a family of four) the federal poverty line. In Maryland the rate was just 13.3 percent, the third-lowest percentage among the states plus the District of Columbia.

However, nearly 38 percent of Maryland’s low-income residents were living in deep poverty, highest among the states (though lower than the District of Columbia).

There are several possible explanations for the discrepancy.  Some point to pockets of poverty in rural western Maryland that are detached from economic growth and safety-net programs. Others point to concentrated economic despair in Baltimore: A recent Brookings Institution analysis found more than one in 10 of the city’s poor residents live in areas where the overall poverty rate tops 40 percent, a concentration that can perpetuate a lack of economic opportunities and make addressing the issue even more of a challenge.

It’s a reality familiar to Bill McCarthy, executive director of Catholic Charities of Baltimore. He said there are areas of Baltimore where poverty rates top 90 percent and many residents are homeless. In some parts of the city, more than 70 percent of residents are unemployed and many of them have criminal records that make it difficult for them to get hired. In those cases, he said, the typical approaches to dealing with poverty have limited effect.

In response, Catholic Charities has centralized its own assistance programs, providing job training, behavioral health care, housing help and other services in a single place. The approach recognizes that for some people, traditional anti-poverty programs such as food stamps, welfare and unemployment benefits simply aren’t enough. For one thing, some of the poorest people in Baltimore don’t have an address where they can receive those benefits.

“I remember when they declared the Great Recession over and I said we weren't seeing it,” McCarthy said. “There’s still a significant amount of need.”

The challenges aren’t unique to Maryland. The percentage of Hawaii residents living below, at, or just above the poverty rate is 14.5 percent, the fifth lowest when compared to the states and D.C. But Hawaii  has the sixth-highest share of its low-income residents in deep poverty, almost 37 percent. Advocates noted last week that the state’s extraordinarily high cost of living exacerbates the problem for many who live there.

Massachusetts is another example: The state’s 15.3 percent rate of residents below, at or near the poverty rate puts it at 43rd overall. But 36 percent of Massachusetts low-income residents are living in deep poverty, which is 10th highest among the states and D.C.

Nationally, the share of low-income residents in deep poverty is 34 percent; Maine has the lowest rate, at 26.3 percent.

Half of Americans who are mired in deep poverty are younger than 25 years old, a report from the Urban Institute found, and more than a third of those are younger than 17. To help poor children, the government and advocates can provide free or reduced-price lunches in schools and health care programs targeted toward children. Programs such as the Special Supplemental Nutrition Program for Women, Infants and Children (known as WIC) help many children as well.

Reaching childless adults in deep poverty can be more difficult because many safety-net programs such as tax credits for the working poor or Temporary Assistance for Needy Families (commonly referred to as “welfare”) are tied to work, or are limited to parents. Just 4 percent of deeply poor people older than 16 worked full time for a full year prior to the survey the Urban Institute analyzed. Three-fourths hadn’t worked at all.

“Most people in poverty are working,” said Elizabeth Lower-Basch of the Center for Law and Social Policy, a low-income advocacy and research group. “Deep poverty tends to have less connection to work. You’re seeing people there who either aren't working at all or are in very intermittent work.”

Many of the deeply poor are struggling with issues that make finding work a difficult task, or even a secondary one. It’s an especially potent problem in D.C., where nearly 45 percent of low-income residents are in deep poverty.

“A lot of the parents have these kinds of barriers that need to be addressed first. It might be an issue with domestic violence, it might be a mental health issue,” said Jenny Reed of the D.C. Fiscal Policy Institute, a research group originally established by the left-leaning Center on Budget and Policy Priorities. “The challenge is that there isn’t necessarily support for parents or even people who aren't parents while they’re trying to solve those barriers.”

“It’s really hard to get a job if you don’t have a place to go at night,” she added. “It’s sort of a circular problem. It’s very difficult for people who are in deep poverty to start to climb out.”

But some say that any help for the deeply poor—or, for that matter, people who are hovering near the poverty line—that doesn’t emphasize work and self-sufficiency is doomed to fail. Many conservatives argue that job training and work requirements for safety-net programs are the keys to reducing both poverty and deep poverty.

“We have this huge welfare system, and yet the rate of self-sufficiency of Americans has not really improved,” said Rachel Sheffield of the conservative Heritage Foundation. “It doesn't mean that living conditions have not improved, they certainly have. But that was not the intent of the War on Poverty.”