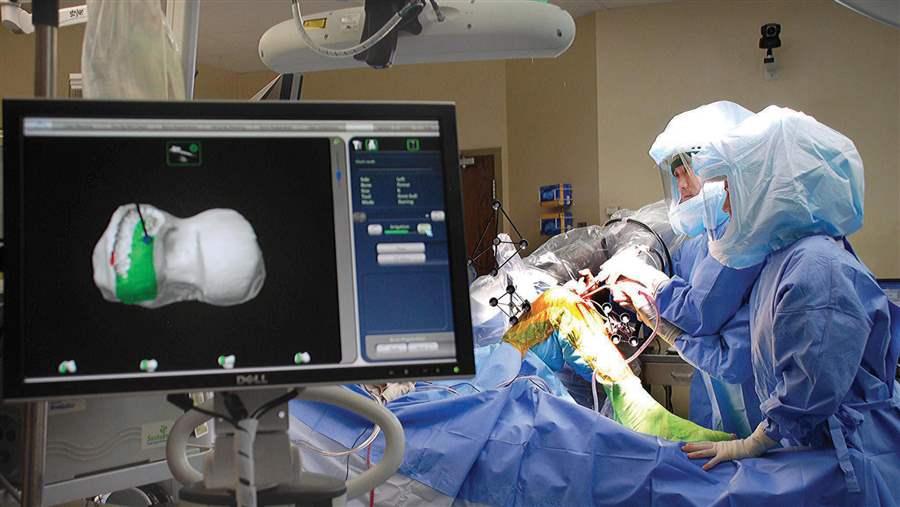 Using a robotic arm and computer screen display, Dr. Thomas Pevny, left, performs a partial knee replacement on a patient at Aspen Valley Hospital in Aspen, Colo. in 2012. Knee replacement surgery is one of the procedures that the Dartmouth Institute for Health Policy & Clinical Practice says varies widely in the rate it is performed across the country. (AP)

Several years ago, a California study showed that a half-dozen elective surgeries were being performed far more often in Humboldt County than they were in the rest of the state. The procedures included hip and knee replacements, hysterectomies and carotid endarterectomies, a surgery to remove plaque buildup in the carotid arteries.

Geographical variation in the delivery of health care can harm patients and increase costs. That is especially true when it comes to surgery, which is usually more expensive and riskier than less invasive treatments. Medicaid makes up a huge portion of state budgets, so the issue of health care variation is a pressing one for states looking to hold down costs.

In Humboldt County, doctors, hospitals, and others involved in health care wondered why surgeons in their area operated so often, and if they could do anything to get closer to the state norms. To find out, they launched the Humboldt County Surgical Rate Project, which brought together doctors, health-care advocates, community organizations, unions, colleges and small employers.

“We weren’t trying to identify anyone as a ‘bad guy,’” said Betsy Stapleton, a retired nurse practitioner who is the co-director of the Humboldt County Surgical Rate Project. “The idea was to identify what was actually happening out there and to figure out ways to address it. It led to really fascinating conversations.”

As it turned out, a large part of “what was actually happening out there” was surprisingly simple: Patients in Humboldt County weren’t playing a big enough part in their own health care decisions.

The interest in Humboldt was spurred by a 2011 report by the California HealthCare Foundation (CHCF) that showed surgical rates for 13 different procedures in all parts of the state. (Since then, CHCF has expanded its study to additional procedures.) The report showed remarkable variation in surgery rates that could not be explained by differences in age, gender, race, ethnicity, insurance status or even local disease prevalence.

For example, even controlling for those factors, the report shows that men living in Tracy, just north of San Francisco, are 479 percent more likely to undergo brachytherapy (internal radiation) for prostate cancer than the statewide average rate. Similarly, women in the northern California city of Healdsburg received lumpectomies without radiation for breast cancer at 248 percent of the state average rate.

CHCF found great variations even between nearby cities. In Clear Lake, northwest of Sacramento, for instance, the rate of coronary artery bypass grafts, which improve blood flow to the heart, was 236 percent higher than the state average while not far away in Deer Park the rate stood at 84 percent of the state average.

For more than 20 years, The Dartmouth Institute for Health Policy & Clinical Practice, which monitors current medical practice in the U.S., has produced similar reports nationwide on particular surgical procedures. The Dartmouth institute uses Medicare data to show variations in how medical resources are distributed, including among racial and ethnic groups. (The CHCF study used all-payer data, which is available in California, meaning that its study included people above and below age 65.)

Most disturbing to Dartmouth researchers from the beginning was that the differing surgical rates did not reflect variations in prevalence of the associated diseases. For example, in its latest report published last week, Dartmouth showed vastly different rates in bariatric surgeries – procedures that limit the amount of food the stomach can absorb – across the country with no correlation to the prevalence of either obesity or Type 2 diabetes, the two conditions that most often lead to those surgeries.

“It is troubling because, in simple terms, you would expect the places (with) the highest obesity rates to have the most operations,” Philip Goodney of the Dartmouth Institute and one of the study’s authors wrote in an email. “But that wasn't the case, so other things are driving the variation. We hope to learn more about these things.”

If anything, the high surgery variation rate proves that medicine is less science than art – if even that. “In the case of surgery, different surgeons have different beliefs about the threshold when surgery is warranted,” said Shannon Brownlee, a senior vice president with the Lown Institute, a think tank concerned with overtreatment in medicine.

“When you see variation in the rate of heart surgeries that doesn’t track the variation in heart disease,” Brownlee said, “you know that it isn’t driven by the medical needs of the population but by something else, and that something else is often the preferences of doctors.”

Those preferences often reflect nothing more than the differences in the experiences of individual doctors.  Where did they get their medical training? Who are their friends within their specialties? What is their proximity to high tech testing apparatus? How open are they to persuasion from pharmaceutical companies? How much are they motivated by financial gain?

“Doctors in one area may do things differently from doctors in other areas,” said Laurence Baker, a Stanford University health economist who provided the data analysis for the CHCF report. “They train at different places, they eat lunch with a certain group of people, they talk to each other, all of that can affect how they go about their practice.”

All of those factors can influence a surgeon’s sense of when surgery is indicated. Laymen who believe that doctors all read from the same playbook may be shocked by the reality. “Many doctors who are outliers in their practice behaviors probably don’t even realize they are outliers,” said Maribeth Shannon, director of CHCF’s Market and Policy Monitor Program.

Some efforts have been undertaken to create more standardized practices. The American Board of Internal Medicine launched an initiative asking all the medical specialties to list procedures and tests frequently performed whose necessity should be questioned by practitioners. The Affordable Care Act also established the Patient Centered Outcomes Research Institute to set benchmarks of effective, evidence-based medical practices. Its projected budget is about $3.6 billion over 10 years.

But as the Humboldt County project concluded, the surgery variation rate is not a problem that can be solved only by attention to physician practices.

Stapleton said that one of the most significant deficiencies in the way health care has been delivered in Humboldt County, as in many places in the U.S., is the lack of participation of patients in their health care decisions. Many are ill-informed or are content to rely on the preferences expressed by their doctors.

“Shared decision-making” has become a buzzword in health care reform in the past few years, but, as Stapleton said, in conversations involving practitioners and patients in the Humboldt County project, “all primary care and surgeons said they did shared decision-making, but it was clear none of them really knew what that was and neither did patients.”

Too often doctors presented patients with his or her recommendation rather than a description of the full range of options and the benefits and drawbacks of each, all in the context of considering the patient’s own preferences and goals. For example, one patient with knee pain might opt for knee replacement surgery, while another would rather forego the intense pain and rehab that surgery would entail.

The Humboldt County project, which received $96,000 from CHCF and the Robert Wood Johnson Foundation for its initial study, got another $105,000 from CHCF to develop a communitywide shared decision-making education program that will be a resource for doctors and patients. CHCF’s Shannon believes correctly shared decision-making will lessen the personal influence of doctors. “If patients are given the choice, you should see less variation in the surgical rates,” she said. “You should see more movement toward the mean.”

“Primary care docs were just looking for options from surgeons but surgeons generally took a referral as a request for surgery and they felt they would be disappointing their referral base if they didn’t do surgery,” Stapleton said.

One of the project’s key recommendations calls for improved communications to assure that both sides understand the purpose of the referral. The project also called for the development of system that makes available to doctors information on the most current treatment protocols.

None of the Humboldt project’s recommendations is binding on providers or patients. “It’s all about relationships, cajoling and moral persuasion,” said Stapleton. But there is enough buy-in from providers and others in the community to hope that change will occur and that, as she said, the “freight train to surgery can be slowed.” The project is now collecting data to see if that is so.