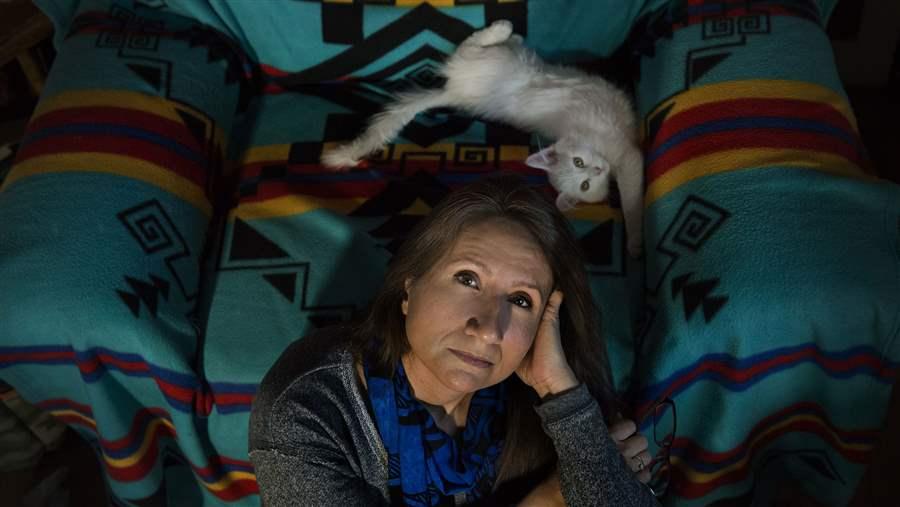 Lisa Brunner, an American Indian, has twice been the victim of domestic violence on the White Earth Indian Reservation in Mahnomen, Minnesota. Advocates say the best way to prevent domestic violence is to use culturally-specific programs aimed at individual demographic groups, but states have been slow to adopt that strategy. (Getty Images)

A woman is being beaten by her husband. The police arrive, but they don’t speak the wife’s language. So her husband, who does speak English, translates. He blames her, and she is arrested.

Or perhaps she’s an American Indian, but her partner isn’t. They both live in Indian Country, but because he’s not native, he can’t be arrested by tribal police—and the nearest non-tribal police station is a hundred miles away.

Or maybe she came here from Bangladesh as a bride in an arranged marriage. After a particularly brutal battering by her husband, she gets an order of protection, but it lasts only for a short amount of time. She doesn’t speak English, doesn’t have a green card, and doesn’t have money. In fleeing her husband, she and her child end up homeless.

Domestic violence can happen to a person of any race or ethnicity, whether she is well off or barely scraping by. But certain groups face stressors, such as economic instability, racial discrimination or immigration troubles, which can make them more vulnerable. For that reason, advocates say, the best way to prevent domestic violence is to use culturally specific programs aimed at individual demographic groups.

The need is urgent: According to the Violence Policy Center, a woman is far more likely to be killed by her spouse, an intimate partner or family member than by a stranger. In homicide cases in which police can determine the relationship of the victim to her killer, 93 percent of female victims were murdered by someone they knew.

States are increasingly interested in reducing domestic violence. Some, such as South Carolina, have recently formed task forces to address the issue.

Last year, Texas legislators created a panel of medical professionals and domestic abuse experts to study the effects of family violence on mothers and children. (In 2012, 114 women in Texas were killed by a domestic partner.) Its report, which is due in 2015, will focus on early detection of domestic abuse. A similar task force in Vermont recommended engaging men in domestic violence prevention and strengthening colleges’ responses to on-campus partner violence and sexual assault.

For the most part, recent state legislation has concentrated on housing and employment protections (such as prohibiting landlords from evicting battered women for calling the police); broadening definitions of abuse (to include, for example, teenagers who are battered by boyfriends); and protecting the confidentiality of domestic violence shelters and counselors, said Rochelle Finzel of the National Conference of State Legislatures.

In Connecticut, a team of women legislators introduced a bill in January addressing sexual assault and dating violence on college campuses in the state. The bill, which was signed into law in May, came after a group of students last year sued the University of Connecticut for allegedly mishandling rape cases. The university admitted no wrongdoing, but settled the suit for $1.3 million this summer.

And just last week, in the wake of the NFL football player Ray Rice scandal, the New Jersey Assembly passed a package of six bills aimed at protecting women from domestic abuse. (The bills were written prior to the domestic abuse incident involving Rice and his then-fiancee.)

But no state is trying to prevent domestic violence by focusing on specific demographic groups, according to the National Conference of State Legislatures. Advocates say that’s a problem.

“What works for one victim or 20 victims might not work in another part of the city or the state,” says Michael Polenberg, vice president of government affairs for Safe Horizon in New York City. “It might not work two blocks from where you’re standing. There should be a diverse range of options for victims of crime to get help that recognizes cultural and linguistic differences.”

Nonprofit organizations are picking up the slack, often with federal money distributed by the states. Last week, the MacArthur Foundation awarded one of its “genius grants” to legal scholar Sarah Deer, a citizen of the Muscogee (Creek) Nation of Oklahoma, for her work advocating for Native women, who suffer the highest rates of violent crime in the country.

Because the movement to help battered women largely has been driven by white, middle-class women, said Deer, a professor at the William Mitchell College of Law in St. Paul, “the attention is on generic domestic violence, (without legislators) really thinking about the nuances of race and class.”

The Complexities of Culture

Advocates stress that states must consider the influence of race, culture and other demographic factors to craft effective strategies. African-American women, for example, are most likely to be killed by an intimate partner. Domestic abuse among Asian/Pacific Islander communities often involves more than one family member battering the same victim in the home, according to the Asian & Pacific Islander Institute on Domestic Violence. And Latinas are less likely to seek help from a shelter, preferring to find protection from friends and family.

Many find barriers to treatment and resources. The Gay Men’s Domestic Violence Project was founded in 1994 in Cambridge, Massachusetts, by a gay man who was denied services by local mainstream domestic violence shelters after his partner tried to kill him.

Men who batter also benefit from culturally specific treatment programs, says Dr. Oliver Williams, a professor at the University of Minnesota and the co-director of the Institute on Domestic Violence in the African-American Community. The traditional method to treat men who’ve been convicted of domestic abuse is using a cognitive behavioral approach called the Duluth Model, a program which got its start in Duluth, Minnesota, in the early 1980s and which uses court-ordered educational programs for offenders. Williams said the Duluth Model can be an effective tool, but it doesn’t take into account the experiences of men of color or poor white men.

“A lot of people doing the work over the years have been middle-class men and shaping (programs) around middle-class realities,” said Williams. “Sometimes you have to shape policy around the people and their reality.”

At the federal level, domestic violence legislation is beginning to reflect demographic differences. In 2013, President Barack Obama signed a revised version of the 1994 Violence Against Women Act. The new law includes domestic violence protections for gays and lesbians and authorizes tribes to criminally prosecute non-Indians for domestic and dating violence.

Grace Huang, who has been fighting domestic violence in Washington state for a dozen years, said state legislators there tend to be sympathetic to the cause, but some have a hard time grasping the particular problems facing minority and gay and lesbian victims. Much of their energy, she said, has been focused on increasing criminal penalties.

“These are crucial responses, but a very, very small part of what we hear survivors tell us they need,” says Huang, the policy director for the Washington State Coalition Against Domestic Violence. Some survivors, for example, are reluctant to live in a shelter if their language is not spoken there. What they really want is a housing voucher so they can find their own home, Huang said. Her group has used a combination of state, federal and private money from the Bill & Melinda Gates Foundation to create programs that target communities of color.

Groups such as Casa de Esperanza in St. Paul, and Sakhi for South Asian Women, in New York also focus on the cultural needs of specific populations. Casa de Esperanza, which was started in the early 1970s to educate Latinas about domestic violence, is now a national institute that advises other organizations around the country. The idea is to provide options that go beyond the traditional domestic violence model of providing shelters for battered women and children, which can be a short-term solution.

In Westchester County, New York, the Hispanic Resource Center offers services such as job training, computer lessons, landlord mediation and legal assistance. The center is a place where domestic abuse survivors can get help without drawing attention to themselves by going to a domestic violence center, said Rosie Hidalgo, senior director of public policy and advocacy for Casa de Esperanza.

Some advocates say such groups don’t necessarily need a lot of state involvement to function well.

“Nonprofits are really in a better position to invest in social change as opposed to state governments,” says Tonya Lovelace Davis, senior director of the Women of Color Network (WOCN), a project of the National Resource Center on Domestic Violence.

“You’ve got to be able to challenge systems,” she said. “We’re not just trying to get you safe. We’re here to make social changes across the country around domestic violence, the same way attitudes toward drunk driving changed.”