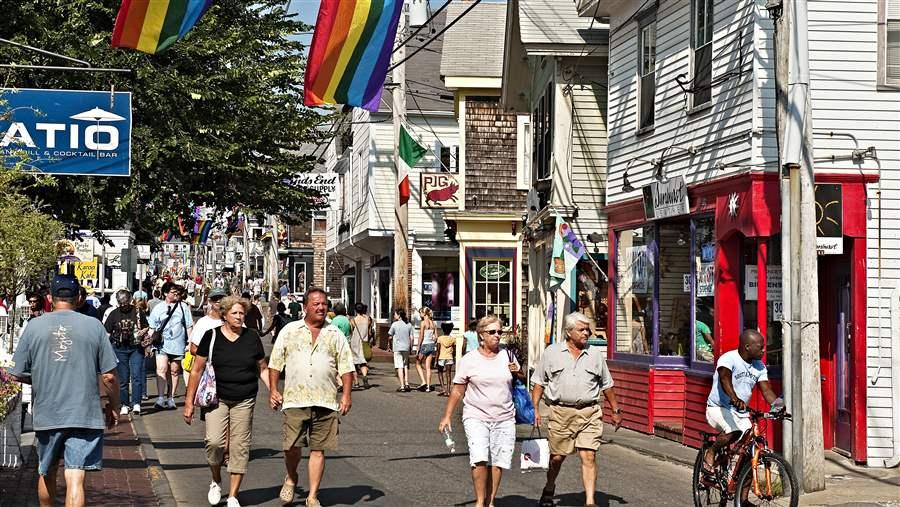 Pedestrians on Commercial Street in downtown Provincetown, Massachusetts, enjoy a sunny August day. Provincetown leaders may institute a two-tier property tax system that would raise taxes on summer residents while sparing those who live in the seaside town year-round. (Getty)

More states and local jurisdictions across the country are considering whether seasonal residents should pay higher property taxes than year-round homeowners for the privilege of enjoying the seashore, the woods or warm winter weather. The efforts are stirring deeply-rooted resentments and rivalries between “townies” and “summer people.”

“Hit the snowbirds and the tourists,” said David Brunori, deputy publisher at Tax Analysts, which examines state tax law and policy.  “One of the great ways of exporting the tax base is to tax people from out of state who rent property, own property or work in the state. It’s a political nirvana. They don’t vote.” In recent years, Brunori said, two-tier systems have become increasingly attractive to jurisdictions desperate for new sources of revenue.

A large number of states have a “homestead exemption,” which lowers the property tax bills for certain categories of homeowners, usually full-time residents. Some of the exemptions are income-based, while others apply to categories of homeowners such as widows or widowers and military families. In general, the exemptions do not apply to second homes of any kind, particularly vacation homes.

Homestead exemptions are one way to protect local homeowners while taxing vacationers at the full market value. The other way is to increase taxes on vacation homes directly.

According to the 2000 U.S. Census, the most recent year for which complete numbers are available, there are about 3.6 million vacation homes nationwide, making up 3.1 percent of all housing units. The percentage of vacation dwellings has hovered around 3 percent in every census since 1960, so it’s likely that current numbers are comparable. Fourteen states have more than 5 percent of their dwellings in the vacation home category. Maine and Vermont have the highest percentage of vacation homes, 15.6 percent and 14.6 percent, respectively.

Provincetown, Massachusetts, a tiny seaside town of about 3,000 in the winter that is a tony summer playground for more than 30,000 during the short New England summer, is weighing a homestead exemption for year-round residents that would subtract a maximum of about $700 from their annual property tax bill and add a maximum of about $700 to the property taxes of seasonal residents. The plan would not raise revenue overall, unlike some other efforts, but it would shift the town’s tax burden.

“It’s not about charging them (seasonal residents) more, it’s about finding ways to stabilize the population so we can keep people in their homes,” argued Tom Donegan, chairman of the Provincetown Board of Selectmen. “(Year-round residents) are retired men and women and working men and women. Their homes are increasing in value and they have to pay increased property taxes, usually on a small or fixed income.”

“People have been in their homes for long periods, sometimes for a generation, and they find their biggest expense is their tax bill,” said Donegan, adding that Provincetown has lost about 15 percent of its year-round population in the last 15 years because full-time residents have been priced out.

Donegan also noted that town services have to be able to serve the summer population of 30,000, even though the year-round population is a tenth of that.  He said the town spent $900,000 on an ambulance corps suitable for a population of more than 30,000, not to mention increased water and sewer facilities. He acknowledges, however, that the economic boost from the summer season is “what keeps the town going because the fishing industry has declined.”

Not surprisingly, Provincetown’s summer residents are not happy with the tax proposal, which will be the subject of public hearings before the vote later this year. “It’s hurtful and alienating. It’s not just about math,” Mary Ann Bosworth, a nonresident property owner who shares a seasonal house with her cousin, told the Provincetown Banner.

A similar two-tier tax structure exists on the island of Nantucket, off Cape Cod, which also has an influx of summer people.  But the Cape Cod town of Mashpee had to abandon the idea earlier this year in the face of strong opposition from both winter and summer residents.  Joyce Mason, town manager for Mashpee, said it was “pretty clear folks were not in favor of splitting the community. The board voted 4-1 against doing it.”

In adopting two-tier tax systems, states and communities are emulating Florida, which has been employing versions of the strategy since the Great Depression. Florida has two ways to protect year-round residents, both of which result in vacation homeowners paying higher property tax bills.

There is a homestead exemption which provides residents with an automatic $50,000 reduction in the assessed value of their primary residences. And, in 1995, the state amended the constitution with a “Save Our Homes” provision, capping the annual increase in assessments at 3 percent or the inflation rate, whichever is lower. This also applies only to permanent residents.

Kurt Wenner, vice president for tax research at Florida Tax Watch, a consumer group, said when home values started falling in the recession, “a lot of taxes that had been shifted away from the homestead residences got shifted back to them. Now, with property values rising, the tax burden is shifting back again to the nonhomestead” properties, many of which are owned by out-of-staters.

He said seasonal residents were up in arms about the procedure before the recession, but the hue and cry diminished when everyone’s property values fell. Now, he expects seasonal residents to ramp up their protests. Part-time Florida residents could declare their “permanent” home to be Florida and then qualify for the tax breaks, but that would mean giving up residency in their other home state and whatever their resident tax rate is there. It’s a balancing act.

A move to change the Florida constitution to expand the homestead exemption to first-time homebuyers as well as cap the assessment increases for part-time residents at 5 percent a year was defeated in 2012, 56.8 percent to 43.1 percent, proving the point that nonresidents don’t have as much voting power as residents.

In Minnesota, Democratic Gov. Mark Dayton proposed a $500 property tax rebate for permanent homeowners and a $30 million income tax hike on “snowbirds,” Minnesotans who spend the winter in warmer climates. Under current law, only people who live in Minnesota for more than six months of the year must pay state income taxes. Dayton’s proposal would have levied state income taxes on anybody who spent 60 or more days a year in Minnesota, and required them to pay a prorated portion of their income taxes in the state.

The plan did not fly, but the governor did sign into law an income tax hike, which raised the top marginal rate from 7.85 percent to 9.85 percent.

The Minnesota Department of Revenue also tries to prevent snowbirds from evading state taxes by determining residency based on other factors besides time spent in the state, such as the location of a person’s bank accounts and doctors.

Liz Malm, an economist with the tax analyst group Tax Foundation, says there are two sides to this issue. “Obviously, we are all advocates of the benefit principle – if you use a service you should have to pay for it,” she said. “But on the other side of the coin, nonresidents shouldn’t have to pay for all of it. There is a desire to not tax me, tax somebody else.”

In New Jersey, which has high property taxes but does not have a two-tier system, the issue of summer residents being able to vote surfaced at a town hall meeting in Ocean City in August with Republican Gov. Chris Christie.

Christie said he might be open to the idea, noting that summer residents “have a big stake in this state” not to mention making a big contribution to the state’s overall economy. But, the governor said, there was a concern about the possibility of voter fraud, and he would consider a change only if it included a method to track voter registration in other states.