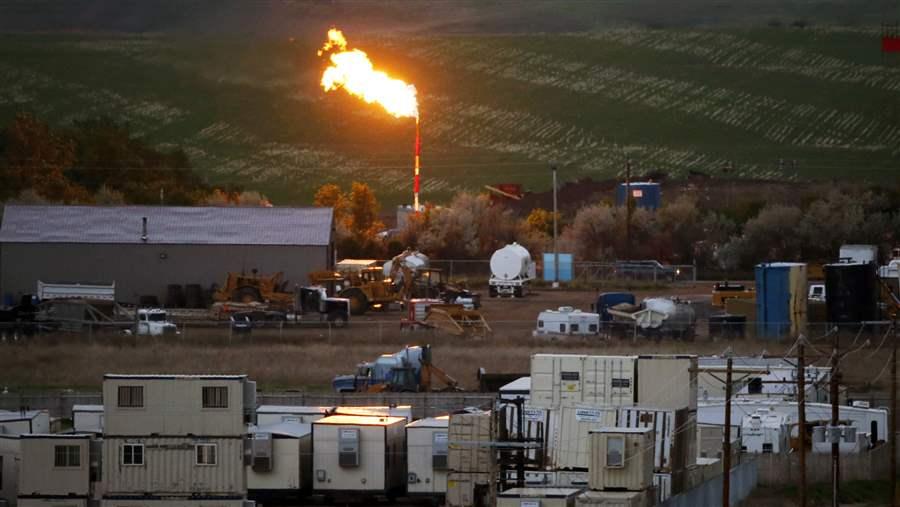 Natural gas burns off at an oil extraction facility in Williston, North Dakota. The state’s western “oil patch” has boosted the typical industry pay to $115,000, giving the state the largest income increase in the country since the recession, according to a Stateline analysis. (AP)

In one state, a high-school dropout can land a six-figure job.  In another area of the country, only college graduates can compete for that kind of salary.

Income growth has been stagnant (without adjusting for inflation) in many states since the recession, but a Stateline analysis of Census Bureau data released today shows a wide variation between some states, from booms in the District of Columbia and the oil-producing states of North Dakota and Wyoming to shrinking paychecks in Nevada, Georgia and Arizona.

But the wealthiest 5 percent of households experienced double-digit income increases in 12 states, and their incomes grew by a greater percentage than the earnings of middle-income (the middle 20 percent) of Americans in all but eight states. The biggest contrast was in New Hampshire, where the incomes of the wealthiest residents grew 14 percent to $339,000, while middle-income earnings remained stagnant at around $64,000.

Kevin Iverson, manager of the North Dakota census office, said a typical oil industry worker there now makes $115,000 or more, making it hard for other businesses to compete. Some restaurants have closed or cut back hours because they can’t find enough workers, he said.

“You have kids dropping out of school, because why should you go to college when you can get $60,000 to start in the oil field – or get your commercial driver’s license and you’ll start at $80,000, easy?” said Glenn Muske, acting director of Center for Community Vitality at North Dakota State University. To compete for workers, some fast food chains have been offering as much as $15 an hour.

But with prices rising quickly, and apartment rents up from $600 to $2,400 in many cases, “I suspect those high median incomes are going right out the door again in cost of living,” Muske said.

College degrees may not matter for now in North Dakota, but they do in the District of Columbia, said Jenny Reed, deputy director of the DC Fiscal Policy Institute. The institute’s research shows that District residents with at least a four-year degree have done well financially, but others struggle in a local economy dominated by the federal government, lobbyists, law firms and academia.

“Those with a bachelor’s degree are getting a lot of the well-paying jobs that are being created here. If you have that college degree, you’re doing well. Your wages are rising,” Reed said. “If you don’t, you are really struggling.”

Incomes are rising because job growth has been fastest at the top of the wage scale, Reed said, and also because the District is attracting affluent newcomers from other parts of the country. After inflation, she said, wages for unskilled work slipped from $13 an hour to $12 since 2008, while increasing for skilled professions.

“The gap between low-wage and high-wage workers is now at the widest level it has been since 1979,” Reed said.

Some of the high energy prices fueling salaries in North Dakota and Wyoming, the nation’s top coal producer, are taking a toll on income in Nevada, where tourism has waned because of rising travel costs.

“The cost of airline tickets is really driving traffic down for our tourist sector,” said Jeff Hardcastle, Nevada’s state demographer. “It was really a triple whammy for us – we got hit by the end of the housing bubble, the high fuel costs and gas prices and the drop in the financial sector really affected the active elderly and the people with second homes here.”

On a positive note, mining activity and the gaming industry have rebounded in Nevada, causing some small income gains in recent years, he said.

Maryland has the top median income in the nation, at $73,022, followed by Alaska at $72,626 and New Jersey at $70,223. Since 2008, Alaska has overtaken New Jersey and Connecticut to become the state with the second highest median income, thanks to a 6 percent increase.

Maryland’s income did not change significantly, said demographer Mark Goldstein of the Maryland Data Center, but commuting times, already among the nation’s highest, are on the rise. That may mean more people are commuting farther to places like Washington, D.C., to earn a living, he said.

“In a smart-growth environment, you would hope that the workers and jobs are relatively close to each other,” Goldstein said.