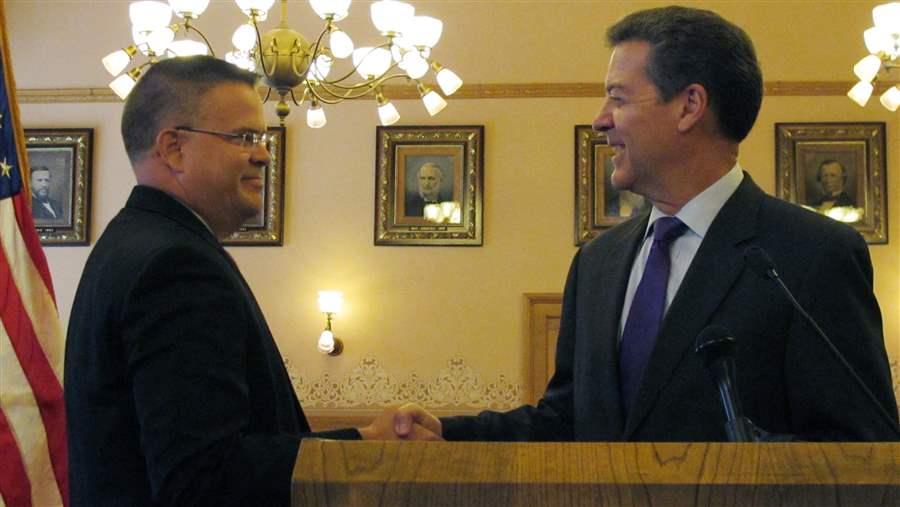 Caleb Stegall, left, shakes hands with Republican Gov. Sam Brownback last month, when Brownback appointed his former chief counsel to the Supreme Court of Kansas, a state in which control of the court has become a political and ideological battle. (AP)

WICHITA, Kansas—Shortly before Christmas in 2000, brothers Reginald and Jonathan Carr went on a brutal robbery, rape and murder spree that left five people dead and traumatized this city, the state’s largest.

The Carr brothers were convicted and sentenced to death. But in July, the Kansas Supreme Court set aside the death sentences for the notorious killers, shocking many Kansans and adding fuel to a debate over how justices on the state’s highest court should be chosen.

To state Senate Majority Leader Terry Bruce, a Republican,  the court’s decision to overturn the brothers’ capital murder convictions on technicalities is only the latest example of the court defying public sentiment—and a compelling argument for why Kansas residents should have a more powerful voice in choosing their top judges.

In several states, including Kansas and Florida, state legislators have been debating how justices for state supreme courts should be chosen. Meanwhile, elections to win or retain court seats increasingly have become big-money contests, with political parties and special interests pouring in campaign dollars to try to help elect or unseat justices in more than a dozen states in recent years.

The stakes in the political and ideological battle over choosing justices are high: State supreme courts review local courts’ criminal and civil verdicts and the constitutionality of state laws, and about 95 percent of all legal cases are filed in state courts, according to a 2008 report.

Some politicians, such as Bruce, argue that the courts should more closely reflect public opinion. But advocates of an independent judiciary argue that justices should be able to make decisions free of political and special-interest pressure. They warn that forcing judges to curry political favor or compile huge campaign war chests to win elections threatens that independence.

“Courts are under threat,” said Alicia Bannon, who monitors state courts at the Brennan Center for Justice at New York University’s School of Law. “What they (special interests) are trying to do is shape who’s sitting on our courts and shape decisions.” 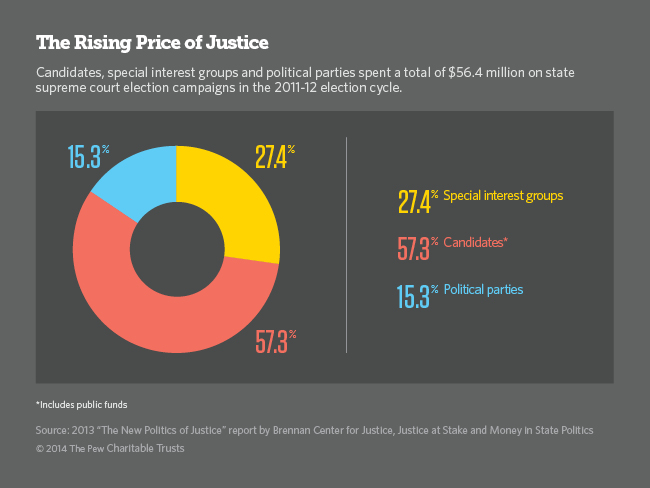 States vary in how they choose their Supreme Court justices.

Twenty-two states have contested elections, some of which are nonpartisan, according to Justice at Stake, a nonpartisan organization that advocates for fair and impartial courts.

In nearly all the others, governors appoint judges, though typically they must choose from a list of candidates nominated by a commission often chosen by state bar associations. Sixteen of those states have retention elections, which allow voters to decide whether to retain sitting justices.

Thirty states have had or will have elections this year to either elect or retain justices, according to Justice at Stake. Some of the races are uncontested and noncontroversial. But eight states have contested elections in November and 14 will have retention elections. It is expected that races this year will cost more than the $56.4 million reported spent in the 2011-12 election cycle.

More than $3.1 million has been spent this year on television ads in elections already held in Tennessee, Idaho and Arkansas and in a May primary election bid to unseat a North Carolina justice, Justice at Stake and the Brennan Center reported earlier this month.

Many justice groups that favor impartial courts are alarmed by rising costs of campaigns and fear that special-interest money will have a corrosive effect. Bert Brandenburg, executive director of Justice at Stake, said the phenomenon has worn away at the public’s perception of fairness in the courts.

“The public has become firmly convinced that justice is for sale,” he said.

Former U.S. Supreme Court Justice Sandra Day O’Connor rang the alarm this summer, saying she’s been “distressed to see persistent efforts in some states to politicize the bench and the role of our judges.”

In response, she issued a model “O’Connor Plan” for selecting state supreme court justices. She advocates the creation of broad nominating commissions to present candidates to governors, a nonpartisan review of their performance and retention elections to give the public an opportunity to remove justices for poor performance.

However, the trend in many of the states that have similar systems, including Kansas, is to move toward a system with a greater role for governors and legislatures, said William Raftery at the National Center for State Courts, an independent court-improvement and research center based in Williamsburg, Virginia.

Raftery said many governors and legislatures are now pushing for a federal-style system, under which governors would appoint justices and legislatures would confirm them. Raftery said many governors and state legislators are tired of the courts overturning their laws. They think lawyers have too much say in nominating candidates with liberal judicial philosophies, and see justices as more beholden to the legal community than the electorate.

That’s the view of Bruce, the GOP Senate leader in Kansas, where the Supreme Court hasn’t upheld any death penalty sentence under the state’s current law. Furthermore, twice in last decade the court has rejected the state’s school-finance system, approved by the legislature, as inequitable or insufficiently funded.

“The Kansas Supreme Court has demonstrated over and over again its reluctance to carry out the death sentence,” said Bruce, who is a lawyer. “The Carr brothers’ case is just another example of this. Not only is this view out of step with public sentiment, my greatest concern is that it erodes the rule of law.”

Bruce said the people of Kansas should have a say in judicial selection via their elected representatives and get away from a system that is dominated by lawyers. The Kansas nominating committee that sends three names to the governor to pick from has five lawyers appointed by the state Bar Association and four non-lawyers.

States’ systems for choosing justices typically are written into state constitutions, which aren’t easy to amend. They often require a two-thirds vote of each legislative chamber and ratification by voters.

That’s true in Kansas, where last year the Senate passed a proposed constitutional amendment to move to a federal-style system of appointments. It failed in the House, however.

Some Democrats and lawyers worry that the GOP-dominated Kansas Legislature and Republican Gov. Sam Brownback want to pack the court with justices who share their politics and ideology – and are using death penalty decisions as an excuse to scrap a merit selection process designed to deter political cronyism.

“They’re trying to use the emotional case of the Carr brothers to say the court is too liberal and needs to be changed,” said state Rep. Jim Ward, a lawyer and member of the House Judiciary Committee. Ward, a Democrat, argues that “extreme conservatives” want to pack the court. “This (Carr decision) had nothing to do with conservative or liberal. Legal questions were involved.”

Ward warned that abandoning Kansas’ current system could result in cronyism. He points to how Brownback named his former chief counsel, Caleb Stegall, to the Supreme Court last month.

Political cronyism is what moved the Kansas Legislature and voters to adopt the state’s current merit selection system.

In the “Triple-Play” scandal of 1956 and 1957, then-Gov. Fred Hall maneuvered to install himself as chief justice of the Kansas Supreme Court after losing a re-election bid. Hall resigned near the end of his term as did his friend, Chief Justice William Smith. Lt. Gov. John McCuish became governor and named Hall as the court’s new chief in Smith’s place.

“This (merit system) has served the people of Kansas well for more than 60 years,” Ward said. “We haven’t had any scandals since.”