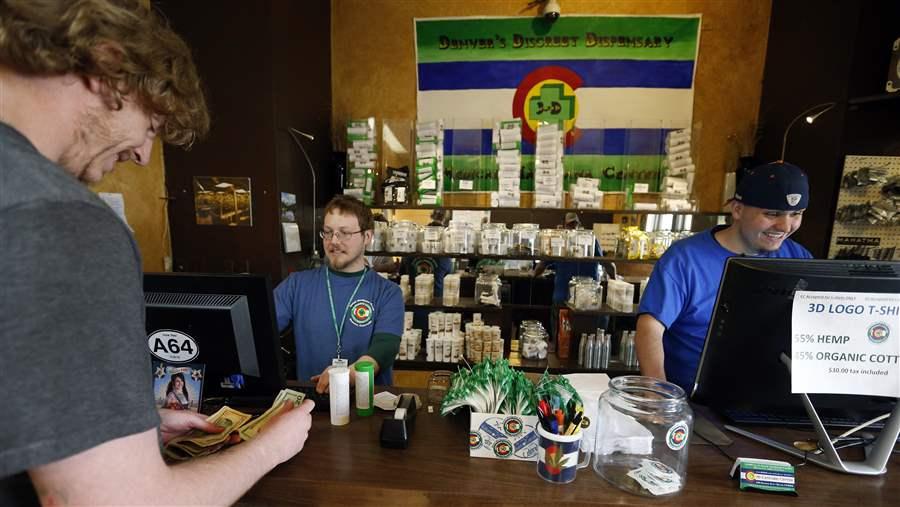 A customer pays cash for retail marijuana at 3D Cannabis Center, in Denver, Colorado, one of two states where recreational marijuana is now legal. Many states are watching to see how much tax revenue legalized marijuana brings in – so far in Colorado, sales have been far under projections, although they continue to grow. (AP)

When voters in Alaska, Oregon, Washington, D.C., Florida and Guam head to the polls in November to decide whether to legalize marijuana, either for medical or recreational use, some may wonder how much new tax revenue legalization might bring in.

The answer, according to early returns in Colorado and Washington: nobody knows.

In Washington, which opened the doors to recreational marijuana (also known as retail or adult-use marijuana) on July 9, the state expects to collect taxes of $3 million on sales of $12 million as of September 8. Washington imposes taxes of 25 percent at the producer, processor and retail levels. Because state officials were unsure how much revenue the new market would bring in, the state is not counting it as revenue to fund its current two-year budget

In Colorado, sales of retail marijuana have reaped about $18.9 million in state taxes (with a percentage to go to local governments) from January through June 30, according to the state Department of Revenue. That’s about 46 percent of what the Colorado Legislative Council, the nonpartisan research staff to the state’s General Assembly, predicted before legalization. But sales of retail marijuana are continuing to climb, and reached their best month yet in July.

Advocates of legalization say that however much tax revenue legal marijuana generates, it is money that would have otherwise ended up in the black market.

“We believe the figures we’ve seen come out of these two states so far have been overwhelmingly positive, especially when contrasted with the previous policy of prohibition,” said Erik Altieri, spokesman for the National Organization for the Reform of Marijuana Laws (NORML), which lobbies in favor of legalizing marijuana.

But Calvina Fay, executive director of the Drug Free America Foundation, which opposes the legalization of marijuana for recreational use, said the revenue raised will not be sufficient to cover costs to society of increased marijuana use.

“If you look at alcohol and tobacco, at a national level, we are not raising enough in tax revenues to cover the societal costs related to those two drugs,” Fay said. “Why would we think marijuana would be any different?”

Among the states that are watching are Alaska and Oregon, which have ballot measures to tax and regulate the production, sale and use of non-medical marijuana. Washington, D.C. could allow the possession of up to two ounces of marijuana. Voters in Florida and Guam will consider legalizing medical marijuana.

Before Coloradans voted in 2012 to legalize recreational marijuana, pro-legalization advocates aired a jingle: “Jobs for our people. Money for schools. Who could ask for more?”

But estimating revenue for a new market – particularly for something that was previously illegal – is a tricky enterprise. (Recently, states have also struggled to accurately forecast tax revenue from online gambling, for example.)

Even now, it’s hard to tell exactly why the state’s projections were too high, according to Larson Silbaugh, a senior economist with the Colorado Legislative Council who worked as part of a team to forecast marijuana tax revenue.

“You’re forecasting an illicit drug and there isn’t good, reliable information on it,” Silbaugh said.

In Colorado, retail marijuana is subject to a 15-percent excise tax, which is based on the wholesale market rate, and a 10-percent tax on retail sales, in addition to the 2.9-percent retail tax that is also charged on medical marijuana. Last fall, voters approved the 15-percent and 10-percent taxes, with the first $40 million from the 15-percent excise tax earmarked for school construction projects and the proceeds from the 10-percent tax dedicated to paying for the regulations governing legalized marijuana, such as licensing retailers. One reason recreational marijuana sales have been lower than predicted is that fewer people than expected have shifted from medical marijuana to retail marijuana.

State Rep. Dan Pabon, a Democrat who chairs a special legislative committee on marijuana revenue, said another problem is a provision in Colorado law that allows “caregivers” to grow medical marijuana for other people.

"What we’ve seen is caregivers may be diverting product from their patients and putting it onto the black market,” Pabon said. “That’s having an impact on recreational sales because people aren’t going to the regulated market as much as we had planned for.” Some longtime marijuana users, it seems, are reluctant to abandon their trusted suppliers, even though there is now a legal alternative. The committee is considering legislation aimed at tightening up regulations around caregivers, Pabon said.

Phyllis Resnick, lead economist for the Colorado Futures Center at Colorado State University, said that while lower taxes may be one reason many people have stayed with medical marijuana, she expects that eventually more users will shift to the retail market rather than renew the paperwork required to use medical marijuana, for example.

The retail environment for recreational marijuana in Colorado is changing day to day. For example, local jurisdictions determine whether to allow retail marijuana stores, so more stores are opening as more cities and counties approve them. Aurora, the state’s third-largest city, recently awarded its first licenses, for example.

Another change that could affect sales: Under current state rules, those in the marijuana business must both produce and sell marijuana, but starting in October, businesses can choose to do one or the other.

“With any new market, it takes a while for it to settle,” Resnick said. “It’s not going to find its resting place probably for another year or more.”

Lessons for Other States

Twenty-three states and the District of Columbia currently allow medical marijuana, according to the National Conference of State Legislatures (NCSL). Another 11 states allow limited access to specific medicinal products with low levels of THC, the active ingredient in marijuana. Many of the states that allow medical marijuana tax it through a general sales tax, as over the counter medications are typically treated, according to Karmen Hanson, a program manager for NCSL.

The Marijuana Policy Project, which lobbies to end the prohibition of marijuana, has campaigns to legalize non-medical marijuana through ballot initiatives in a number of states, including Arizona, California, Maine, Massachusetts and Nevada. They are also pushing legislation in Rhode Island, Vermont and New Hampshire.

The Colorado Futures Project’s most optimistic projections for marijuana tax revenue were in the neighborhood of $100 million annually, she said. Meanwhile, the state is facing long-term budget gaps in the range of $2 billion-$3 billion.

Hanson said many states are hoping to learn lessons from Colorado and Washington.

“People are looking to Colorado and Washington as examples of is it going to fly or sink and it’s like any new program – it’s going to have needs and fixes that come down the road,” Hanson said. “Some will be apparent pretty quickly and some will take some time to show.”