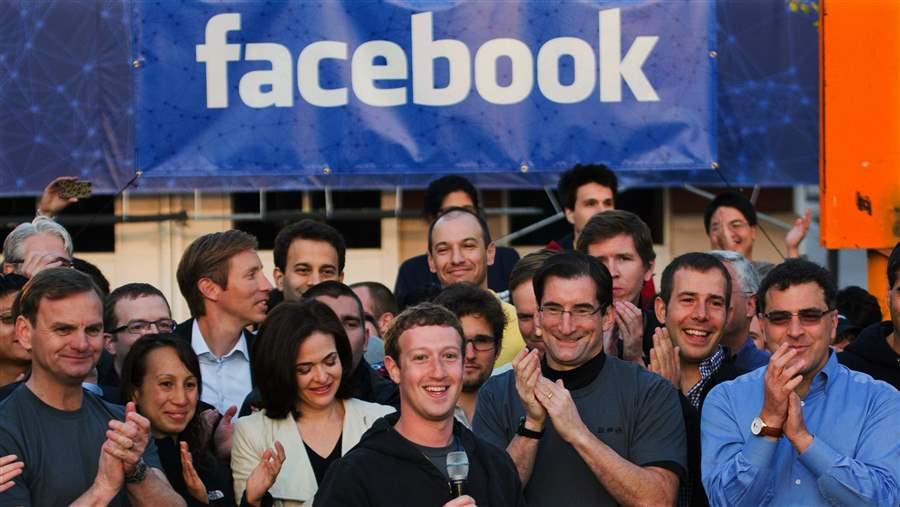 Facebook founder Mark Zuckerberg rings the Nasdaq opening bell from Facebook headquarters in Menlo Park, California, on the day of the company’s initial public offering (IPO) of stock. The financial impact of the IPO was so large California officials had to include it in their revenue calculations that year. (AP)

The wealthiest Americans can move markets at home and abroad with their business decisions. When they sell massive quantities of stock, receive huge bonuses or suffer crushing losses, those events also can have a significant impact on state finances, especially in small states that collect taxes on income or capital gains.

The problem is that billionaires don’t typically telegraph their financial moves, let alone to state officials. That leaves revenue estimators guessing whether they can count on a windfall in the upcoming fiscal year, or whether they have to figure out how to plug a gaping hole.

To eliminate some of the uncertainty, revenue estimators in many states interview financial planners and economists to help them predict what billionaires might do, and what the tax consequences of those moves might be for their states. Financial planners can’t divulge what they will advise individual clients to do, but they can give state revenue forecasters some idea about the type of general advice they will be providing.

Lyman Stone, economist at the tax policy research organization Tax Foundation, said it’s prudent for states to take into account all aspects of anticipated revenue, even if the income taxes of high earners, especially capital gains taxes, are hard to predict. “Smaller or mid-sized states with one or two billionaires – that’s not something you can ignore. States with income taxes would have an interest in tracking that,” he said.

Take Arkansas, where a handful of wealthy taxpayers “can make a huge difference” in state revenues, said Richard Weiss, director of the Arkansas Department of Finance and Administration.

Arkansas is home to Jim Walton, an heir to the Wal-Mart company fortune. While Weiss said his department can’t “go to the extent of getting specific information” from individual taxpayers or their financial advisers on what they plan to do in a given year, the agency does make it a priority to cultivate warm relationships with the state’s heaviest hitters. 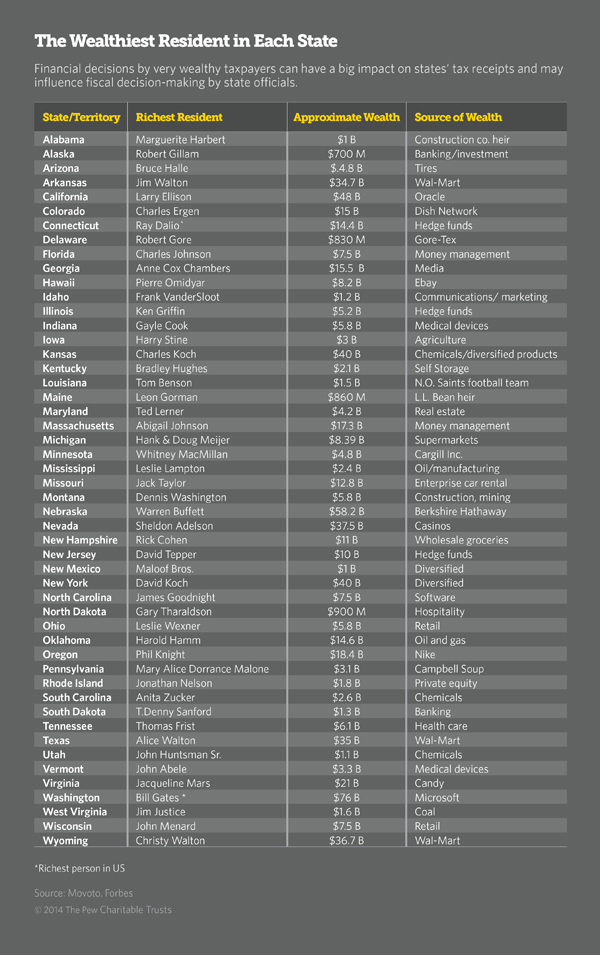 “We don’t do anything that is proprietary, I don’t think we try to meddle in their business either,” he said. “There’s a fine line there. All the folks we have in the revenue department and our economic analysts are very cautious of that. We look at lots of trends to get some idea of what’s going on.”

Revenue estimators employ a similar technique in Oregon, where the biggest billionaire is Phil Knight, founder of Nike, who is worth an estimated $18.4 billion. “Our economic advisers maintain good relationships with the big accounting and law firms, and while they can’t talk about individual taxpayers, they get an idea how those tax advisers will generally advise their clients,” said Oregon Budget Director George Naughton.

“With personal income taxes, the decisions that certain individuals make could certainly have an impact on your revenue forecast. It depends on how big the move is. If they are selling a billion dollars worth of stock, that can be significant enough to notice in the revenue,” Naughton said.

Ken Heaghney, state fiscal economist for Georgia, said his state convenes a panel of advisers, including a bank economist and the head of a local wealth management group, to get a sense of what the state’s wealthiest residents are likely to do.

Heaghney said the impact of wealthy taxpayers in Georgia is blunted by the fact that the state has a relatively low tax on capital gains and a flatter income tax structure than most other states. However, he said one person could make a difference in state revenues if the decision involves enough money and is Georgia-based. “We don’t generally have that kind of taxpayer here, unfortunately,” he said. “As for the Chambers family (Anne Cox Chambers is the richest resident in the state) most of their wealth is in trust funds and sheltered in various ways,” he said.

Nebraska, home to Warren Buffett, who is worth about $40 billion, also scans the financial landscape with economists and financial advisers before doing its revenue forecasts, according to Gerry Oligmueller, state budget administrator. But state officials don’t ask about any one individual, even the so-called “Oracle of Omaha.”

“The implications of what any single corporation will do, what’s going on with federal tax policy, all have to be rolled together to be considered in determining what’s the best forecast for tax receipts for the next fiscal year,” Oligumueller said.

In California, which has 111 billionaires, more than any other state, revenue estimators were keenly interested in Facebook’s initial public offering of stock in 2012.  With thousands of Facebook employees in the state in line to receive valuable stock options, it was a safe assumption that the IPO would have a revenue effect.

“We generally do not base our forecasting on individual wealthy individuals,” said California Budget Director Michael Cohen. “California’s economy and taxpayers are too diverse. One exception is with the Facebook IPO—there was enough public information and the one-time event was large enough for us to try to capture the IPO’s effect on revenues separately.”

A state study of the anticipated effect of the IPO estimated that nearly 1 percent of all personal income in the state in 2012 would be related to Facebook. While original estimates of revenue to the state were in the $1.6 billion range, Cohen said that was later revised over the following six months to $1.25 billion.

Cohen said the extra revenue anticipated from Facebook IPO was designated as a one-time event and placed into the overall revenue estimate rather than, for example, a rainy day fund.

Matthew Gardner, executive director of the Institute on Taxation and Economic Policy, said windfalls such as the Facebook IPO are a challenge for estimators. “For California policy makers, it was like walking down the street and finding a $20 bill,” Gardner said. “For every good year you have, there’s going to be a less good year down the road.”

A handful of states, including Hawaii, California, Oregon, Vermont and New York, have “millionaire’s taxes,” a separate higher rate for very higher earners, according to the Tax Foundation. The enactment of such a tax usually prompts a flurry of wealthy individuals to threaten to leave the state. But while there is anecdotal evidence that some do leave, there is little evidence that such taxes prompt a mass exodus, according to Gardner.

A study by researchers from Stanford and Princeton Universities found that the “millionaire’s tax” in California did not result in either “in-migration or out-migration” and no net tax effect.

When California instituted its higher rate for millionaires this year, a few high-profile people did move out of state. One was Bryan Goldberg, who founded Bleacher Report, a sports website. Goldberg moved to New York (which also has high taxes) to protest the retroactivity of the California tax, which raised taxes on married couples making more than $500,000 and singles making more than $250,000, according to published reports.

But others, such as golf champion Phil Mickelson, threatened to leave but didn’t follow through. In the end, Mickelson bowed to pressure from his fans who accused him of not being sensitive to those living paycheck-to-paycheck.

“The State of California has a higher share of billionaires, not because of the tax system, but because that’s where Silicon Valley is,” Gardner said. “And, really, what fun is it being a billionaire if you can’t live where you want to live?”