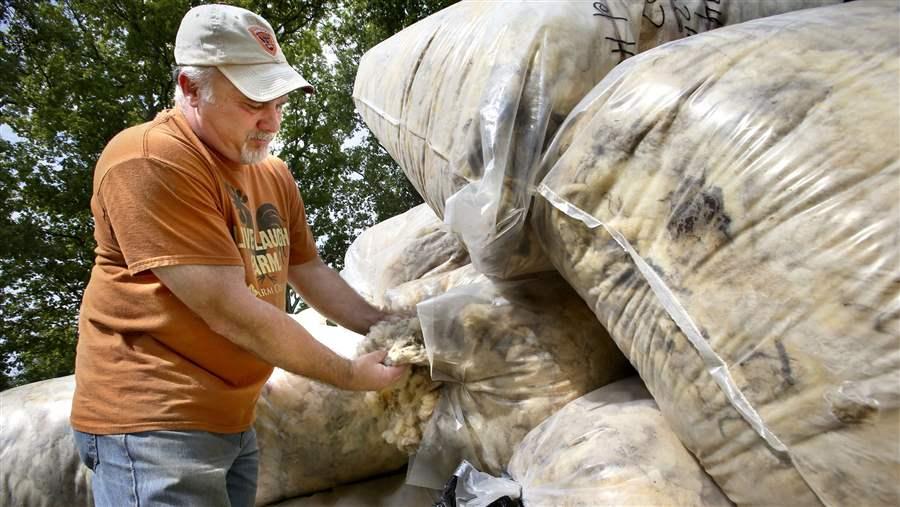 Corey Childs, with the Virginia Cooperative Extension, checks 200-pound bags of wool at the Clarke County Ruritan Fairgrounds in Berryville, Virginia. State cooperative extensions are transforming themselves in an effort to remain relevant. (AP)

For most of the last 15 years, Seth Wilner was the go-to guy for any and all questions about growing plants and animals in Sullivan County, New Hampshire.

“Used to be, someone in my county called up and said, `I have a llama and two goats, can you come out and look at my pasture?’” Wilner said of his former role as an educator with University of New Hampshire Cooperative Extension, his state’s version of a century-old, national effort to spread the latest livestock and agriculture knowledge from universities to farmers.

But after New Hampshire legislators slashed the extension’s budget by 23 percent in 2011, UNH revamped it.

Today, Wilner works out of an office in Sullivan County, but he travels all around the state advising farmers on the business of farming. He and the other field specialists still drive to farms to build relationships, but they also rely on technology like Google Chat and Skype and offer online tutorials and webinars.

Similar transformations are happening across the country as state cooperative extensions work to stay relevant in an era of smaller budgets, fewer farmers, a more diverse population and modern technology.

President Woodrow Wilson signed the law creating the Cooperative Extension Service in 1914. The goal of the unusual county-state-federal partnership was to share land-grant university research on agriculture, home economics and rural energy.  Back then, more than half the U.S. population lived in rural areas, and 30 percent of the workforce farmed.

Today, however, less than 2 percent of Americans farm for a living, and only 17 percent live in rural areas.  The extension service remains active in nearly all of the nation’s 3,000 counties, but the shift has prompted major changes in how it does business.

With fewer full-time employees—the size of the full-time workforce dropped 22 percent from 1980 to 2010, from 17,009 to 13,294 full-time workers—the extension service now relies heavily on nearly 3 million trained volunteers and its web site to disseminate information.

“How we remain relevant and well-connected is by focusing on the problems people have in our states,” said Daryl Buchholz, associate director of extension at Kansas State University. K-State Extension set five “grand challenges,” including raising food to feed the world and growing future leaders through 4-H, extension’s youth development program.

For many states, agriculture remains the backbone of extension. Oregon extension, for example, brings together vineyard managers, winemakers and students for classes in person and online. As a result, wine grapes have catapulted to the 17th most important crop among 220 commodities in the state, according to A. Scott Reed, vice provost at Oregon State University and extension director.

Virginia Cooperative Extension has helped train more than 300 farmers in Virginia, the Carolinas and Kentucky get a head start on expected federal food safety regulations – and, in the meantime, expand their markets.

“I didn’t understand what it took to sell to the big box stores,” says Mike Calhoun of Churchville, Virginia, who spent 39 years in construction before buying three greenhouses three years ago. With help from county extension agent Amber Vallotton, he was able to get certified as having Good Agricultural Practices by the U.S. Department of Agriculture. More retailers are requiring growers to have GAP certification.

Vallotton spent about 25 to 30 hours at Calhoun’s farm without charge, helping him to write a food safety plan with worker sanitation, water quality, harvesting and packaging practices and prepare for an audit of his system. Farms are inspected annually to ensure compliance.

“If it hadn’t been for her, I don’t know if we’d ever have gotten it,” Calhoun said. “She’s been a godsend to most everybody around here.”

In many states, extension is expanding its mission. For example, in southwest Kansas, which has a large immigrant population working in beef feeding and processing plants, extension has started bilingual 4-H clubs for immigrant children and their parents.

The idea came from Steve Irsik, owner of Royal Farms Dairy in Garden City, whose 60 workers are from Central and South America. In 2012, Irsik, a former 4-H member who serves on the state’s 4-H Foundation board, was brainstorming how to combat a decline in 4-H membership when he hit on serving the Latino community. The goal was to create one bilingual club of up to 30 youths and their parents, but soon there were four clubs with 90 youth and hundreds more on the waiting list.

“These people come here because they want to work and get ahead in life,” said Irsik. “If we don’t help them, we’re holding them back.”

Extension services have worked for years on helping individuals fight obesity and improve health, but future efforts will engage the community on improving the environment for health, such as school lunch and restaurant menus, said Rodgers, who chairs extension’s task force on health.

The 4-H Food Smart Families program is helping 2,500 children and their families make good food choices in pilot projects in Delaware, Idaho, Illinois, Nebraska and Washington, thanks to a $2 million grant from ConAgra Foods Foundation.

In another sign of changing times, the bilingual 4-H project was practically cost-free to the counties and Kansas State University. That’s because Irsik, the dairy owner, wrote a check for $30,000. Such personal generosity may be rare, but extension is turning increasingly to foundations and corporations to help pay the bills.

“Extension back in the day was funded about one-third federal, one-third state and one-third county,” said Sonny Ramaswamy, director of the federal National Institute of Food and Agriculture. “That model has frayed quite a bit.”

Federal money for the extension service—about $300 million this year—flows to the states by formula, based on rural and farm population and other factors, and must be matched by the states. Each land-grant university makes up a budget through a mix of state and local funds as well as grants, gifts and fees.

Federal funds account for only about 10 percent of current extension budgets, with 45 percent coming from states (including grants and gifts) and 45 percent from counties and cities, said Jimmy Henning, director of Kentucky Cooperative Extension and chairman of the Extension Committee on Organization and Policy, extension’s national governing board.

In most states, extension relies on the state legislature and county commissions for appropriations. In Kentucky, though, 108 of 120 counties have approved a designated extension tax. Almost all the revenue stays in the counties, Henning said.

“It’s a referendum on whether people value extension,” Henning said. “Without it, we would be half of where we are. We’d be back in the basements of courthouses” instead of in buildings that serve as community hubs, he said.

Many states also go after competitive federal grants and enter into partnerships with nonprofits and corporations. Texas, which lost 18 percent of state extension funding and 115 positions between 2009 and 2011, recently hired its first employee with shared funding from the Scott & White Healthcare company.

“Extension, as it looks to the next 100 years, has to find ways to make up the reductions in state and county funding,” said Douglas Steele, director of Texas A&M AgriLife Extension Service.

As grants become more common, however, some worry about the strings attached to outside funding.

“There’s a greater fear that the search for money may lead to funders who don’t share the mission of extension,” Henning said. “This is a serious issue. Foundations are not by definition as concerned about the community” as extension is.

‘Their Own Little Fiefdom’

Some critics, such as Chuck Caudill Jr. in Beattyville, Kentucky, say local extension money in eastern Kentucky would be better spent on economic development than on buildings.

“For nearly 100 years, the University of Kentucky Extension Service has annually taken hundreds of thousands in local property taxes from every county, set up district and local commissions, built countless buildings and provided programs on youth, family science, community and economic development. Yet Eastern Kentucky remains poverty-ridden, low achieving and very unhealthy,” Caudill wrote in April in an opinion article in the Lexington Herald-Leader.

Counties are allowed to run extension offices “like their own little fiefdom,” with too little oversight from the universities, he said in an interview.

Caudill said he applied for a county extension job, but the position was eliminated.  He is running in the fall election as an independent for Lee County judge-executive, the fiscal officer who administers the extension and other special taxes.

“Extension is a great idea, a fabulous idea,” Caudill said. “But local politics have gotten so they trump the mission.”

In New Hampshire, residents were initially skeptical about extension’s reorganization. But in time, people came around.

“I have not heard any widespread or in-depth complaints,” said Lisa Townson, assistant director of New Hampshire Cooperative Extension. “People say programs are more focused and better quality,” although, she conceded, “It’s a challenge letting people know what we are doing.”