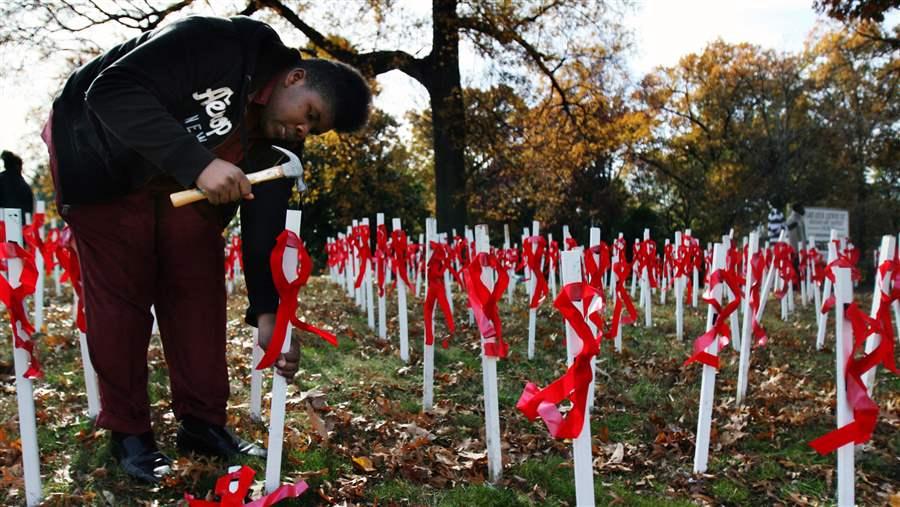 Sterling Williams hammers in markers representing the 3,423 people in Shelby County, Tennessee, who have died from AIDS at Greater Lewis Street Missionary Baptist Church in Memphis. The face of AIDS is increasingly black or Latino, poor, often rural—and Southern. (AP)

New Yorker Deadra Malloy was diagnosed with HIV in 1988, but she remained healthy for so long she wasn’t completely convinced she was positive. When she finally started getting sick in 2006, she decided to embrace her “ancestral roots” and accepted a job down South, where her mother was from.

Malloy didn’t know that the move, first to North Carolina and then to Columbia, South Carolina, would make it much more difficult to manage her disease. New York offers free health care, including HIV drugs, to HIV-positive state residents who are uninsured or underinsured, while assistance is harder to come by in North Carolina and South Carolina. At the time a single mother of two, Malloy couldn’t afford her medication, which cost upwards of $2,500 a month. So she did without it for nearly a year—and ended up in the emergency room with a raging case of pneumonia.

“This wouldn’t have happened in New York,” says Malloy, now 52, who became a passionate activist after her experience, forming P.O.S.I.T.I.V.E. Voices, the first advocacy group for women living with HIV/AIDS in South Carolina. “New York was already way ahead (with services for AIDS patients). There were times I wanted to run back to New York. But I didn’t want to see anybody die (in South Carolina) who didn’t have to.”

The original face of AIDS was that of a middle-class, often white gay man living in New York City or San Francisco. That picture has changed over time as people of color have become disproportionately affected by the epidemic. Today, the face of AIDS is black or Latino, poor, often rural—and Southern.

Southern states now have the highest rates of new HIV diagnoses, the largest percentage of people living with the disease, and the most people dying from it, according to Rainey Campbell, executive director of the Southern AIDS Coalition, a non-profit group serving the 16 Southern states and Washington, D.C. Fifty percent of all new HIV cases are in the South.

The HIV infection rate among African-American and Latina women in the South now rivals that of sub-Saharan Africa. In some Southern states, black women account for more than 80 percent of new HIV diagnoses among women.

States in the South have the least expansive Medicaid programs and the strictest eligibility requirements to qualify for assistance, which prevents people living with HIV/AIDS from getting care, according to a Southern AIDS Coalition report. In the South, Campbell said, people living with HIV have to reach disability status before they qualify for aid. This is significant, because nationally the vast majority of HIV/AIDS patients rely on Medicaid for their health insurance, according to research conducted by the Morehouse College of Medicine.

None of the nine deep Southern states with the highest rates of new HIV/AIDS diagnoses—Alabama, Georgia, Florida, Louisiana, Mississippi, North Carolina, South Carolina, Tennessee, and Texas—has opted to expand Medicaid under the Affordable Care Act. Those states also have the highest fatality rates from HIV in the country, according to the Southern AIDS Coalition.

A recent study conducted by the White House Council of Economic Advisers found that if the nine deep South States expanded Medicaid coverage, more than $65 billion in federal funding would flood those states and an additional four million people would have insurance coverage.

“Jurisdictions throughout the South fail at nearly every level of HIV prevention and care, ignoring proven strategies that could help to address the uncontrolled epidemic and alarming death rate,” Campbell said.

People who don’t have Medicaid or other health care coverage rarely visit primary care doctors and aren’t getting tested for HIV, according to Dr. Michael Saag, a professor and HIV/AIDS researcher with the University of Alabama at Birmingham School of Medicine. “That’s a large group of people who have HIV and don’t know it.” Saag said he recently treated a young man in Montgomery, Alabama, who was blinded from cryptococcal meningitis, a disease typically found among HIV-positive people living in sub-Saharan Africa. The young man had been HIV positive for years but didn’t know it. With earlier treatment, doctors might have preserved his sight.  “That’s a tragedy that shouldn’t happen in our country,” Saag said.

Federal spending policies have added to the problem. Most of the federal money for HIV treatment is distributed through the Ryan White Comprehensive AIDS Resources Emergency (CARE) Act. The original legislation carved out money for heavily impacted large urban areas. Now, however, smaller Southern communities are most in need of help, and they are not eligible for those dollars, according to Saag.

Many of the people living with HIV/AIDS in the South are desperately poor. Many live in rural areas miles upon miles from a clinic—and don’t have access to a car. Others live without running water, or without homes. A study by the Centers for Disease Control and Prevention released last year found that more than 40 percent of those infected have an average household income of less than $10,000.

“It’s all about poverty,” Saag said. “HIV is a disease of poverty. And there are a lot of poor people in Alabama.”

Poverty runs deep throughout the South. According to the Southern Poverty Law Center, of the 20 states with the highest poverty rates, 12 of them are Southern states—and they are becoming poorer.

But it’s not just money, or the lack of it, that accounts for the disproportionate number of people living with, and dying from, HIV/AIDS in the deep South. The escalating HIV rates are the result of a perfect storm of social factors, including poverty, racism, persistent anti-gay attitudes, increasing homelessness and a lack of transportation in rural areas.

In the South, AIDS still has the taint of the plague. Fear of being judged and ostracized keeps some people away from clinics and the care they need. Those who don’t know they’re infected will infect others, creating what the University of Alabama’s Saag calls a “silent epidemic.”

According to Campbell of the Southern AIDS Coalition, Southern states are much more likely to opt for abstinence-only sex education instead of comprehensive HIV/AIDS and sex education in the schools. Many state-sanctioned sex education programs in the South emphasize that sex only should take place within the confines of heterosexual marriage. These states also tend to have more restrictive laws criminalizing HIV exposure and sex work.

The stigma against HIV also plays out in the workplace, despite federal laws prohibiting discrimination against people with AIDS, said Linda Dixon Rigsby, the health law director for the Mississippi Center for Justice. “We still get a lot of cases where the employer doesn’t seem to understand that what they’re doing is illegal,” Rigsby said. “They’re very open about why they fired the person. It’s like the ‘50s race discrimination cases all over again.”

Case in point: In North Carolina, the AIDS Legal Project at the Duke University School of Law took on the case of a young HIV-infected woman who’d been fired twice by two different chicken processing factories. Both companies ended up settling with the woman for an undisclosed amount, according to Carolyn McAllaster, a law professor at Duke University and director of the Southern HIV/AIDS Strategy Initiative.

“Every time we settle a [discrimination] case with a company or institution, we insist on policy change and training,” McAllaster said. “But that feels like one very small step at a time.”

Buckle of the Bible Belt

South Carolina is one of the country’s HIV “Hot Spots,” according to the Centers for Disease Control and Prevention. But bit by bit, the state is making inroads in combatting HIV/AIDS, thanks to a collaboration between AIDS service organizations, state government, legislature and community partners. “This is a state that came into the AIDS fight late,” Rep Neal said. “As a result, it has a strong foothold in South Carolina.”

Until eight years ago, the state legislature allocated $500,000 for assistance for AIDS medication, according to Rep. Neal. There was a long waiting list for people waiting to get medication—one of the longest lists in the country. Some died waiting.

“It was an awful time for us,” says Deadra Malloy. “I started speaking to anyone who listened. People needed to know that there was a face attached to this information [about AIDS].”

The South Carolina HIV/AIDS Coalition, where Malloy worked, formed a task force comprised of people living with the disease, AIDS organizations, hospitals and pharmaceutical companies. The group held breakfasts, luncheons, marches and rallies to publicize the situation. Meanwhile, Neal and like-minded legislators, armed with research, worked on their colleagues at the State House, making the case that increasing funding for HIV/AIDS prevention and treatment made good business sense, because emergency room visits and lost workplace productivity were costing the state an estimated $6 billion annually.

“When they saw those numbers, they recognized it’s not just an issue of morality,” Neal said, “It’s an issue of economics. It made business sense to bring the spread of this disease to heel.”

In 2006, Neal and other legislative advocates convinced the legislature to funnel $1 million to Project F.A.I.T.H, the state’s first faith-based HIV-prevention program. Over a five-year period, the program helped more than 40 churches around the state to educate their congregations about preventing HIV. Despite these gains, AIDS funding in South Carolina has faced deep funding cuts over the past few years, according to a Harvard University report, State Healthcare Access Research Project.

Last year, the state legislature reduced annual funding from $1 million to about $350,000. Neal said he is lobbying hard to get the funding reinstated. In the meantime, private funds have made up the difference, he said.

“We have made progress that no state has made,” said Bambi Gaddist, the executive director of the South Carolina HIV/AIDS Coalition. “Despite the fact that we have not adopted Medicaid expansion, at least people living with HIV in South Carolina have more opportunities than they ever had to get access to treatment.”