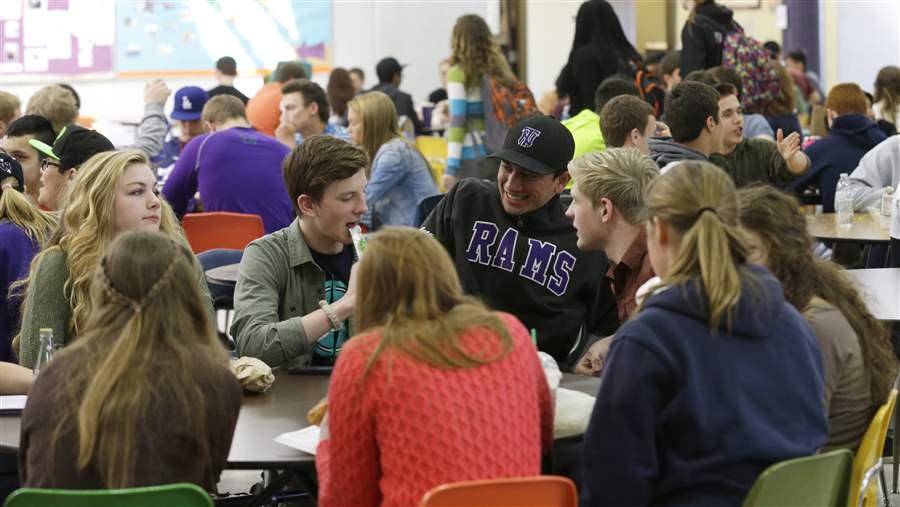 Students at North Thurston High School in Olympia, Washington, one of four states that participated in a pilot project that shared data about student outcomes. States hope that this data will help them in education planning. (AP)

For years, Washington state has collected data on students from prekindergarten through college along with workforce statistics to better understand how students move from school to college and jobs.

One recent study of dropouts, for example, revealed that about 26 percent of them completed a high school equivalency credential within seven years, while 6 percent spent at least some time in a state corrections facility. And the Roadmap Project, which works to improve student achievement in South King County and South Seattle, learned how many of their former participants graduated from high school or attended college.

Until now, however, Washington and other states frequently hit roadblocks when they tried to track their students who moved out of state – whether as youngsters moving with their families or to attend college or take jobs elsewhere.

That’s why Washington – along with Idaho, Oregon and Hawaii – recently participated in a pilot project to share data on student outcomes. It was run by the Western Interstate Commission for Higher Education (WICHE), a regional organization that includes 15 states and the Commonwealth of the Northern Mariana Islands.

The WICHE project analyzed 192,689 students, including 2005 graduates of public high schools and students at public colleges from 2005 to 2011 in the four states. The $1.5 million project was funded by the Bill and Melinda Gates Foundation, which has awarded a second grant of $5 million to expand the project to at least six additional states yet to be determined.

“We’re all looking to educate and retain people in our states so that they can help the economy thrive,” said Peace Bransberger, a senior research analyst at WICHE. “You can only speculate until you have some information about students who have gone beyond your borders after you’ve educated them.”

One goal of the project was to determine whether it was even possible for states to share such data, given the logistical, technical and political hurdles, including protecting student privacy. Another pressing question was whether states would gain any additional insight about their students with the data from the other states.

The initial results were promising.  The multistate approached allowed the participating states to see how many enrolled in graduate school or found jobs in one of the other three states. It also allowed them to determine how much of a local labor market’s needs were being filled by people from other states.

Using only data from their own states to look at outcomes among a subset of 38,800 college graduates, the four states could have reported where about 23,600, or 62 percent, ended up. But by tapping into data from all four states, they were able to account for 2,500 more students, or an additional 7 percentage points.

“There isn’t a lot of knowledge about what happens after a student competes (their education) in terms of labor market or employment because most states are relying on their own data only,” said Brian T. Prescott, director of policy research at WICHE and the leader of the pilot project.

Some states learned more than others. Oregon, which knew the outcomes of 65 percent of its college students using only its own data, learned about outcomes for students representing an additional 7 percentage points; Hawaii, which gained the most new data through the exchange, previously knew outcomes of 54 percent of students but learned about students representing an additional 14 percentage points.

Kevin Hollenbeck, vice president at the W.E. Upjohn Institute for Employment Research, a nonprofit research organization studying unemployment, said the study helps “fill in the picture of what fields people are pursuing and what fields are attracting folks from out of state.”

Ultimately, the kind of information shared in the pilot project could help states shape education policy, said Paige Kowalski, director of state policy and advocacy for the Data Quality Campaign, which advocates for the use of data to improve education. Almost half of the students from Maryland who attend college leave the state to do so, she said, for example. But without data from other states, policymakers know little about how those students are doing – whether they obtain degrees or find jobs.

And in North Carolina, for example, about one quarter of new teachers have been trained in other states, which means it’s difficult for those states to evaluate how effective their teacher-training programs are.

“It’s very difficult to create good feedback loops when you can’t follow someone over that state line,” Kowalski said.

In Hawaii, as in other states, officials hope the kind of student outcome data they are collecting will be helpful not only to policymakers but also students and parents trying to determine where to go to college or what to study.

Pearl Iboshi, director of the Institutional Research & Analysis Office at the University of Hawaii System, said the state is working on reports showing the median wages for different programs at different levels of education, such as associate’s degrees and bachelor’s degrees.

Idaho is planning to use the shared data to better inform policymakers about workforce development and education planning, said Andy Mehl, who manages the Statewide Longitudinal Data System there.

“Without information, a lot of people start assuming that they know what the right answer is, that they know the best thing for Idaho students is to keep them all in the state,” Mehl said. “This kind of data allows you to show them what actually happens or what policy is driving students in a certain direction. It helps them be better informed about the decisions and the repercussions of what they’re doing.”

Mehl said lawmakers could craft scholarships that would encourage students to stay in state, for example, or require them to return to the state after studying elsewhere.