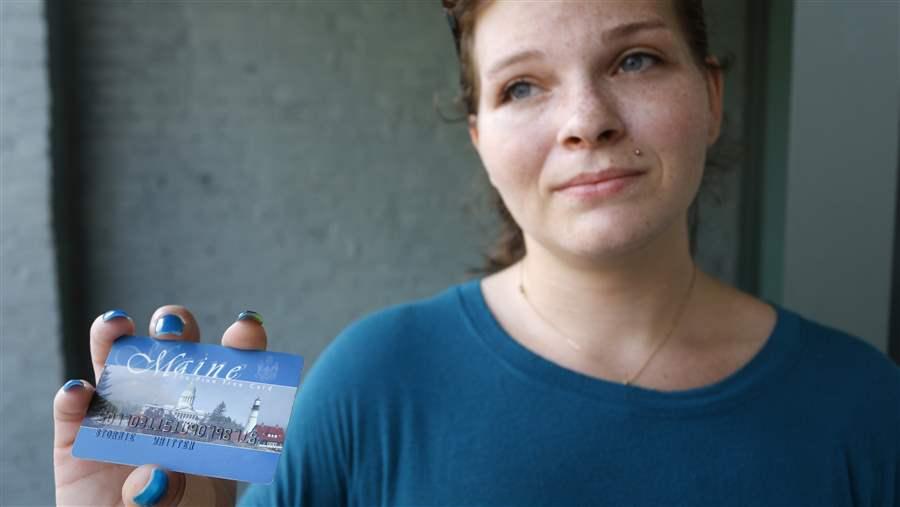 Stormie Whitten shows the card that allows her to shop for groceries under Maine’s food stamp program. The Great Recession and sluggish recovery increased the number of people receiving food stamps, but most states reduced error rates even as the rolls expanded. (Getty Images)

Despite a Great Recession-fueled expansion in food stamp rolls, the percentage of Americans mistakenly receiving too much or too little under the program is at an all-time low.

In 37 states, error rates fell between fiscal year 2008 (the recession officially began in December 2007) through fiscal year 2013, according to a Stateline analysis of U.S. Department of Agriculture (USDA) data for the Supplemental Nutrition Assistance Program (SNAP), commonly known as food stamps.

During the downturn, many Republican lawmakers argued that billions could be saved by cutting waste, fraud and abuse in the program. A GOP-backed bill in Congress last year promised $30 billion in such savings, but the declining error rates cast doubt on that claim.

“The fact is that there are so many different levels on which the program is performing very strongly right now,” said Dottie Rosenbaum of the left-leaning Center on Budget and Policy Priorities. “It’s performing the way it was designed to.”

During the recession, enrollment and spending in food stamps skyrocketed nationwide. In 2008, the monthly average number of Americans enrolled was 28.2 million, and the cost of the program that year totaled $37 billion. By 2013, monthly average enrollment topped 47.6 million, and total spending for the year neared $80 billion. In the depths of the recession, a quarter of all residents in some states were enrolled in the program.

For error rates in each state over time, see Stateline’s data visualization.

The overall payment error rate includes both overpayments to those enrolled in the program, and underpayments. The Center for Budget and Policy Priorities estimates that accounting for 2013’s underpayments (which in theory save the government money), the mistake-related net losses to governments were just 2 percent of the amount spent on benefits. The USDA estimates that compared to improper payments in the year 2000, mistake-related net losses declined by $4.34 billion in 2013.

Mix of Federal and State Steps

Error rates for the program have been falling for more than a decade, thanks to a mix of state and federal steps to reduce payment errors. In 2002, the national error rate topped 8 percent. In fiscal year 2013, the rate was just 3.2 percent.

Those steps include streamlining paperwork and simplifying the way potential recipients are screened for eligibility. Washington also levied penalties on states with persistently high error rates. And states have been allowed to crosscheck applications with asset tests for other safety-net programs, cutting the administrative burden and the potential for errors.

The federal government also has awarded grants to the best-performing states. That program was on the chopping block during the last debate in Congress over the farm bill, which funds the food stamp program. House Republicans wanted to end the grants, which were expected to cost $480 million over the next decade, as part of their broader effort to reduce spending on food stamps. The GOP bill promising $30 billion in savings would have eliminated those grants as well. Supporters argued that states shouldn’t have to be rewarded for cutting down on errors.

Senate Democrats refused, however, and the grants ultimately survived. In 2013, $30 million in awards were sent to some states, including more than $7 million to Florida and more than $6 million to Texas. Missouri received $1.6 million for reducing its error rate from its 2012 rate of 7.18 percent to 1.62 percent in 2013.

The next round of performance grants will be announced at the end of this month.

There’s no clear explanation for why some states have been so successful in reducing error rates while others have not. Vermont, for example, has an error rate of more than 9.6 percent, nearly double its 2008 rate of 5.5 percent. Enrollment there topped 100,000 in 2013, a 33 percent increase over its pre-recession level.

Sean Brown, deputy commissioner at Vermont’s Department for Children and Families, blamed the state’s budget squeeze during the recession and a huge expansion in enrollment. But, he said, the state has made progress: For the current fiscal year, the state is on track to see an error rate in the mid-3 percent range.

Enrollment in Rhode Island was close to 180,000 during the last fiscal year, a 123 percent increase compared to 2008. For some staffers, caseloads quadrupled because of ballooning rolls and a shrinking workforce, according to the state’s Department of Human Services. In response, the state has changed the way staffers handle the administrative side of the program, and it has made other personnel and technical changes to address the elevated error rate.

The second-lowest error rate was in Florida, where the monthly average food stamp enrollment jumped more than 1.5 million during the recession. The state's 0.81 percent rate was nearly identical to its 2008 rate. In 2003, nearly 8 percent of Florida’s food stamp payments were made in error.

Praise from Both Sides

The reduction in errors has prompted praise from both food stamp defenders and critics of the program.

“A careful look at the facts disproves critics’ claim that SNAP is riddled with waste, showing instead that USDA and states have achieved impressive results in recent years, racking up the lowest error rates on record,” CBPP said in a report on error rates. “This success is no accident.”

Added Rachel Sheffield of the conservative Heritage Foundation: “It’s definitely a good thing that overall mispayments and fraud have declined.”

Yet the good news won’t preclude further debate over the future of the program, which conservatives continue to view as unsustainable, even as the recession-driven spike of recent years has started to recede.

“The fraud always gets a lot of attention, and of course it is an issue, you want the program to have integrity,” Sheffield said. “The question now is how do we reform this program so it’s on a more prudent course?”

For some in Congress and the states, the answer to that question includes boosting work requirements — which some states have done — and closing a “loophole” that lets some recipients in certain states receive extra benefits, the so-called “Heat and Eat” provision.  Congress did eliminate that tactic, but states have found ways to continue it anyway.

This story was updated to clarify that changes in food stamp error rates are measured in percentage points.