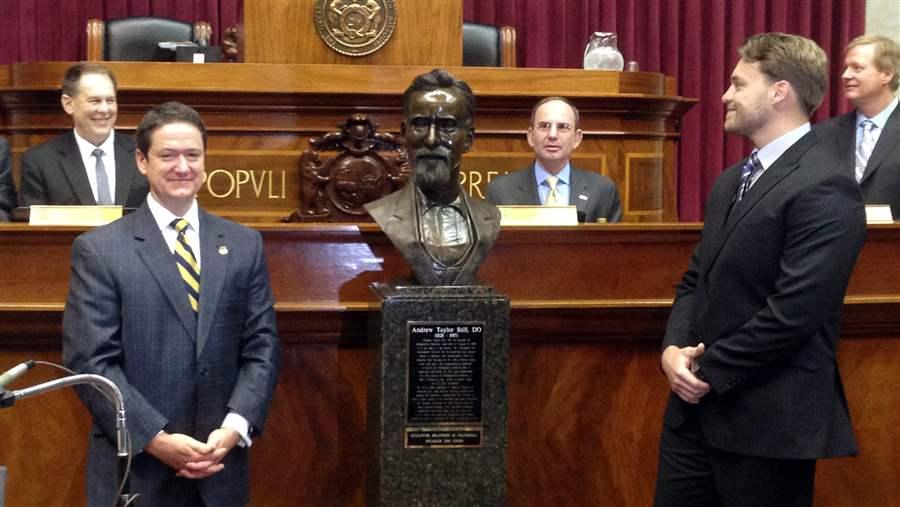 Missouri House Speaker Tim Jones and sculptor Brandon Crandall unveil a bronze bust in April of physician Andrew Taylor Still, a Missourian who founded osteopathic medicine in the 19th century. The number of licensed osteopathic physicians, who practice patient-centered care that meshes with the Affordable Care Act, has increased five-fold since 1970. (AP)

Recent reforms in American health care weren’t designed with osteopathic medicine in mind. It only seems that way.

The emphasis on “patient-centered care”—the idea that physicians should follow the wishes and preferences of patients, and treat patients holistically, rather than just treating their symptoms—have been the hallmarks of osteopathic medicine since its founding in the 19th century by a frontier doctor.

Those ideas are ingrained in the Affordable Care Act, which uses financial incentives to promote certain kinds of patient-centered medical services. Meanwhile, the new health care law is expected to exacerbate a shortage of primary care doctors by extending health coverage to millions more Americans.

Interest in osteopathic medicine was surging even before the ACA, but many believe the new law will accelerate the trend.

In 1970, there were 13,022 osteopathic practitioners in the U.S., and most were clustered in the middle of the country. Today, there are more than 82,000 doctors of osteopathic medicine (D.O.s), according to a report of the American Osteopathic Association (AOA). By contrast, the Journal of Medical Education estimates there are about 790,000 M.D.s in the U.S.

Osteopathic practitioners say they haven’t changed. Instead, American health care is coming to appreciate what has always been central to osteopathic medicine.

“The fact that there is more emphasis on patient-centered care and on the whole person is in keeping with what has always been true of osteopathic medicine,” said Robert S. Juhasz, head of the AOA and president of Cleveland Clinic’s South Pointe Hospital. 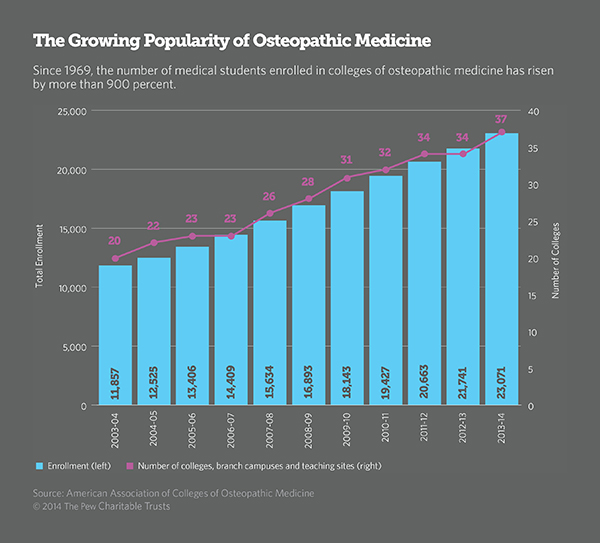 The founder of osteopathic medicine, Andrew Taylor Still, was a Kansas abolitionist and friend of famed abolitionist John Brown. He believed that traditional medicine as then practiced, featuring such curatives as castor oil, arsenic, leeches, and opium, often did more harm than good.

Still had great faith in the body’s ability to heal itself and the capacity of doctors to diagnosis and treat with their hands, tenets that remain strong in osteopathic medicine today. As it developed over the years, with its attention to diet, lifestyle, and mental wellness, its emphasis on preventive health and affinity for hands-on diagnoses and healing, osteopathic medicine anticipated approaches to health care that are now fully accepted in American medicine.

Most Americans are probably unaware that two tracks of medical training exist, both of them producing fully licensed physicians. Although osteopathic medical graduates can and do go on to all the medical specialties when they become residents, osteopathic medical colleges discourage early specialization and emphasize general medicine.

In osteopathic medicine’s first 60 years, osteopathic doctors often found themselves unwanted in many residency programs and hospitals, and they were not allowed to practice in the military. But those limitations began to disappear in the 1950s and were virtually gone by the end of the 1970s.

Any enmity between the two types of medicine were put to a symbolic end last spring when the AOA, AACOM and the Accreditation Council for Graduate Medical Education (ACGME) jointly announced a plan to develop a single accreditation system for all graduate medical education.

Colleges of osteopathic medicine—there are now 42, including branch campuses — are seldom attached to teaching hospitals. Most send their students to community medical centers for training. The schools tend to be located in areas that are medically underserved, and they encourage their graduates to work in such areas.

In the past, that has meant building osteopathic medical programs in rural areas, like Appalachia and the Great Plains. But recently, they have also located in underserved urban and suburban areas as well.

“You had an economically depressed, medically underserved area here in Harlem surrounded by a larger population area that had no shortage of doctors,” said Robert Goldberg, dean of Touro’s Harlem campus.

Goldberg said Touro admission officers look for students who have shown genuine commitment to serving the disadvantaged and appear inclined to continue to do so as physicians.

Training students to communicate effectively with patients has always been central to education in osteopathic medicine, Goldberg said. A study released last year by the Foundation for Osteopathic Research and Continuous Education found that students in traditional medical programs demonstrated a drop-off in empathy for patients after their second year of medical training, a decline not identified among students of osteopathic medicine.

Goldberg pointed out that fewer than 10 percent of the graduates from the medical school at nearby Columbia University end up in primary care, and well over 50 percent of his graduates do.

Already, nearly 20 percent of Americans live in areas with too few primary care doctors, with the shortages particularly pronounced in rural areas, according to the Health Resources and Services Administration. The Annals of Family Medicine predicted that the U.S. will face a shortage of 52,000 primary care doctors by the year 2025.

The emphasis on empathy is what attracted Carisa Champion-Lippmann to osteopathic medicine. She attends the College of Osteopathic Medicine at Nova Southeastern University in Davie, Florida, where she is also in degree programs for law and public health.

“I wanted something different than what I saw in other medical schools,” Champion-Lippmann said. “I wanted a program that was about really respecting where patients were coming from and also looked at all the things that affected a person’s health – from the physical to the mental to the spiritual. Finally, I found out about osteopathic medicine.”

Clif Knight, an M.D., and vice president for education at the American Academy of Family Physicians, said that while some allopathic medical schools are strong in family medicine, others are not, perhaps to the point of not even having departments of family medicine.

“Osteopathic medicine has a much more consistent focus on primary care,” he said. Osteopathic education, he added, also gives students early exposure to patients to emphasize the importance of forging strong relationships with them. Many allopathic schools are now adopting that approach, said Knight.

That happened between Virginia Tech and the Edward Via Virginia College of Osteopathic Medicine. It was so successful that Auburn University, a public university in Alabama, entered into a similar agreement with Edward Via Virginia to start another school there. The first class will arrive next fall. Edward Via Virginia also has a campus in South Carolina with a looser affiliation with three colleges in the area.

Edward Via Virginia’s current provost and founding dean, Dixie Tooke-Rawlins, is largely responsible for that growth. She says she has turned aside proposals from other universities interested in similar collaborations, only because there’s only so much expansion Edward Via Virginia can do.

But she is not surprised by the contacts she has received given the national emphasis these days on patient-centered care. “I’m 60 years old,” she said, “and when I first heard that term, I thought, ‘Well, what else is there?’”