Protesters in Phoenix the day after Republican Arizona Gov. Jan Brewer issued an executive order denying driver’s licenses to young unauthorized immigrants, even those who qualify for Deferred Action for Childhood Arrivals (DACA). Achieving DACA status has a different meaning from state to state. (AP)

Phoenix resident Franko Milan is happy to have qualified for Deferred Action for Childhood Arrivals (DACA), the federal program that allows him to work in the U.S. for a two-year renewable period without fear of being deported, even though his parents brought him to this country illegally when he was a baby.

Launched by the Obama administration in 2012, DACA allows Milan and other young people with similar stories to remain in the U.S. temporarily as long as they meet age, education and residency requirements. They can work, and are allowed to receive Social Security numbers.

But in Arizona, DACA can’t get Milan a driver’s license or in-state tuition at state colleges and universities. So he dropped out of college and works as a real estate agent, still fearing the police when he has to drive.

“Most of the time it’s fine,” said Milan, who was in the process of being deported when DACA began in 2012, having been picked up for a traffic violation on his motorcycle. “When you see an officer pull up in back of you, it’s definitely nerve-wracking. Are you going to get a ticket? Is he going to tow the car?”

Life for DACA participants varies dramatically depending on where they live. In addition to denying driver’s licenses and in-state tuition to DACA recipients (and to all other unauthorized immigrants), Arizona makes it difficult for immigrants whose parents brought them to the U.S. illegally as children to take advantage of GED diploma programs that would help them qualify for DACA.

In contrast, states such as Illinois, California and Maryland have helped young immigrants to qualify for DACA and to make life easier for them. Illinois, for example, has started a fund to help DACA students pay for medical school. DACA students who get loans from the fund must work in underserved areas after they graduate.

“In Illinois we’re really doing what we can until the federal government takes action,” said Amalia Rioja, Democratic Gov. Pat Quinn’s deputy chief of staff. “We and other states try to do it as best we can, kind of a piecemeal approach, filling in the gaps where we have the authority to do that.” 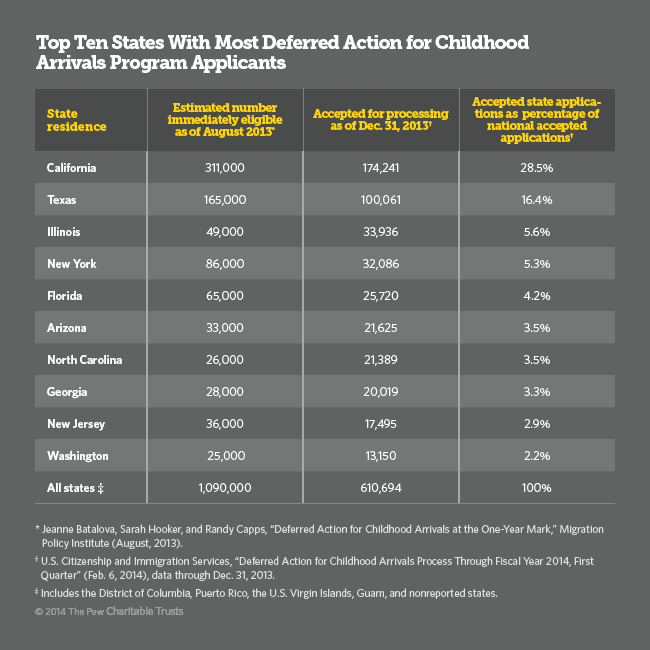 More than 638,000 young people have applied for DACA since it began in 2012, a rate of about 1,770 per day, according to a June report by the U.S. Citizenship and Immigration Services. About 522,000 of them have been approved. DACA participants have to apply for renewal every two years.

About three-fourths of the DACA participants are from Mexico. Milan’s Mexican parents drove him into the country on a tourist visa and stayed illegally. Large numbers also come from El Salvador, Honduras, Guatemala, Peru, South Korea, Brazil, Colombia, Ecuador and the Philippines.

More than half are in California and Texas, but tens of thousands also are in Illinois, New York, Florida, Arizona, North Carolina, Georgia, New Jersey, Colorado and Washington. Least affected are West Virginia, Alaska, North Dakota, Montana and Maine, all with less than 100 DACA approvals.

Sergio Garcia, a Mexican-born attorney, said he has participated in efforts that have helped 10,000 youths achieve DACA status in Florida, Washington, and California. But he can’t take advantage of the program himself.

“I’m very happy with the way it’s changed their lives, but I don’t have that status.  I guess it’s bittersweet,” said Garcia, whose Mexican parents brought him to the U.S. illegally in 1977, when he was a baby. At 37, he’s too old to qualify for the program. Without legal work status, Garcia is ineligible to work at a law firm, though a California law allows him to practice on his own.

To qualify for DACA, applicants must be childhood arrivals (younger than 16) who have lived in the U.S. since 2007 and were younger than 31 years old on June 15, 2012. Only current students, high school graduates and veterans are eligible.  And applicants who have committed a serious crime, have more than two misdemeanor convictions or are deemed to be a threat to national security are automatically disqualified.

Nationwide, about half of those eligible have applied, according to a study released this month by the Migration Policy Institute. Application rates vary significantly from state to state, from a high of 66 percent in Arizona, the state with the most hostile policies toward DACA recipients, to 37 percent in Massachusetts and New Jersey. Immigrant-friendly Maryland is near the bottom at 41 percent.

“States with more restrictive policies…as well as those that have higher levels of immigration enforcement, may have higher DACA applications rates because the burdens and risks or unauthorized status are especially high in those states,” the study concluded.

A recent report by the Pew Charitable Trusts (which also funds Stateline) highlighted several examples of states and localities that have embraced the program. In addition to setting up the fund for medical students, Illinois officials representing several state agencies hosted public meetings to disseminate information on DACA and to share best practices. Chicago has conducted workshops to help applicants fill out the necessary forms, and the city has trained public school counselors to provide DACA guidance to students.

Meanwhile in Dallas, public libraries are helping young people use public computers to complete online DACA applications. Several states are trying to protect noncitizens from scams promising legal status for a fee, a practice that becomes popular whenever the federal government announces a legalization or immigration relief program. And 20 states allow DACA students to pay in-state tuition rates at public colleges and universities.

States such as Arizona and Nebraska are on the other end of the spectrum. In July, the 9th U.S. Circuit Court of Appeals ruled in favor of DACA recipients who sued Arizona to force the state to give them driver’s licenses. The court issued an injunction blocking the state from denying the licenses, but because the state has asked for a rehearing, the injunction order is on hold.   In February, a federal court dismissed a similar lawsuit by immigrants’ rights groups in Nebraska, but a new lawsuit is pending.

Angelica Hernandez immigrated to the U.S. 15 years ago with her mother and sister and grew up in Phoenix. In 2011 she graduated from Arizona State University, and earlier this year she earned a master’s degree in engineering from Stanford University. A DACA recipient, she was able to return to Arizona to work — but she could not get a driver’s license. She continues to use the California driver’s license she got in grad school.

Adonia Simpson, a Baltimore attorney who works with immigrants, said the driver’s license issue looms large for many unauthorized immigrants who arrived as children. Like Milan, many found themselves on the brink of deportation after a routine traffic stop. “This was the number one thing that was bringing them to the attention of immigration authorities, being stopped and not having a license, so this make things much more secure,” Simpson said.

The recent flood of Central American children crossing the U.S.-Mexico border alone has focused new attention on DACA — much of it negative. The children do not qualify for DACA, which requires U.S. residence since 2007. Nevertheless, Republican U.S. Sen. Ted Cruz of Texas and other Republicans have blamed the border crisis on DACA, claiming it creates the expectation that children arriving illegally will get legal status.

But Simpson said she sees no evidence that DACA is leading children to the border. Maryland is one of the few states where most immigrants are Central American rather than Mexican.

“One of the myths and fallacies out there is that DACA is a push factor leading kids to the United States,” she said. “There’s been a lot of investigation, and the real push factor is extreme violence in their home countries. I’ve interviewed a lot of families and never once has anyone asked about DACA.”

There is some evidence, however, that the Central American immigrant crisis has swayed public opinion on the broader issue of immigration. In July, 68 percent of Americans supported some path for legalization for unauthorized immigrants, down from 73 percent in February, according to a poll by the Pew Research Center. Among tea party Republicans, support declined to 41 percent from 56 percent.

But DACA also has emboldened people on the other side of the issue. A national network of “Dreamers” – immigrants who arrived as children, whether or not they qualify for DACA – has been vocal in its demands for a halt to deportations and a strengthening of immigrants’ rights.

Dreamers demonstrated in Arizona this week and disrupted a book signing by Wisconsin Republican Rep. Paul Ryan after Ryan voted for a bill that would have defunded DACA. Also this week, an affiliated Florida group held a protest in South Carolina against Republican U.S. Sen. Marco Rubio of Florida, who has blamed DACA for the recent influx of Central American children.

“It really was Dreamers who were empowered enough in the beginning to come out as undocumented and unafraid,” said Mario Carrillo of United We Dream, an immigrant youth organization that organized the demonstrations. “They're the ones who've been here for many years and have studied here and who really feel like a part of the fabric of the country, so they do feel more comfortable being outspoken,” Carrillo said.