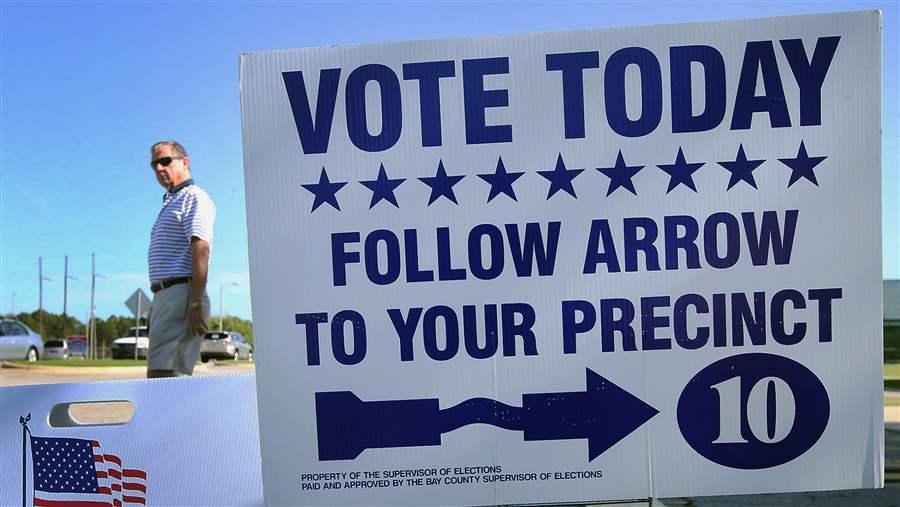 A primary election voter leaves a Panama City Beach, Florida, precinct earlier this month. In a year in which more money is expected to flow into state races, Florida’s gubernatorial campaign could be the most expensive in the country. (AP)

Money is pouring into statehouse elections this year at a potentially record-breaking rate, as the stakes for political control in the 50 capitals continue to rise.

That record amount doesn’t include another $1 billion raised for campaigns on state ballot questions. Nor does it reflect uncounted millions spent by some outside organizations seeking to influence the outcome of elections.

The eye-popping total reflects growing recognition of the powerful role states play in regulating and taxing industries, from energy to insurance to gambling. It also reflects the fact that a wide array of hot-button issues, such as educational standards, the Affordable Care Act, immigration, gay rights and gun control, are being shaped and implemented in the states because of political gridlock in Washington. 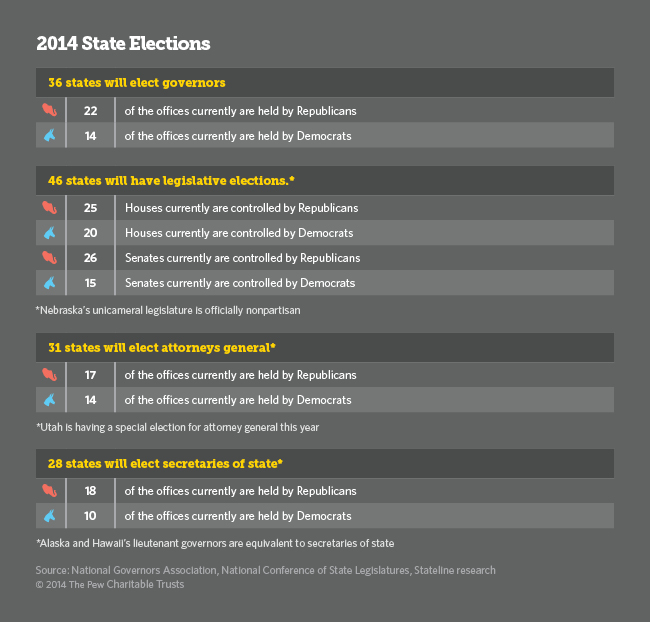 States increasingly have exercised their traditional powers to be involved in nearly every social and economic issue, and inaction by Congress has made it the states’ business to carry out national policies, said Thad Kousser, professor of political science at the University of California San Diego.

“The stakes are higher and ever higher with the issues in statehouses,” said Kousser. “Insurance, environmental, the Affordable Care Act – statehouses have a huge amount of power over each of these. The education wars – that’s also a state decision.”

Paul Brace, professor of political science at Rice University, said there is “more power and influence on policy at the state level than 30 years ago.” Campaign contributions give donors access to lawmakers, he said, and access carries the ability to possibly influence decisions.

Many factors are driving the increasing flow of political dollars into state elections, not the least of which is the U.S. Supreme Court’s Citizens United ruling in 2010.

The decision opened the spigot on unlimited independent spending by corporations and unions. It’s led to the creation of super PACs and spurred the growth of 501(c)(4) “social welfare” groups that can accept unlimited amounts to spend independently of a candidate’s campaign.

But even before the Citizens United decision, state-level election campaigns were attracting big money.

About $2 billion was raised by candidates, legislative caucuses and state political parties in the 2007-2008 election cycle, according to figures compiled by the Money in State Politics group. Another $814 million was raised for ballot questions in that cycle.

The number of governorships up this election cycle by itself could make for another record amount of political money, said Bender of Money in State Politics.

Thirty-six states elect governors this year. Fifteen states did in 2011 and 2012, when candidates for the office raised $257 million. That’s an average cost of $16 million per race, Bender’s group calculated. And that’s adding costs of a special election in West Virginia and a gubernatorial recall election in Wisconsin.

For comparison, Florida’s gubernatorial election this year, which may be the most expensive contest, could tally $150 million by itself.

In addition to what candidates are raising, super PACs and other independent groups are growing in number and apparently have more money this year to spend in gubernatorial and other state elections, Bender said.

The prospect of greater independent expenditure is sending chills through many statehouses and helping to spur an arms race for money.

It prompted the Connecticut legislature to last year change its state campaign finance laws, which were among the most stringent in the nation and provided for public campaign financing.

Lawmakers removed a cap on how much political parties can spend on candidates who participate in public campaign financing and raised the limits on what donors can contribute to the parties as a way to offset what outside groups spend to influence an election.

Eighty percent of the candidates running there this year are opting into the public finance system, said Cheri Quickmire, executive director of Common Cause Connecticut. But many remain fearful of advertising by outside groups that could sway the outcome of an election.

“Everyone is participating, yet everyone is panic-stricken that outside expenditure groups are going to come in and attack them,” she said.

Outside groups already are in Kentucky in a bid to help Republicans take control of both legislative chambers by winning the Democratic-controlled House this November. Among them: Americans for Prosperity, a conservative group backed by billionaire businessmen Charles and David Koch, on the GOP side.  Working America, an affiliate of the AFL-CIO, is trying to help Democrats.

Also involved in Kentucky and other states are national party PACs.

The national Republican State Leadership Committee will spend between $35 million and $40 million on legislative and other down-ticket races in all 50 states this year, said Matt Walter, the group’s president.

Sargeant this month unveiled a multi-year “Advantage 2020” plan aimed at winning control of the nation’s legislative chambers during the next three election cycles. At present, Republicans control 28 legislatures to the Democrats’ 17. Four are split and Nebraska’s unicameral legislature is nonpartisan. The year 2020 is critical, because after that year’s census, state lawmakers in most states will be charged with drawing districts for state legislative and congressional seats.

Not long ago, races for attorney general and secretary of state were low-cost, low-key affairs. That’s changed, too, as the financial and political stakes have risen.

Attorneys general have broad jurisdiction on anti-trust, fraud and charities and with it, law-enforcement authority in most states and wide authority to sue, said James Tierney, director of the National State Attorneys General Program at Columbia Law School.

To explain why secretaries of state races attract big money, Kousser said, one need only look at the 2000 presidential election, when Florida’s secretary of state, Katherine Harris, certified Republican George W. Bush the winner of that state’s deciding electoral votes.

Early voting, qualifications to register to vote, polling locations and hours and certification of results can determine the outcome of elections, Kousser said, and decisions or the administration of voting laws rest with the secretaries of state in most states.

That’s incentive for the political parties to finance their candidates, he said, and drive up the cost of campaigns.

Because they run statewide for office, secretaries of state and attorneys general, like lieutenant governors, also become enticing candidates for higher office in the future, political scientist Brace said.

“Once you win statewide, you’re eligible to win higher office,” he said. “It’s a stepping stone to governor or (U.S.) senator.”

Does the ever-increasing level of money going into statehouse races buy anything more than a greater chance of victory or access to officials once they’re elected?

Bender, who tracks the dollars, isn’t sure how much influence campaign money makes in shaping laws and policy, despite the high financial stakes often involved.

“The money does help people get elected,” he said. “We know that much. But it’s difficult to say beyond that. It’s the old question: Does the money follow the ideology or do the ideology and policy shifts follow the money? I don’t know.”