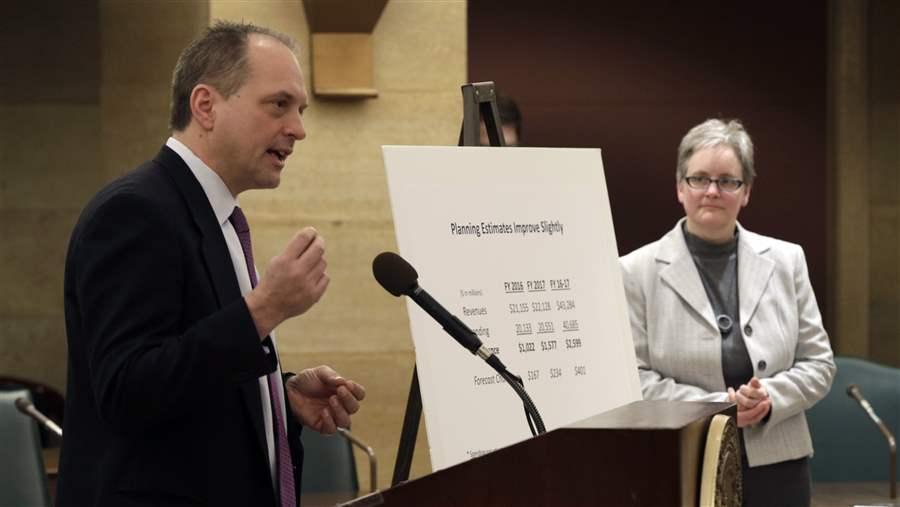 “Performance-based budgeting,” buzzwords for states making spending decisions based on specific benchmarks, gained traction in the 1990s, then fell out of favor during the budget-cutting era of the Great Recession. Now the strategy is making a comeback — with mixed results so far.

The idea is to use specific measures of past performance to assess whether a particular budget item, such as a child nutrition program or a new road, is worth the expense. Traditionally, spending decisions are dictated by population growth or predictions of what construction projects will be necessary in a coming budget year.

Under performance-based budgeting, lawmakers also take into account how well the program performed previously — how many clients were served for how much money, for example — to decide how much more or less to allocate for the program in the coming year.

According to the National Conference of State Legislatures (NCSL), performance-based budgeting relies on accountability, “not merely compliance with the law and previous funding decisions.”  A performance-based budget, the NCSL says, sets real measures for determining success, and looks for similarities between agencies seeking similar outcomes. It also rewards achievement and can impose sanctions for poor performance.

The approach makes perfect sense — in theory. In reality, its success relies heavily on how vigorously state leaders push the idea and how receptive state agencies are to a process that often makes them work harder to produce real measures. And it works better for some areas of government than others, particularly those with easily measured milestones.

In a 2013 survey of members of the National Association of State Budget Officers (NASBO), 44 percent of respondents said their state uses the term “performance budgeting” to describe its budgeting approach, sometimes along with another method, such as the traditional line-item process which assigns a dollar amount to very narrow functions.

But NASBO concluded in its 2014 paper which incorporated the survey that “despite widespread interest and growing use of performance budgeting practices, the process of actually tying performance information to funding decisions in an effective, meaningful and practical manner continues to be a major challenge for all levels of government.”

The problem, according to John Mercer, a private consultant with Strategisys who helps states and agencies chart a path toward performance-based budgeting and lays out implementation procedures, is that in many cases there is no follow-through on grand plans laid out by politicians.

“The concept has been around a long time, but there has been lot of struggling with it, it’s turned into a paperwork exercise and it became something the civil servants were dispirited by,” he said. “All the work they were going through that they were told they must do, wasn’t really affecting budget decisions.”

In Minnesota, state law requires agencies to report performance based on metrics such as number of roads repaired, bridges built or recorded highway fatalities. But even there, lawmakers have not been consistent in their use of the information to make spending decisions.

Though imperfect, the process does ingrain performance goals into every level of budgeting, from the governor on down, according to Michelle Weber, the state’s budget operations director. Training agencies to gather and use performance information is “not just making it about the budget, but making it about the overall management of state government and services,” Weber said.  An example is the state Department of Transportation, which puts performance information on its public website.

Seventeen states are working with the “Results First Initiative,” a project of the Pew Charitable Trusts (which also funds Stateline) and the MacArthur Foundation, to apply a customized, innovative cost-benefit approach to policy and budget choices.

Eleven states — Connecticut, Iowa, Idaho, Illinois, Kansas, Massachusetts, Mississippi, New Mexico, New York, Oregon and Vermont — have completed implementation of the model and have shifted, cut or allocated a total of $80 million using the new measures, with anticipated returns of as much as $38 in net benefits to taxpayers for every dollar invested by the state in the targeted programs. The other states are Colorado, Nevada, Rhode Island, West Virginia and Texas.

Texas has been working with performance-based budgeting models for 20 years. Mike Morrissey, deputy chief of staff and senior adviser to Republican Gov. Rick Perry, said since the early 1990s, state agencies have incorporated performance measures into their budgets. And the legislature and governor take performance into account when allocating funds.

He says the system works better for some agencies than for others. For example, a licensing agency can easily determine the cost of administering a periodic licensing exam, he said, but an agency that tries to influence behavioral outcomes in substance abuse can’t put the same number on each client because some people need more time and services than others.

Morrissey said the evidence points toward more efficiency and accountability with this system. “We know more about what we get,” he said, but he added those who thought the system “could be reduced to a simple unit cost … were optimistic and uninformed.”

“The performance part of this has been helpful, but it is not going to be the sole and determining factor in budget decisions,” he said.  “I don’t know that it’s fair to say we absolutely spend a dollar less someplace.”

Wayne Roberts, a former Texas budget director who was present at the creation of the system, is more critical. Nearly all the performance measures have done, he said, is add “verbiage” to the budget and balloon the budget document from 697 pages in 1991 to 947 pages (and a smaller type size) decades later.

That ballooned budget is less clear than the old line-item way of budgeting, said Roberts, who is now CEO of the Cancer Prevention & Research Institute of Texas. And he said the “rewards and penalties” system based on performance never worked, which is why budget savings are elusive.

“The penalties could never be imposed because agencies are created to serve a clientele. Who are you going to hurt? You are going to hurt the recipients of state funds,” he said. “If you want to punish the university president and take away money, it’s the students you are going to hurt.”

John Roberts , Michigan’s budget director (no relation to Wayne Roberts), said Republican Gov. Rick Snyder’s support for performance-based budgeting has been critical to its success. “When you have a governor of this state who is interested, that keeps the cabinet interested because they all work for him.”

But Roberts is not naïve. He knows that when Snyder, who is running for re-election, leaves office whether this year or in four years “things are going to change.”

“We are hoping to get the departments to say, ‘This is interesting.’ If everyone looks at the data and says, ‘This is boring,’ then we’re running a data drill that’s not worth anything (and won’t carry over),” Roberts said. “But if the legislature looks at this and says ‘Oh, you paid this much more and got this much more,’ then we’re in business.”

Mississippi has a pilot program for performance budgeting starting with the Department of Corrections that begins with the goal of reducing recidivism, according to Mississippi House Speaker Philip Gunn, a Republican.

“When someone commits a crime, you arrest them and there are costs associated with that. There are incarceration costs, prosecution costs, and victim costs,” he said. “If you can prevent that (person) from going back to jail again, you are saving those costs.”

Gunn told Stateline that Mississippi had nine programs designed to reduce the number of offenders returning to prison after release. A study showed eight of them were doing a good job, but the ninth had less success.

One educational program that showed a net return of $15.43 in cost savings per offender, he said, was a good one. But the underperforming program will get less money in the next budget cycle, which begins with hearings in September. The performance program is being expanded to a handful of other agencies this year.

Whether the programs are new or decades old, experts agreed that performance measures are only one factor to take into account when drawing up spending blueprints. As Texas critic Roberts said, performance-based budgeting “is not a panacea for making tough choices.”

“Every line item has a powerful constituency,” he said. “It means something to somebody. There are no accidents in budgets.”