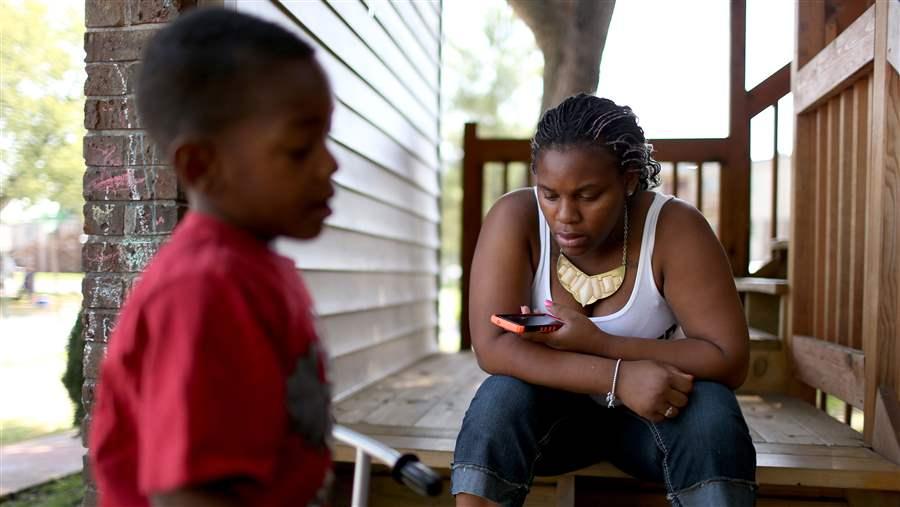 Donisha Dunn sits with her son, Tywon Payne, across the street from where an unarmed black teenager was shot by a white police officer in Ferguson, Missouri.  Ferguson is one of many U.S. suburbs where the poverty rate has increased significantly in the past several decades.  (Getty)

Ferguson’s fires run counter to the narrative about suburbia, the story Americans tell themselves about strip malls and rolling lawns, about McMansions and upward mobility. Instead, the unrest in the St. Louis suburb following the shooting of an unarmed black teenager by a white police officer evokes images of 1960s-era Watts, of burning inner-city neighborhoods in New York, Washington, Detroit and Chicago.

The tear gas and protests in Ferguson were sparked by the shooting of Michael Brown, but they point to deeper, more pervasive problems that are plaguing suburbs across the country: rapidly increasing poverty, scarce jobs and even scarcer resources.

“Poverty is rising in suburban communities and it’s smashing the stereotype of calm and prosperity,” said Lawrence Levy, executive dean of the National Center for Suburban Studies at Hofstra University. “All over the country outside major central cities, the rate of poverty in the suburbs is exceeding that of the (urban) places people used to leave to escape.”

Ferguson is not alone in this drastic shift in suburban demographics. Across the country, from Atlanta to Honolulu to Salt Lake City to Seattle, there are now more poor people living in the suburbs than there are living in cities.

Perceptions have yet to catch up with how radically the geography of poverty has shifted, according to Kneebone. Without an up-to-date understanding of the complexity of poverty, she said, suburbs often don’t have the resources needed to help their impoverished populations.

“We need to come up with a 21st century agenda,” said Sylvester Brown, community activist and former columnist with the St. Louis Post-Dispatch. “We know poverty is at the root of all this (in Ferguson). But I’m not hearing talk about the long-term solution, about what is really the belly of the beast, economic transformation.

“This is a country (wide) problem. It just happened to fire up in Ferguson.” 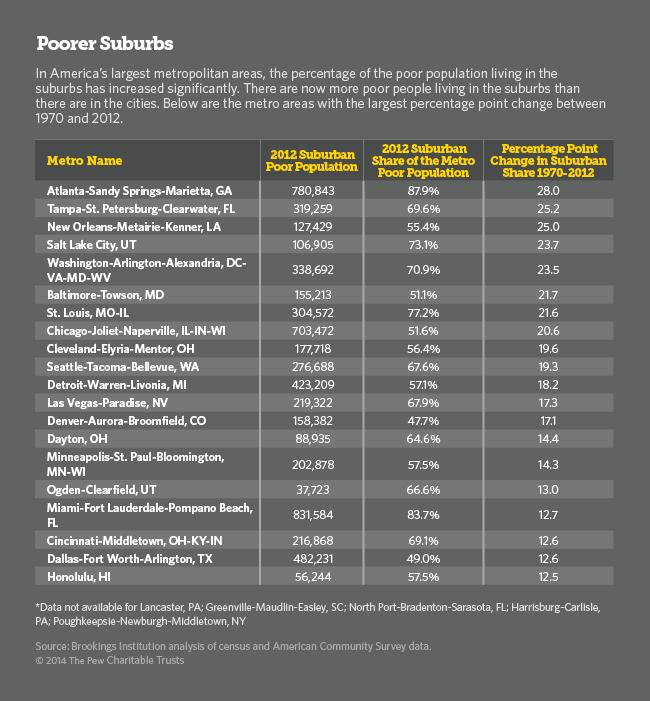 There’s no single path to poverty in the suburbs. Some of suburbia’s poor are the formerly middle class who were walloped by the Great Recession, losing jobs and homes when the housing bubble popped. Some are immigrants who bypassed the traditional urban route and headed straight for the ’burbs. Others are lower-income African Americans and Latinos who were pushed out of gentrifying cities as housing prices skyrocketed. Other people, some of them armed with federal housing vouchers, left cities looking for jobs, or safer neighborhoods or better schools.

“The movement to the suburbs is really about people moving to opportunity,” said john a. powell (he spells his name with lower-case letters), a professor at the University of California, Berkeley and director of the Haas Institute for a Fair and Inclusive Society.

“But low-income people have not landed in places of high opportunity in the suburbs,” powell continued. “They move from depressed cities to depressed suburbs. They are trying to move to opportunity and they are failing. Opportunity is moving away from them.”

In the suburbs, as in the rest of the country, race and poverty are inextricably linked. Yes, there are prosperous African-American suburbs, like Maryland’s Prince George’s County (outside Washington, D.C.) California’s Ladera Heights (Los Angeles) and New York’s Hillcrest (New York City). And yes, most poor suburban residents are white. But increasingly, the faces of suburban poverty are black and brown.

People of color in the suburbs are disproportionately likely to be poor and much more likely to live in neighborhoods with high concentrations of poverty. The disparities are stark, Kneebone said: over 50 percent of African Americans and Latinos live in poor suburban neighborhoods, compared to 23 percent of white suburbanites.

Case in point: Ferguson, where 25 percent of blacks live below the poverty line, compared to 11 percent of whites. (Ferguson is divided along strictly black/white lines; its Asian and Latino populations are quite small.) The median income for African Americans in Ferguson is $32,500 compared to $53,400 for whites. The black unemployment rate in Ferguson is 19 percent; white unemployment is 6.7 percent. In 1990, Ferguson was a majority-white enclave; today 67 percent of the population is African American. Its leadership structure, from City Hall to the police, remains overwhelmingly white.

Broader changes in the U.S. economy also have changed the character of the suburbs.  Jobs have moved out of cities and into the suburbs, even with the revitalization of many cities. But most are not the well-paying manufacturing jobs that bolstered the urban middle class for decades. Instead, suburban jobs are concentrated in the retail or construction sector—jobs that tend to pay less and were decimated by the Great Recession.

Even as the U.S. economy continues its slow recovery from the recession, a structural shift to lower-paying jobs is likely to exacerbate the suburban poverty trend.

Struggling in the Suburbs

In many ways, being poor in the suburbs is more difficult than it is in cities.

For one, transportation is often a problem: few suburbs boast the kind of reliable public transit systems of cities like Chicago, New York and Washington, making owning a car imperative. Commutes are often lengthy and expensive; a sick child in day care needing to be picked up from the other side of town can present a crisis for a parent who could lose a much-needed job.

For poor suburbanites, having a car can be both a lifeline and a liability. In St. Louis County, where Ferguson is located, there are 90 municipalities. In a nine-mile strip, a driver can drive through as many as 16 of them, says Thomas Harvey, co-founder and executive director of the Arch City Defenders, a not-for-profit agency that provides legal services for the indigent in St. Louis County. The Arch City Defenders released a study of the municipal courts in St. Louis County and found that in Ferguson, court fees were the suburb’s second largest source of revenue.

Often, Harvey said, their clients will get a traffic ticket driving through one of those 16 jurisdictions. Perhaps they’re driving a car that needs repairs before it can pass inspection. They can’t afford to pay for the ticket and their license is suspended.

Or they don’t show up in court because either they can’t afford to pay or they can’t take off from work or they can’t find childcare.  Now there’s a warrant for their arrest. Sometimes they’ll have tickets across multiple jurisdictions and everything snowballs until they’re in jail because they couldn’t afford to pay for the court fees, Harvey said.

“These are people who are making a choice between paying their electricity and getting their car fixed,” Harvey said. Many of his clients, he said, feel targeted by the police because they are African American.

Ferguson is home to a large apartment complex, located just across from where Michael Brown was shot. But most suburbs don’t have the kind of bleak housing projects that put inner cities like Chicago on the poverty map. Privation can look different in the suburbs, but poor is still poor. A poor person in a relatively prosperous suburban county, for example, might not qualify for health and social services because their zip code appears to be much richer on paper, according to Levy, of the National Center for Suburban Studies.

And most suburbs simply aren’t equipped — and in some cases, aren’t willing — to handle the problems presented by its poor populations. Most government and not-for-profit dollars are concentrated in the cities, leaving the suburbs scrambling for services. Few have adequate job training, foreclosure counseling, food banks or even multilingual social workers.

That’s partly because suburbs with large impoverished populations don’t have the tax base to fund such programs, said Ed Paesel, executive director of the South Suburban Mayors and Managers Association (SSMMA) in suburban Chicago.

In Chicago’s south suburbs, for example, tens of thousands of jobs disappeared in the 1970s and 1980s when steel mills were shuttered. When the jobs left, working-class suburbs became home to the working poor — and to the jobless.

Homes were left vacant and abandoned, and so, too, were many industrial sites. Property and sales tax revenues plummeted, squeezing schools reliant on that money. Middle-class families, deterred by the struggling schools, declined to move in.

“This is creating not just a moral dilemma for these communities, but it creates economic challenges as well,” Levy said. “How can you have a truly successful and sustainable economy in a region if more and more of your communities are sending your kids to the worst schools, have access to the fewest jobs, the worst health care and people have a harder time getting to work—if they have it?”

The Path Out of Poverty

Some communities are battling the suburban poverty crisis by encouraging jurisdictions to work together, combining resources and sharing solutions. In Montgomery County, Maryland, county government worked with local churches and other not for profits to create the Neighborhood Opportunity Network, which provides help for those in need of everything from paying utilities to health care to foreclosure prevention.

The city and county of Denver partnered with investors to create a transit fund that would build affordable housing close to mass transit, so that lower income residents would have easy access to jobs.

Chicago’s south suburbs are home to 43 municipalities, many of which have populations and face problems similar to Ferguson’s. When the housing industry tanked at the end of the last decade, government officials collaborated to jointly apply for federal government assistance. The idea was to think about the needs they had as a collective region of 650,000 inhabitants, rather than just that of individual towns, said Janice Morrissey, deputy director of housing for the SSMMA.

The association received about $29 million for housing rehab, neighborhood stabilization and workforce development. In 2010, the cross-jurisdictional collaboration expanded to focusing on economic development, from attracting new business to job training to food production. The group recently instituted a $6 million loan fund to encourage developers to build a mix of retail, commercial and housing developments close to mass transit.

It’s unclear whether leaders in Ferguson and St. Louis County will follow that path.

“My biggest fear is that this case will be resolved one way or another, and there will be a lot of federal money given to (local) nonprofits. But if they don’t get new voices at the table, it won’t address the systemic problems,” the Arch City Defenders’ Harvey said.