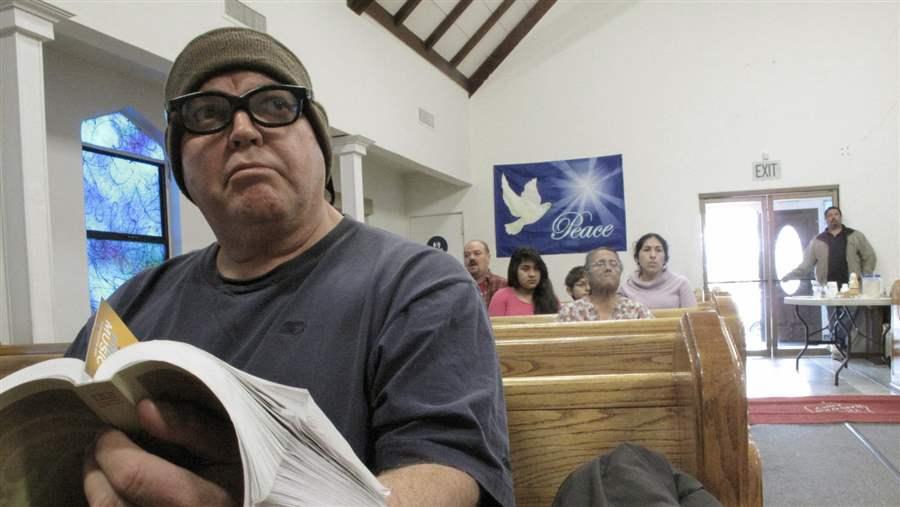 Unemployed forklift driver William Felix, 56, attends a devotional at the Salvation Army in Los Banos, California. California and some other states are trying to prevent employers from discriminating against job applicants who are unemployed. (AP)

The day Debra Wolverton was laid off from her retail sales job in June 2013, she stopped by some businesses on her way home in Austin, Texas, to ask for work. She was told to apply online.

She did, countless times for countless job openings. She seldom got a response. Today, Wolverton, 48, is still without full-time employment. She’s convinced her resume is often rejected by computer programs that screen out jobless applicants who are older — people employers view as too expensive — or  who have been out of work a long time.

Some cities, states and President Barack Obama have sought to help long-term unemployed people like Wolverton, who they say shouldn’t be passed over for jobs because their resumes show an employment gap. But it hasn’t been easy.

As the nation’s jobless rate has dropped to 6.2 percent, those who’ve been out of work for months or years often feel forgotten. And many no longer look for work.

About 3.2 million people have been out of work for 27 weeks or longer, the Labor Department reported earlier this month. Called the long-term unemployed, they comprise about a third of those who are jobless. 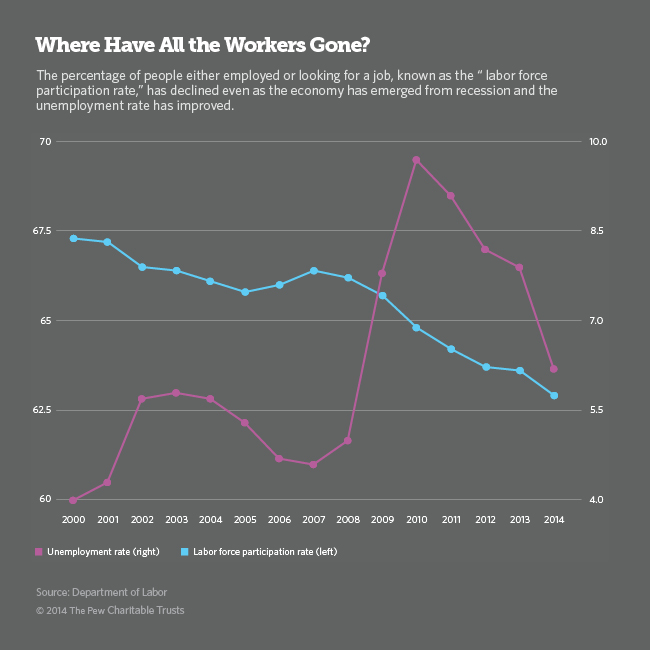 Another 2.2 million aren’t included in those numbers. They’re only marginally looking for work and have all but disappeared from a labor market that’s been shrinking since the Great Recession.

New York City and Madison, Wisconsin last year banned employers from discriminating against job applicants who are unemployed. Violators could face fines or possible lawsuits. The District of Columbia enacted a similar law in 2012. The same year, Oregon banned help-wanted advertising that said only those with a job need apply. So did Chicago.

Some states have stepped up efforts to get the unemployed back to work quickly by offering one-on-one or group counseling and training to help people with the actual mechanics of the modern day job search. But state legislation to prevent discrimination against the unemployed has often failed.

Earlier this month, Republican Gov. Chris Christie vetoed a bill that would have made New Jersey the first state to ban discrimination against the jobless, although in 2011 the state outlawed advertising that said only the employed need apply.

The California legislature last week passed a bill that would make it illegal for employers to discriminate against unemployed people in advertising and in hiring. But two years ago, Democratic Gov. Jerry Brown vetoed a less stringent bill that would have banned only discriminatory advertising.

Obama failed to get federal legislation passed in 2011. So in January, he ordered federal agencies not to discriminate against the long-term unemployed. He also signed up 300 major companies, ranging from Apple to McDonald’s to Wal-Mart, to pledge to hiring practices that give the jobless a fair shot.

“Folks who’ve been unemployed the longest often have the toughest time getting back to work,” Obama said in unveiling the companies’ pledge. “It’s a cruel Catch-22: The longer you’re unemployed, the more unemployable you may seem.”

A White House report out last month on the nation’s shrinking labor participation rate said gloomy job prospects likely have driven some older workers into retirement. It also pointed to research that indicates the longer people are unemployed, the lower their odds of finding work. A big factor is that employers discriminate against job applicants with big gaps of employment on their resumes.

In a 2012 study, three researchers from UCLA and one from the State University of New York at Stony Brook found a hiring bias exists against applicants as soon as they’re unemployed and only gets worse the longer they are out of work.

Another, conducted last year by Northeastern University researcher Rand Ghayad, found the bias was more severe the longer an applicant was jobless. He found the long-term unemployed had to send out 3.5 times as many resumes as the short-term unemployed just to get an interview.

“It’s a stigma,” said Ian Calderon, a Democrat who sponsored the Assembly legislation in California. “If you’re unemployed, there’s an attitude they feel they face (from employers) of ‘If nobody else wants you, why should I want you?’”

Calderon’s bill would bar employers and recruiting firms from advertising only for employed people and prohibit employers from rejecting for consideration a qualified candidate just for an employment gap. Violations could carry fines from $1,000 to $10,000.

“It’s not like we’re trying to tell business who they can hire,” Calderon said. “We’re just trying to get their feet through the door.

“I think it’s the business of government to see that everyone plays by the rules and everyone has an opportunity,” he said.

Anti-bias bills to help the unemployed have been introduced in 24 states and D.C. since the start of 2011, according to the National Conference of State Legislatures. But few got very far.

Foes argue that while the discrimination is wrong and employers hurt only themselves if they do it, the laws would be hard to enforce and add to the legal woes of employers who often get hundreds of applications for a few openings in today’s tight job market.

“Do I think employers should discriminate against the unemployed? Absolutely not,” said Dan Ryan, who runs an executive search and talent development firm in Nashville, Tennessee. “I don’t know how you legislate against it.”

Laws will only clog the courts with complaints that will be hard to prove, he said. The problem is so many people are looking for work when jobs are still hard to come by. “No piece of legislation will solve that,” he said.

The issue has faded, too, as employers are less blatant in their advertising, said Mitchell Hirsch, who advocates for the unemployed with the National Employment Law Project.

“While it’s not as visible as it once was, it’s still a pernicious and pervasive practice,” he said.

Employers or the recruiting firms that companies hire to screen applicants depend largely on online job applications, he said. They can write computer programs that screen out people with employment gaps.

“It’s very difficult to change these kinds of behaviors,” Hirsch said. “We would hope that there is less of this happening as the labor market improves.”

It’s also very hard to prove the discrimination with so many out of work, even the staunchest advocates for the unemployed say.

“How do you tell if someone is discriminating? Even if it’s systemic, I’m not sure there’s a way to figure that out,” said Katherine McFate, president of the Center for Effective Government.

She said efforts instead should go to extending unemployment benefits to help the long-term unemployed survive until the economy creates more jobs.

The legislation may be more of a gesture to the plight of the unemployed than a solution to a problem. The D.C. Office of Human Rights, for instance, has received no complaints of jobless discrimination since the District’s law passed in 2012.

Democratic state Sen. Jim Whelan, sponsor of the New Jersey legislation, said he hadn’t gotten any complaints from his Atlantic City constituents, but introduced the bill because discriminating against the unemployed “doesn’t seem right.”

He also has a big unemployment problem in his district that will only worsen as four casinos soon will be shuttered, eliminating even more jobs.

Ryan, the recruiter, worked with the Society for Human Resource Management, the world’s largest group of HR professionals, to help craft hiring guidelines so the long-term unemployed aren’t bypassed. They were incorporated into the practices the companies agreed to follow in January at the White House.

Ryan advises the unemployed to put their efforts into improving their jobs skills and circumventing online applications by networking with people who can help them get an interview.

In Austin, Debra Wolverton decided to try something else after losing her retail sales position. With financial help from her family, she is pursuing a real estate license.

“I just couldn’t sit here and do the same thing all over again and again,” she said of sending out job applications. “I applied for everything. I couldn’t find anything. I decided I had to go into business for myself.”

Until she gets her license and can start making money selling houses, she’ll continue looking for any kind of work because extended unemployment benefits are gone.