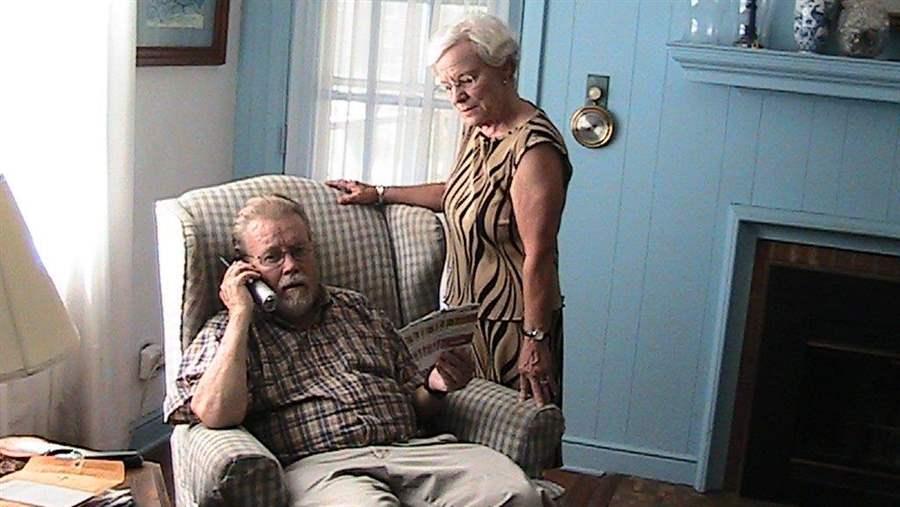 Virginia resident Art Hurme, left, shows his wife, Sally, the reloadable debit cards that he purchased to pay scammers who conned him out of $3,000 earlier this year. States are trying to beef up consumer laws protecting seniors against financial fraud and exploitation. (Jenni Bergal/Stateline)

Sally Hurme figured that if anyone knew about financial scams targeted at older Americans, it would be her family and friends. After all, Hurme, an attorney and AARP project advisor, had spent two decades educating seniors across the country about fraud and how to avoid it.

That’s why she was so shocked when her own husband, Art, 71, became the victim of a fraud in January. The retired Army Corps of Engineers marine biologist wound up losing $3,000 in an “imposter scam” after receiving a call at his Alexandria, Virginia, home from a sobbing woman claiming to be his daughter. She told him she had been in a car accident and was under arrest for drunken-driving in California and needed money to get out of jail.

“The real innovations are happening at the state level,” said Mary Twomey, co-director of the National Center on Elder Abuse at the University of California, Irvine. “The states are definitely stepping up.”

This year, lawmakers in at least 28 states and the District of Columbia introduced legislation addressing the issue. Some measures focus on enhancing criminal penalties. Others target caregivers who exploit elderly charges. Some require financial institutions to report suspected exploitation.

No one keeps statistics on exactly how many seniors have become victims of financial fraud or exploitation. Often, they don’t report it to authorities out of shame or embarrassment.

But there is growing evidence that the problem is substantial. The Federal Trade Commission’s Consumer Sentinel Network database, which collects consumer complaints and makes them available to law enforcement, contained 123,757 fraud complaints in 2013 from victims who had identified themselves as aged 60 and over.

A 2011 study by MetLife estimated that the annual loss to elderly victims of financial fraud (perpetrated by strangers) and abuse (perpetrated by family, friends or neighbors) was at least $2.9 billion, a 12 percent hike over its 2008 estimate.

And a study released this month in the Journal of General Internal Medicine found that one in 20 older adults in New York state reported that they had been financially exploited, usually by a family member, but sometimes by a friend or home-care aide.

“When you’re an elder and you cannot recoup the money, these financial crimes are devastating to your peace of mind and to your actual health and welfare,” Twomey said. “People often never see that money again. A lot of times the scam artist is in another country. And if it’s a family member who’s committed the financial abuse, the money often has gone up somebody’s nose or to their gambling problem.”

Heather Morton, a legislative analyst for the National Conference of State Legislatures, said financial scams aimed at seniors are “a significant topic for (state) legislators who are looking for ways they can help their constituents.”

Among the measures passed within the past two years:

North Carolina Democratic state Rep. Rick Glazier said he sponsored the financial exploitation bill in his state because many senior victims had no chance at restitution once the money had disappeared.

“People were being ripped off, and by the time you found out who was at fault and charges were brought, the assets were gone,” Glazier said. “You could deal with the scammers criminally, but the victims were left holding the bag. For a lot of senior citizens, losing $5,000 or more can dramatically affect their lives.”

A Range of Scams

Authorities say financial crimes against seniors can be perpetrated by someone they know or by a stranger. Victims run the gamut from savvy investors who play the stock market to people with dementia who need in-home care.

Relatives and caregivers can misuse a victim’s credit cards or ATM without permission or deceive them into signing away a deed or opening a joint bank account or giving them power of attorney.

Odette Williamson, a staff attorney at the National Consumer Law Center, said scams against the elderly are becoming increasingly sophisticated.

“Our population is aging rapidly,” Williamson said. “A lot of the older adults have a substantial amount of assets, so they’re sitting targets.

Some states have started working with financial institutions to beef up training and reporting of financial exploitation of seniors.

In Maine, for example, a public-private partnership launched the Senior$afe program earlier this year to help bank and credit union employees learn how to spot red flags and notify authorities. Among some telltale signs: customers who are suddenly joined by a third party directing their actions or showing excessive interest in their finances or who make frequent large withdrawals or attempt to wire big sums of money.

Under the program, tellers who see suspicious activity notify their supervisor, who reports it to adult protective services if the victim appears confused or incapacitated, or to the state securities agency if the victim does not. The securities office then decides whether to keep the case and investigate or refer it to law enforcement or another agency.

So far, about 250 bank and credit union employees have been trained, according to Judith Shaw, who runs the securities office, which is a Senior$afe partner.

“This is a significant program,” Shaw said. “We are a very rural state. There is a lot of social isolation among our seniors, which makes them more vulnerable to abuse and exploitation.”

Shaw knows about the problem all too well. Her 80-year-old mother, who lives in a small Maine town, started acting strangely last year when she visited her credit union.

The branch manager noticed that the elderly woman, who came regularly, couldn’t recall her PIN or how to use the ATM machine. She appeared sad and worried and looked untidy, as though she had slept in her clothes. The manager took a look at her account and discovered that mysteriously, $50 was being withdrawn automatically every month. She called Shaw’s sister.

It turned out that Shaw’s mother, who has since been diagnosed with Alzheimer’s disease, had received an email that looked like it came from the government, notifying her about a “work-at-home” opportunity. The retired legal secretary was intrigued, and signed up. She ended up being conned out of $350 – not a small amount for a woman living on $1,200 a month in Social Security, Shaw said.

Art Hurme, the Virginia fraud victim whose wife works at AARP, said he sympathizes with other seniors who’ve been scammed.

Hurme, who wears hearing aids, said he got a noontime call in January from a woman claiming to be his daughter, a Virginia high school teacher. Her voice was muffled and the connection was bad. She said that she had taken a last-minute trip to a funeral in California with a friend and had been in a car accident and was being charged with drunken-driving.

Hurme said he thought it all sounded strange, but she was convincing, as was her “court-appointed attorney,” who told him the charges would be dropped if he would send $3,000 to pay the medical expenses of a woman injured by his daughter in the accident.

“These people were slick, and it was totally scripted,” Hurme said. “She told me she hit her mouth on the windshield, which was why she could hardly talk. And my daughter rarely drinks, but they explained that by saying she had gone to a bar to have a glass of wine with her friend and that she got in an accident trying to change lanes.”

As instructed, Hurme rushed to his bank, and then to Walmart, where he bought six $500 MoneyPak reloadable debit cards. The cards give instant access to cash and are untraceable. He returned home and read the card numbers to the “attorney” over the phone. He waited for a call back to assure him that his daughter had been released from jail, but that call never came. His money was gone.

Hurme’s wife, Sally, calls it a classic “imposter scam,” in which a senior gets a call out of the blue from someone claiming to be a grandchild or other relative saying he or she is in trouble or has been arrested and needs to have money wired to them.

Fraudsters typically warn the victim not to contact anyone else. Hurme said his “daughter” swore him to secrecy, saying she was embarrassed about the DUI arrest. But as soon as his wife came home and started asking questions, she knew immediately that it was a scam.

“I felt pretty bad. Really stupid,” Art Hurme said. “I’ve got a master’s degree and worked at the Army Corps for 38 years. This scam worked because of the urgency and their insistence that I not call anyone. If I had, their whole house of cards would have collapsed.”