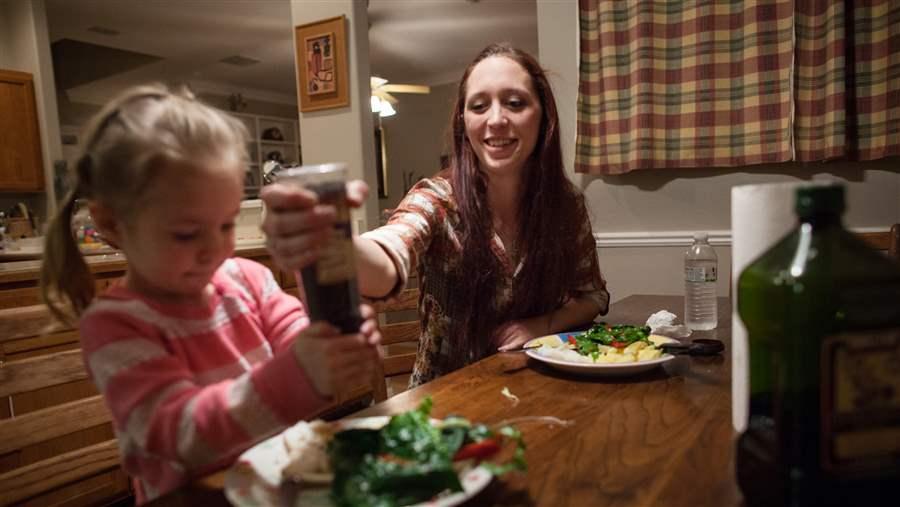 Food stamp recipient Maggie Barcellano eats dinner with her daughter in Austin, Texas. Though the U.S. unemployment rate is declining, food stamp statistics suggest many Americans still are finding it hard to get by. (AP)

Luxuries were affordable for Linda Fish before she lost her job in retail management in 2009.

“I won't lie. The dinners out, the perfect martinis, the salon visits with a master stylist, and the rooms at nice hotels when I was too lazy or tired to do the long commute home—these things I could afford and they made me very, very happy,” the Chicago resident wrote on her blog soon after she became unemployed.

But in the years after she lost her job, Fish “learned to stop worrying and love minimum wage.”  She gained a new appreciation for beans, pasta, and oatmeal when she took a $9 per hour job as a bookstore clerk.  It was a shock, Fish said, to go downscale “in a culture where we have been systematically weaned from living with family, cooking our own food, sewing our own clothes, walking,” she told Stateline.

Fish had a job, but she was what economists call “underemployed.” The plight of people like her might explain a puzzling discrepancy between the declining unemployment rate and the rising rate of food stamp usage.

The overall U.S. unemployment rate has steadily declined since the recession officially ended in June 2009. But many Americans still are finding it hard to get by, even if they do have jobs.  A key indicator of economic hardship—enrollment in the Supplemental Nutrition Assistance Program (SNAP), commonly known as food stamps—is higher in every state than it was five years ago, even though unemployment has dropped in every state during the same period.

Economists say the official unemployment rate underestimates economic pain, since it doesn’t include people who have stopped looking for work or who are barely getting by with part-time or low-paying jobs.  The official U.S. unemployment rate is 6.3 percent. But an alternative federal measure that includes people who want to work but are too discouraged to keep looking, and those working part-time though they would prefer to work full-time, is 12.6 percent.

Fish never had to resort to food stamps, but enrollment in the program is another way to capture the “underemployment” of people like her, according to the  Food Research and Action Center (FRAC), which advocates to reduce hunger in the U.S. “SNAP is an important lifeline for many people struggling with unemployment and underemployment,” the center said in explaining its emphasis on the expanded unemployment numbers.

States with the highest underemployment rates are California, Nevada and Arizona, where the expanded rate is 16 percent. The lowest rates are in North Dakota (5.5 percent), Nebraska (7.3 percent) and Wyoming (7.9 percent)

There are now five states, along with the District of Columbia, where at least one in five people are on food stamps – Mississippi, Oregon, New Mexico, Tennessee and West Virginia. In 2009, there were none in that category, according to a Stateline analysis of data from the U.S. Department of Agriculture, which administers the program. The highest usage rate at that time was 17 percent in the District of Columbia.

Generally, food stamps are available to people making up to 130 percent of the poverty level, currently $2,552 a month for a family of four, and provide up to $189 a month per person. The benefit money is issued on a debit-style card, unlike the original stamps and coupons that were used when the program first began.

Nationwide, food stamp usage has started to drop slightly from the 2012 historic high of about 48 million people. It is currently down to about 46 million, in part because some states have reinstated work requirements. But total enrollment remains nearly triple the 17 million food stamp users in 2000. In 2009 nearly 39 million people were on food stamps, and the number rose to 44 million in 2010.

Yet in every state, unemployment is down from 2009 levels, ranging from South Carolina’s dramatic drop to New Mexico’s mild improvement from 6.9 percent to 6.3 percent.

Much of the discrepancy between improving employment news and continued economic suffering, as measured by food stamp use, is due to people who may be employed but making far less than they were before the recession. While Fish, the former retail manager, lost her job in middle age, underemployment is particularly rampant among young college graduates. A New York Fed study this year found that underemployment for college graduates has been steadily climbing since 2001 and the quality of their temporary jobs has steadily dropped.

Since food stamps are federally-funded but administered by states, participation also can reflect how successful a state has been at signing up those who are eligible, including jobless workers. “If you look at areas that were especially impacted by the recession, you’ll see some have really aggressively pushed to boost participation,” said Jennifer Adach, a spokeswoman for FRAC.

The USDA measures food stamp participation compared to the number who are potentially needy, using unemployment, poverty and near-poverty as factors, to show which states could benefit from more outreach. According to its most recent report in 2012, Delaware, the District of Columbia and Vermont signed up the highest percentage of potential beneficiaries, while Wyoming, California and Utah reached the lowest proportion of the needy.

Economic conditions are particularly dire in New Mexico, which saw some of the fastest growth in food stamp use since the recession – a jump of more than 50 percent – from 291,000 recipients in 2009 to more than 440,000 at its peak in 2013.

The total number of full- and part-time jobs in the Albuquerque area is hovering around a 2012 low, leading the Brookings Institution to declare a double-dip recession there in June. Activists accuse state government of knocking thousands off the food stamp rolls for technical violations, like failing to document job searches.

New Mexico and South Carolina have both announced that they will reinstate work requirements for some food stamp recipients this year, despite a federal ruling that it’s unnecessary in most states.  Other states that reinstated work requirements for food stamp recipients this year are Delaware, Iowa, Kansas, Nebraska, Oklahoma, Utah, Virginia and Wyoming.

“They’re not giving people enough notice that they’ll lose benefits if they don’t fill out these forms,” said Louise Pocock of the New Mexico Center on Law and Poverty, adding that the center is trying to get benefits restored for some people.

Sherry Hooper, director of Food Depot in northern New Mexico, said demand for food help is up 30 percent since 2008. Ranching, mining and tourism industries that once supported residents of the remote area have fallen on hard times, she said, and because of rural isolation, many poor families have to shop at gas stations. “They’re expecting people to seek jobs that are just not there,” she said.

A spokesman for the state human services department, Matt Kennicott, said the state wants people to be more self-sufficient but is not trying to take benefits away or save money.  Unemployed workers can keep food stamps if they can document job training, he said. “There are jobs available,” said Kennicott. “The people in the work force don’t necessarily have the skills required by those employers. We need to get those people trained.”

At the other end of the spectrum, booming North Dakota, the state with the fastest-growing economy, according to the U.S. Bureau of Economic Analysis, has seen the smallest increase in food stamp enrollment since 2009. The total number of North Dakota’s food stamp users grew only slightly from 53,000 to 54,000, barely 2 percent, as the population increased 12 percent.  It was the only state to see a decline in food stamps as a percentage of the population between 2009 and 2014, from 8.2 percent to 7.5 percent.

Not all of the increase in food stamp usage is a reflection of economic pain, however. A 2013 USDA report recommended states take additional anti-fraud measures, such as checking on excessive new card requests, which could indicate illegal selling or swapping of benefit cards.  The report found that illegal sales and trading is small, about 1 percent of total benefits, but it is growing as more small stores get permission to accept them.

In Louisiana, a legislative audit found that about $1.3 million in benefits went to dead people and recommended more checking against death records and more aggressive attempts to recover misspent money after deaths are discovered. During the period of the audit, the state disbursed $1.08 billion in food stamp benefits. New York included a provision in this year’s budget setting stiff penalties for using or accepting food stamp money in strip clubs, liquor stores or casinos.

But for all those who game the system, there are many more people who could legitimately qualify for food stamps but choose not to enroll in the program.

Among those who never thought of food stamps was Fish, who said her parents instilled in her a horror of public aid, even though her salary at the book store might have put her within the income eligibility limits, considering her husband was retired, and they had two children at home. “Strangely enough, none of my minimum-wage co-workers ever talked about (food stamps), but they did talk about not having enough money to eat,” she said. “I'm sure many a meal was missed.”