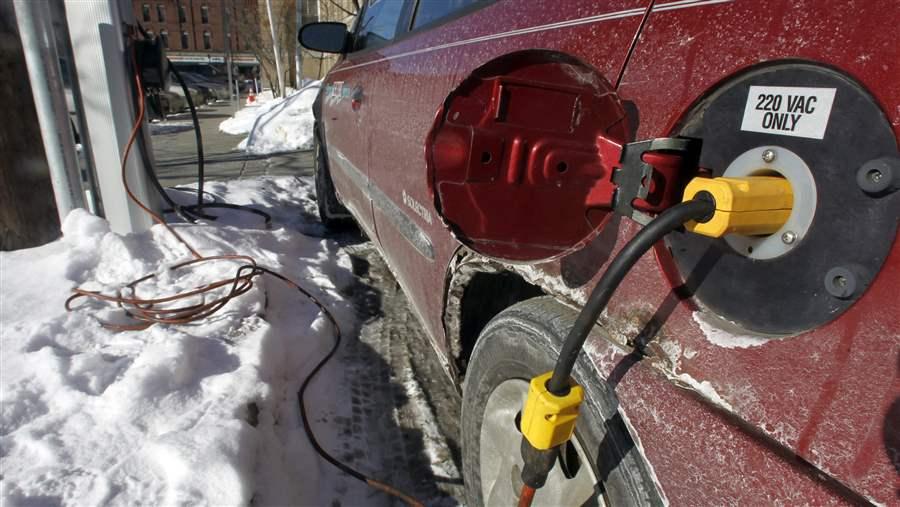 An electric car charges up in Montpelier, Vermont. Carpooling and cars that run on electricity or burn less gasoline may be good for the environment, but they are shrinking per-gallon gas tax revenue. Some states are looking at alternatives. (AP)

It was the potholes that convinced real estate broker Lester Friedman that there’s got to be a better way to pay for road construction and repairs.

Friedman, who lives in Bend, Oregon, drives about 8,000 miles a year in his 1999 Chevrolet Suburban, ferrying clients throughout central Oregon. He sees roads in various states of disrepair and he can tell you first-hand that the current arrangement just isn’t working.

That’s why he volunteered to test a new program in his home state that would levy a tax on miles driven, rather than on each gallon of fuel purchased. In every other state, and at the federal level, gasoline taxes are levied on a per-gallon basis. 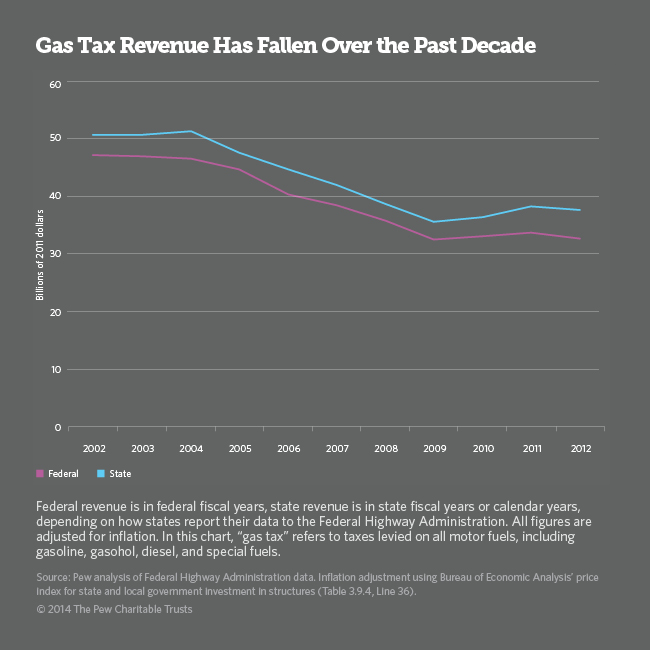 Friedman’s view from behind the wheel is only anecdotal, but state officials across the country know the current per-gallon gasoline tax is outdated and increasingly insufficient. It is raising less revenue as cars become more fuel efficient and more people turn to public transportation and electric cars. Meanwhile, crumbling infrastructure is increasing the need. Faced with these facts, many states are looking for alternatives to the gas tax.

California is considering a plan similar to Oregon’s. Virginia tried another route last year, eliminating the state’s 17.5 cents per gallon motor vehicle tax on gasoline and diesel and replacing it with a 3.5 percent tax on the wholesale price of gasoline and a 6.0 percent tax on the wholesale price of diesel.  In addition, the state dedicated a portion of the general sales tax to the highway fund. And Missouri put a multi-billion-dollar sales tax hike for transportation on the ballot earlier this month, but voters soundly rejected it.

“In most places, (the gas tax) is not keeping up with inflation because it’s a per-gallon tax and it’s not indexed,” said Norton Francis, senior research associate at the Tax Policy Center, a progressive think tank. “The revenue is not keeping up, and the road construction and other project needs are growing.”

Only a few states index gas taxes for inflation: Florida, Maryland and Massachusetts. According to a study by the conservative Institute on Taxation and Economic Policy , most state gas taxes, especially those not indexed, are “built to fail.”

Since the federal gas tax was last increased to 18.4 cents per gallon in 1993, inflation has eroded its value by 40 percent, according to Ben Husch of the National Conference of State Legislatures.  States that tax by the gallon have fared no better, leading many to look at models like Oregon’s.

Last week, President Barack Obama signed a bill transferring $11 billion into the federal Highway Trust Fund – a temporary fix to prevent the fund from going dry. Enactment of this legislation prevented the U.S. Department of Transportation from having to implement its cash management plan, which would have delayed reimbursement payments to state departments of transportation, according to the National Association of State Budget Officers.

In Oregon, a pilot program will test the “mileage-driven tax,” which eventually could replace the state’s per-gallon gas tax.

Private contractors are bidding to devise a way to calculate mileage. Several consultants will be selected and each could have a different method, said James Whitty, manager of the Oregon Office of Innovative Partnerships and Alternative Funding. The state is starting to sign up volunteers for the program, including real estate broker Friedman, with the goal of getting 5,000 testers in place by next spring to try out a variety of mileage calculation methods.

Another volunteer, Michelle Giguere, of Portland, said she signed up because it’s important to get data before making a policy decision. Giguere said she doesn’t put many miles on her Jaguar during the week, when she commutes to her job at a law firm. But she racks up large gas bills on the weekends because she often drives to recreational areas that are more than 100 miles away.

“It’s completely obvious that the gas tax is not sustainable right now to keep our infrastructure funded,” she said. “I’m curious how this is going to work. What Oregon is doing is really smart.” 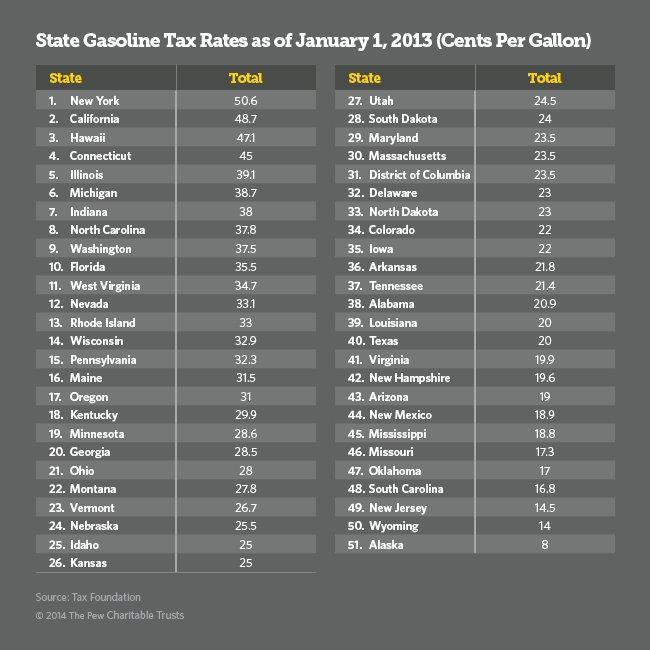 One way to monitor mileage would be an odometer-like device that simply keeps track of miles driven. (The motorist would receive a refund for miles driven out of state.) A smarter system could involve GPS monitoring, and still others could rely on smart phone apps or a combination of tracking systems.

The proposed tax rate is 1.5 cents per mile, which is the current state gas tax rate of 30 cents per gallon divided by the average car’s miles per gallon, which is 20. Friedman, with his gas-guzzling Suburban, probably would do better under the mileage tax than the per-gallon tax. Drivers with more fuel efficient cars might do worse.

Civil liberties groups initially had qualms about the program, but when a method was proposed that did not rely on GPS, their fears were assuaged, according to Becky Straus, legislative director for American Civil Liberties Union of Oregon. Straus also said provisions in the test program that do not allow the information to be used by law enforcement without a probable cause warrant and require the information to be destroyed after a set period of time, also eased concerns.

“We were able to get to a place where the ACLU did feel good about the program,” she said.

Friedman and Giguere, along with a half dozen other volunteers interviewed, expressed no privacy concerns. They cited the fact that cell phones already have tracking software in them. “For the tinfoil hat people it’s always a big deal, but … I don’t see that as a big issue,” Friedman said.

The declining revenue stream is what led Oregon to the experiment, Whitty said, and other states are watching closely.

“There’s quite a lot of trepidation about what’s happening with motor vehicles as far as fuel efficiency goes,” Whitty said. That’s a good thing, to have fuel efficiency, but if a state is heavily depending on the gas tax, if the efficiency goes up, the revenue goes down. Electric vehicles don’t burn any gas. The question is what do you do?”

In California, state Sen. Mark DeSaulnier is championing a bill that would authorize a pilot program similar to Oregon’s. DeSaulnier said California’s road maintenance and repair fund is $300 billion short, and the state’s gas tax is not keeping up. “We clearly have to find a funding source,” he said. “And a gas tax (increase) is not an easy thing to pass.”

He noted that California accounts for one-third of all of the hybrid cars purchased in the nation and that the state has incentives for the purchase of electric and hybrid vehicles.

“It is not lost on me that people bought more electric cars and we wanted them to do that. Now you are punishing them for doing the right thing. But on the other hand, you can’t drive on roads that are continuing to deteriorate.”

In Virginia, the new fuel tax collections are going well, but the state’s economy has been slowed by federal budget cuts and lower than expected sales tax revenues, according to Michael Maul, Virginia’s associate budget director. While final numbers are not available, he said, the revenue may be lower than expected.

“What it did do was helped us stabilize when the last of the federal stimulus funds ran out,” he said. That was a huge chunk of money. This money allowed us to keep maintenance going, so we were not robbing from construction.”

Missouri has to go back to the drawing board to figure out how to raise money for roads after 59 percent of voters earlier this month rejected a three-quarter cent increase in the general sales tax, in hopes of raising $5.4 billion over the next decade for roads.

State Sen. Mike Kehoe, the Jefferson City Republican who sponsored the bill that put the question on the ballot, said the way forward is unclear. The only thing that’s sure, he said, is that Missouri, with one of the lowest gas taxes in the nation at 17 cents a gallon, doesn’t have enough money to fix its roads. He said community forums, roundtables, focus groups and blue ribbon commissions all agreed that hiking the sales tax would work. But the voters disagreed. “What will Missourians approve?” he mused.

Kehoe said he has studied the Oregon program. “We are going to have to get outside the box,” said Kehoe, a car dealer by trade. “Infrastructure safety is the most important thing states can offer.”