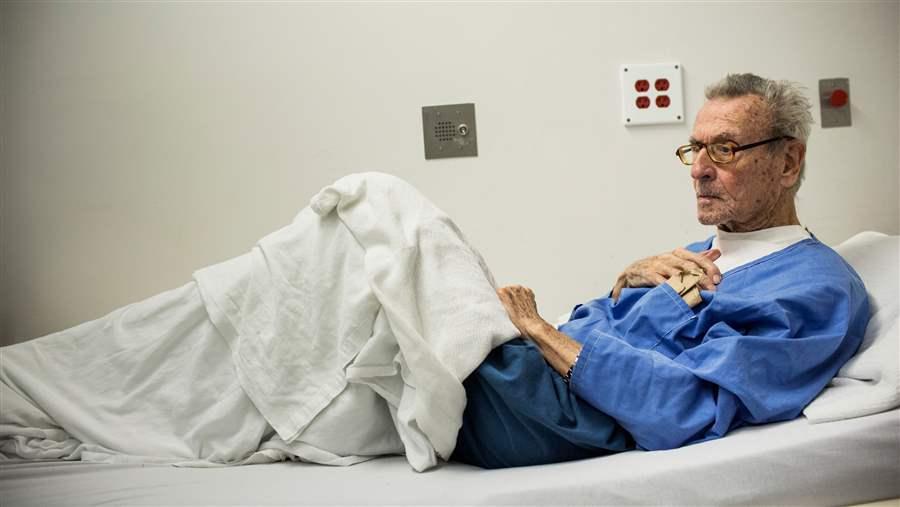 Michael Sanchez, age 84, lies in in an infirmary bed at Valley State Prison in Chowchilla, California. As the number of elderly prisoners increases, states are looking for cost-effective ways to provide long-term care. (Getty Images)

Providing health care to an aging prison population is a large and growing cost for states. Not only do inmates develop debilitating conditions at a younger age than people who are not incarcerated, but caring for them in the harsh environment of prisons is far more expensive than it is on the outside.

Of the 2.3 million adults in state and federal prisons, about 246,000 are 50 or older, according to the National Institute of Corrections. The U.S. currently spends more than $16 billion annually caring for these aging inmates, and their numbers are projected to grow dramatically in the next 15 years.

“In a couple of years,” said Donna Strugar-Fritsch, a consultant with Health Management Associates, “this is the only thing people are going to be talking about.  It’s getting worse by the minute.”

In the last five years, a handful of states have tried to contract with private nursing homes to care for some of their elderly and disabled inmates under so-called “medical parole” programs that allow prisoners to receive care outside of a prison while remaining in state custody. But few private facilities have been willing to accept them. Likewise, courts and communities have tended to resist so-called “compassionate release,” which cuts short the sentences of elderly or dying inmates so they can spend their last days on the outside. 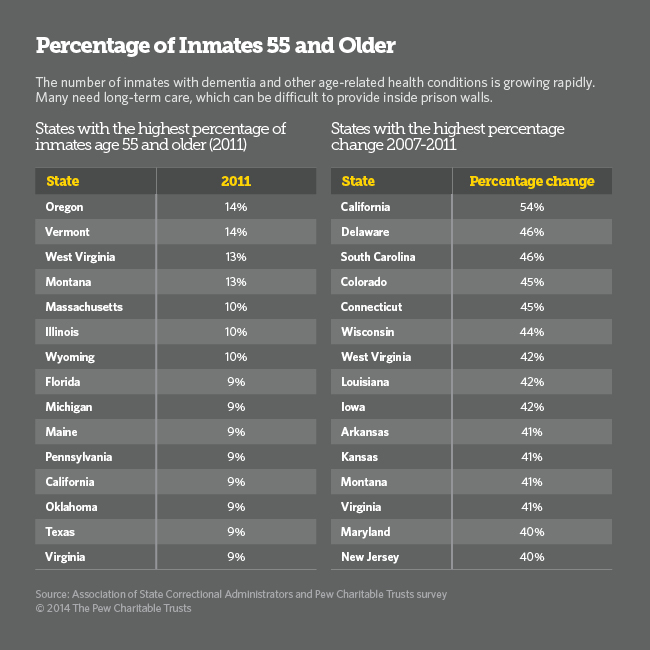 Two years ago, Connecticut tried a different approach. Instead of attempting to place prisoners in nursing home beds next to someone’s elderly parent, the state asked the commercial nursing home industry to provide a facility that would accept a steady stream of prison inmates and patients from the state mental hospital who required long-term nursing care.

A handful of states are interested in following Connecticut’s lead; Michigan is seeking industry proposals for a similar arrangement, and Kentucky and Wisconsin are considering doing the same. But in other states, officials may lack the political will to take on residents who don’t want convicts in their midst. And even in Connecticut, it remains to be seen how far the state can take its plan, given the public backlash it already has experienced.

Technically, the winning bidder for Connecticut’s corrections business, 60 West, is just like any other nursing home.  It is not locked down, does not employ guards and it accepts applications from anyone. Located in Rocky Hill, the 95-bed nursing facility opened in May 2013 and is already half-full. Its only residents are patients transferred from state prisons and Connecticut Valley Hospital, the state’s only residential mental institution.

Besides providing more humane and less expensive care than Connecticut’s prisons can offer, 60 West is certified to receive federal Medicaid payments. As a result, the state’s taxpayers will save more than $5 million in corrections health care costs annually, once 60 West is filled.

Medicaid on the Outside

Under the 1965 law that created Medicaid, anybody entering a state prison forfeited Medicaid eligibility. The same went for those entering local jails, juvenile lock-ups and state mental institutions.

But an exception to that general rule opened up in 1997 when the U.S. Department of Health and Human Services wrote to state Medicaid directors saying inmates who leave state or local facilities for care in hospitals or nursing homes can get their bills paid by Medicaid. The exact federal contribution varies by state. But in all of them, Washington covers at least half the costs of the federal-state health care program for the poor.

In addition to the incarcerated, those on probation or parole or under house arrest can participate. Even in states that have not expanded Medicaid to low-income adults under the Affordable Care Act, most elderly or disabled prison inmates qualify under existing Medicaid rules, as long as they receive care outside.

That means some portion of the nation’s elderly and disabled inmates could receive federally-subsidized long-term care outside of prison walls, potentially saving states millions of dollars in health care costs.

The prison population in Connecticut is aging faster than in most other states and its growth is not expected to subside any time soon.  Between 2007 and 2011, the proportion of inmates age 55 and older increased 45 percent, according to a survey by the Pew Charitable Trusts and the Association of State Correctional Administrators. Nationwide, the number of elderly inmates is projected to more than triple in the next 15 years, according to data compiled by the American Civil Liberties Union.

The rise in older prisoners is partly a result of tough-on-crime laws in the 1980s and 1990s, including mandatory minimum sentences and “three strikes” rules. It also reflects the aging of the U.S. population generally. Prisoners, like everyone else, are living longer. Many elderly inmates came into the prison system late in life, some after serving previous sentences. Others are serving lengthy sentences because of the nature of their crimes.

Bedridden, in wheel chairs, and often suffering from dementia, elderly prisoners cost more than twice as much to care for as their younger counterparts, and most pose little threat to society.  In prison infirmaries, they are often preyed upon by healthier inmates.

“Prisons aren’t equipped philosophically, legally, or personnel-wise to deal with the elderly in any way,” Strugar-Fritsch said. “It’s already a failed experiment for prisons to be serving as mental institutions. It will be another failed experiment if prisons try to serve as nursing homes.”

Nevertheless, some states have resorted to building new nursing facilities within prison walls, a costly undertaking that excludes the possibility of Medicaid payments.  With prison infirmaries filled to capacity and few outside facilities willing to accept their elderly and infirm inmates, they saw no other choice.

In California, for example, where about 136,000  people are incarcerated, efforts to find nursing home beds or community–based care on the outside has so far yielded only about 60 placements, according to the system’s legislative director, Joyce Hayhoe.  To fulfill its health care requirements under a federal court order, the state last year built a 2,950 bed long-term and intermediate care facility in Stockton – the largest in the country – at a cost of $900 million.  According to Hayhoe, the state intentionally did not take Connecticut’s approach because of concerns about community reaction.

Even if California and other states could find enough beds in private nursing homes to care for their elderly and disabled inmates, not all of them would be eligible. Those with recent disciplinary actions, for example, are generally not considered candidates for medical parole. Sex offenders can be difficult to place because of state laws restricting where they can live. A large proportion of elderly inmates are serving lengthy sentences for crimes such as rape or murder. Many will die in prison because communities are unwilling to accept them.

Rocky Hill is no exception. Residents of the town of 20,000, just south of Hartford, protested on the steps of the Connecticut State Capitol, filed a court injunction and lobbied lawmakers to pass a law allowing them to overrule the state’s decision to contract with 60 West.

They were unsuccessful, but so far, there have been no incidents. Two inmates were transferred back to prison because of minor behavioral problems, but no employees have been injured and local residents have not complained.  “We have over a year in the bank now without incident,” said Mike Lawlor, Connecticut’s undersecretary for criminal justice. “The permanent solution is not one nursing home. If the current trend holds there may be more dedicated nursing facilities in the future.”