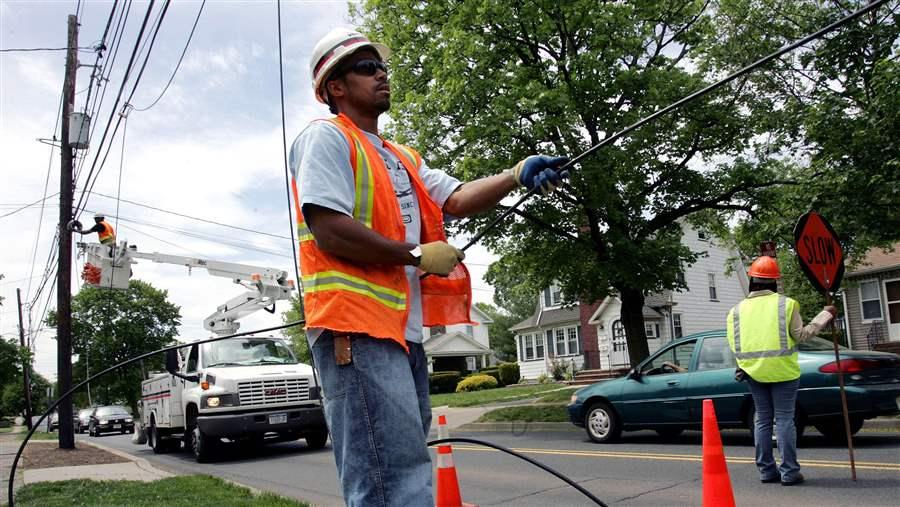 A Verizon employee pulls lengths of fiber-optic line that can simultaneously handle voice, video and data in Somerville, N.J. Many small and rural communities say they have to resort to municipal broadband utilities when private companies won’t provide them with high-speed service. (AP)

NOTE: This story has been updated to reflect the following correction: The U.S. House last month voted 223-200 to block any FCC preemption of state laws limiting broadband.

Wilson, North Carolina, determined nearly a decade ago that high-speed Internet access would be essential to the community’s social and economic health in the 21st century, just as electricity, water and sewers were in the previous 100 years.

But private Internet service providers would not join the city in building a high-speed broadband network, so in 2006 Wilson’s city council voted unanimously to go it alone, borrowing about $35 million to deliver fiber optic cable to homes, schools and businesses via its municipal electric utility.

Today, Wilson is North Carolina’s first “Gigabit City.” Its Greenlight broadband utility serves 7,000 of 50,000 residents with Internet speeds between 20 Mbps, or 20 megabits per second, and 1 Gbps, or 1 gigabit per second. That’s just about the fastest speed around, roughly 20 times faster than what private cable companies typically offer. Only about 10 percent of U.S. homes have access to service that fast.

Many other small communities without high-speed broadband would like to follow Wilson’s lead, but they have run into resistance from state officials who don’t want municipalities competing with private companies that pay taxes. States also fear exposing taxpayers to potential losses if systems should fail.

The core question is whether high-speed Internet access is such an economic necessity that municipal governments in less-populated areas of the country should provide it when private companies won’t.

To advocates of municipal broadband, the answer is clear.

“It’s something we have to have,” said James Baller, a Washington, D.C., lawyer who specializes in municipal broadband issues and heads the Coalition for Local Internet Choice. “The nations that have it will be the ones most successful in the emerging global economy.”

Foes, including private Internet service providers such as Comcast, AT&T and Time Warner Cable, have a different view. They say they are spending hundreds of millions of dollars upgrading infrastructure to give high-speed access to every American, and that government shouldn’t compete against private companies, which must pay taxes and make a profit.

“In general, we don’t think municipalities should compete with private capital when their areas are served (by private providers),” said Sena Fitzmaurice, vice president of government communications for Comcast Corp., the nation’s largest Internet service provider. 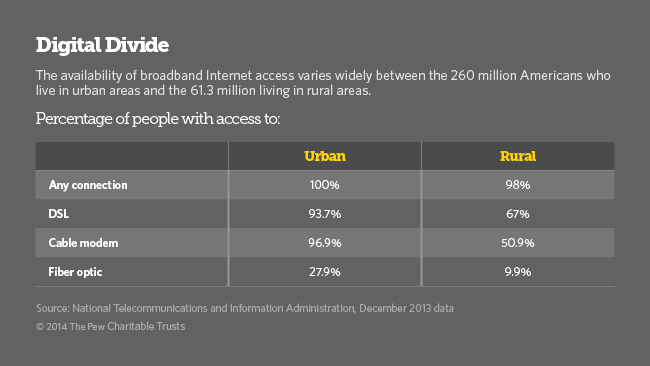 Wilson’s Greenlight broadband utility offers city residents Internet service of 20 Mbps for $34.95 a month and 1 Gbps for $149.95 a month. Greenlight also offers electricity to six surrounding counties, but not Internet, cable TV or phone service, though many residents would like to have it. That’s because the North Carolina legislature in 2011 passed a law that restricts local governments from providing broadband service. Wilson was grandfathered under the law, but prohibited from expanding beyond its home county.

In recent years 20 other states either have prohibited municipal broadband or thrown up hurdles making it more difficult for communities to get into the broadband business.

The North Carolina law, for example, requires a referendum before a municipality can provide service and makes financing difficult. Texas prohibits municipalities and municipal utilities from directly offering it to the public or in partnership with a private provider.

Last month, Wilson petitioned the Federal Communications Commission to preempt the North Carolina law so that Greenlight can expand into neighboring counties. At the same time, Chattanooga officials filed a similar petition asking the FCC to preempt a restrictive Tennessee law.

FCC Chairman Tom Wheeler said in June that such laws hurt consumers and stifle competition, and that he would seek to preempt them. But the states and a majority in the U.S. House disagree. The National Conference of State Legislatures last month sent a letter to the FCC threatening to sue on constitutional grounds if the commission overrode state laws limiting municipal broadband. The U.S. House last month passed legislation 223-200 to block any FCC preemption.

“We don’t need unelected bureaucrats in Washington telling our states what they can and can’t do with respect to protecting their limited taxpayer dollars and private enterprises,” said the House sponsor, Republican Rep. Marsha Blackburn, whose Tennessee district doesn’t include Chattanooga.

The restrictive state laws were passed after lobbying by private providers, often with the backing of libertarian or taxpayer groups such as Americans for Prosperity. They note that some municipal broadband systems have failed, and that taxpayers can be left on the hook when they do.

Often they point to UTOPIA, the decade-old Utah Telecommunications Open Infrastructure Agency, a consortium of 11 Utah cities that planned to hook up businesses and homes with fiber optic cable with speeds up to 1 Gbps.

UTOPIA’s network today is barely half-finished, and it has a negative net worth of at least $120 million, few subscribers and debt taxpayers are obligated to pay An Australian firm, Macquarie, has made an offer to lease, operate and upgrade the network, though the deal would require higher fees and still leave taxpayers with debt. 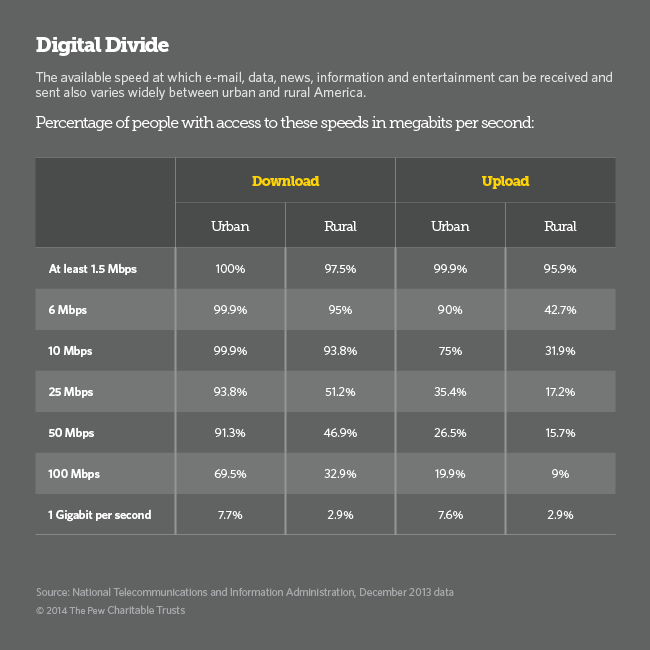 But supporters of municipal broadband point to prominent successes. In addition to Wilson and Chattanooga, about 150 communities have wired every address in town, according to Christopher Mitchell, director of community broadband networks at the Minneapolis-based Institute for Local Self-Reliance, which advocates municipal broadband.

Another 250 communities offer Internet access to either businesses or residents. And about 1,000 wire schools or libraries, but not residences, Mitchell said.

Rural areas are especially unlikely to have access to high-speed systems, according to data from the U.S. Commerce Department’s National Telecommunications and Information Administration. Ninety percent of residents in the nation’s urban areas have access to download speeds of greater than 50 Mbps, while less than half those in rural areas do.

At that speed, users can typically download a book in 0.1 seconds and a movie in 8 minutes. At 100 Mbps, it takes less than a minute to download a movie. Only 9 percent of the people living in rural areas have access to that higher speed.

Communities don’t raise and spend the large sums of money it takes to jump into the broadband business unless they are unserved or underserved by private providers, or are unable to partner with private firms, said Patrick Lucey, a policy program associate at the New America Foundation’s Open Technology Institute.

“This is critical infrastructure for these communities,” he said, “and it’s important for communities to have the local choice to do it.”

Alyssa Clemson of the Utilities Telecom Council and other advocates of municipal cable compare providing broadband in rural America to the need to bring electricity there in the last century. Communities that weren’t served by private electric utilities had to form municipal utilities or rural electric cooperatives.

They all offer fiber cable delivery to homes and businesses at 1 Gbps, she said. While Google is working with Kansas City, Missouri and Kansas to bring fiber optic high-speed service there, a cooperative in central Missouri, Co-Mo, already offers 1 Gbps service for $99.95 a month.

“Broadband is a necessity for economic development, schools, small businesses and to work from home,” Clemson said. “And rural America should have what they need to have – not what someone tells them they should have.”

Many in Wilson, North Carolina, agree. “A fiber network is essential public infrastructure like electricity,” said Will Aycock, Greenlight’s general manager. He calculates the utility’s broadband loans will be paid off in 11 years. “We need it for the economic health and benefit of our citizens.”