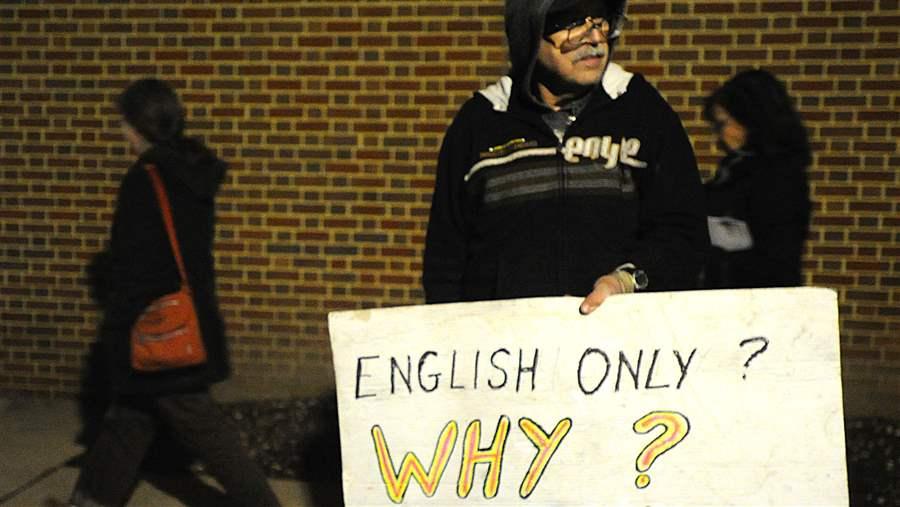 A man protests outside the County Office Building in Westminster, Maryland, where officials considered an English-only ordinance in 2012. Since then, states and cities have taken different approaches to growing populations of non-English speakers.

A growing language divide has opened up across the country, as a sharp increase in the number of Americans who speak English as a second language—or don’t speak it at all—is driving cities and states to respond, often in radically different ways.

In some places, policymakers are enacting or strengthening English-as-official-language laws, barring the translation of certain government documents into any other language. Other places are becoming de facto multilingual societies, with laws and procedures designed to make government more accessible to immigrants who don’t speak English. The result is a patchwork of policies that vary greatly from state to state, or even within states.

To date, 31 states and many counties and localities have adopted English as their official languages. Oklahoma became the most recent state to do so in 2010, and many cities or counties have as well, such as Carroll County, Maryland in 2013. Just this year, five states — Michigan, New Jersey, Pennsylvania, West Virginia and Wisconsin — saw pushes to enact official-English laws, although none passed.

But even where official-English laws are on the books, enforcement varies. In some cases, the measures are being ignored as the population of non-English speakers rises rapidly.

“This growing linguistic diversity, that is just simply a reality,” said Patricia Gándara, a professor of education at the University of California, Los Angeles and the author of a forthcoming book, “The Bilingual Advantage”.

“The reality is that things are changing,” she added. “And this nation is becoming a very multi-language nation.”

A Necessity or a Crutch?

The U.S. is one of the few countries without a national official language, and the debate over official-English laws has been around almost as long as the country itself.  The Obama administration opposes making English the country’s official language, which has stymied movement at the national level since he took office in 2009.

The lack of a federal policy hasn’t stopped cities and states from acting. Some local and state measures have roots going back more than a century, with many tied to previous waves of immigration or historical events. In 1919, for example, Nebraska outlawed the teaching of any modern language other than English to any child who hadn’t yet passed the eighth grade. That law, which reflected the anti-German prejudices of the World War I era, was eventually struck down by the U.S. Supreme Court.

Over the years, circumstances have changed, but many of the arguments have not. Those backing the laws say they preserve cultural cohesion and offer immigrants economic mobility, because learning English is the best way for new immigrants to succeed.

“It’s not about language restriction,” said Karin Davenport of U.S. English, a group that advocates English instruction for immigrants and backs making it the official language. “It’s about a general principle that the role of the government is to teach English, not to be perpetual translator.”

By not requiring English proficiency, Davenport added, “you’re still providing them with that crutch that’s allowing them to remain linguistically isolated.”

Yet demographics and the changing linguistic makeup of America have challenged such beliefs. Nationwide, 20.8 percent of residents, or nearly 61 million people, speak a language other than English at home, the U.S. Census Bureau reported last year. In 2000, that number was just 17.9 percent.

In some cases, population trends have prompted government officials to make changes, regardless of what the law says. California law, for example, designates English as the state’s official language and requires legislators and state officials “to take all steps necessary to ensure that the role of English as the common language of the state is preserved and enhanced.” But the law is largely seen as symbolic, and it doesn’t specifically bar the state from translating documents into other languages. Today, the state offers many documents in languages other than English, including an entire Spanish-language version of the state’s Department of Motor Vehicles website. As UCLA’s Gándara said of the law, “it’s completely irrelevant.”

“The reality is it’s a highly linguistically diverse region,” she added. “If you don't speak Spanish or one of the Asian languages you’re kind of left out of the mainstream.”

Census data supports that line of thinking. Forty-four percent of Californians reported speaking a language other than English at home. In West Virginia, the figure was 2 percent.

That could explain why California has found itself on the leading edge of a debate this year over legislation requiring the translation of patient instructions on prescription bottles. Federal guidelines require pharmacies that receive federal funding to offer some translation services, and some private pharmacies have followed suit to attract more customers.

California would be the second state — after New York — to enact a law requiring the translations on all prescription bottles. Some worry about inaccurate translations or errors in communicating across languages, but those who support the idea see it as a matter of safety and necessity.

“Obviously the number of limited-English-proficient individuals in the United States continues to grow,” said Evan Weibel of Language Scientific, Inc., a company that offers pharmacies translation services. “The need for services like this is something that’s not going to go away.”

Another example occurred this year in Massachusetts, where a concentration of non-native-English speakers in Boston prompted the legislature to allow the city to offer ballots in some precincts in Chinese and Vietnamese. The state has an official-English law on the books, and although the federal Voting Rights Act requires multilingual ballots in some parts of the country, it didn’t there.

The sponsor of the measure, Democratic state Rep. Aaron Michlewitz, represents Boston’s Chinatown neighborhood. He said offering multilingual ballots will be particularly important this fall, since voters will be asked a complicated referendum question on casino gambling.

Despite the country’s changing demographics, official-English laws have proven popular and lasting, not just in so-called “red” states, but also in the more liberal “blue” ones. Democratic-dominated Illinois, for example, adopted an official-English law in the 1960s.

Supporters continue to push states and cities to adopt such measures, and to convince those that have such laws but don’t enforce them to take them more seriously.

In Arizona, an official-English group, ProEnglish, is supporting a community college student who was suspended when she complained that members of her class were speaking Spanish during group work. The group’s executive director, Robert Vandervoort, said the state’s English law should have blocked the suspension, and that the case shows why such laws matter.

Pennsylvania is another state that considered the issue this year. Republican state Rep. Daryl Metcalfe sponsored an official-English measure, although similar ones have failed repeatedly in the past. The legislature will reconvene hearings on Metcalfe’s proposal this fall.

“We can save tax dollars at the same time as promoting the unifying effect of English as the official language of the state,” Metcalfe said. “It gives (immigrants) greater earning power, they assimilate into the culture.”

But Pennsylvania also illustrates the competing trends. Just 200 miles west of Harrisburg, city officials and private groups in Pittsburgh are working to lure immigrants to their city, in part to offset the devastating flight of residents and industry that’s been ongoing there for decades.

Melanie Harrington, president and CEO of the coalition Vibrant Pittsburgh, said the group has gone to great lengths to make the city more welcoming to immigrants. To achieve that goal, it has collaborated with Latino Chamber of Commerce groups, Bhutanese community centers, and even visiting salsa festivals. Vibrant Pittsburgh also has helped a recent wave of immigrants from Southeast Asia to navigate the city’s health care system, courts, and schools.

What’s notable, though, is how much has gotten done absent official policy changes at the state or local level. In its place, Harrington said, has been “community action.”

“Demand generates or causes community organizations, markets, to adjust, and sometimes law and policy catches up to that,” she said. “It’s coming slowly. I think what we have here in Pittsburgh is an opportunity.”

But the forces pushing for accommodation amid increasing diversity could spur a backlash. Amy H. Liu and Anand Edward Sokhey, two political science professors who wrote a paper analyzing state language laws, said interest in such measures spikes when immigration increases or the immigration issue rises to the top of the national agenda, as it has recently.

“I don't think it’s a coincidence that these things are packaged,” said Sokhey, a professor at the University of Colorado, Boulder, referring to a focus on immigration and official-English laws. “You’re probably going to see more of these linguistic battles, if you will, playing out.”

But Liu, a professor at the University of Texas, said increasing immigration also could drive the issue in different ways: More Spanish speakers, for example, might change the terms of the debate entirely.

“Texas is not English-official, and it is de facto bilingual,” Liu said, offering one example.

“You’re going to see an increase in English-official laws.”

“Or,” she added, “you’re going to see a spike in Spanish-official laws.”