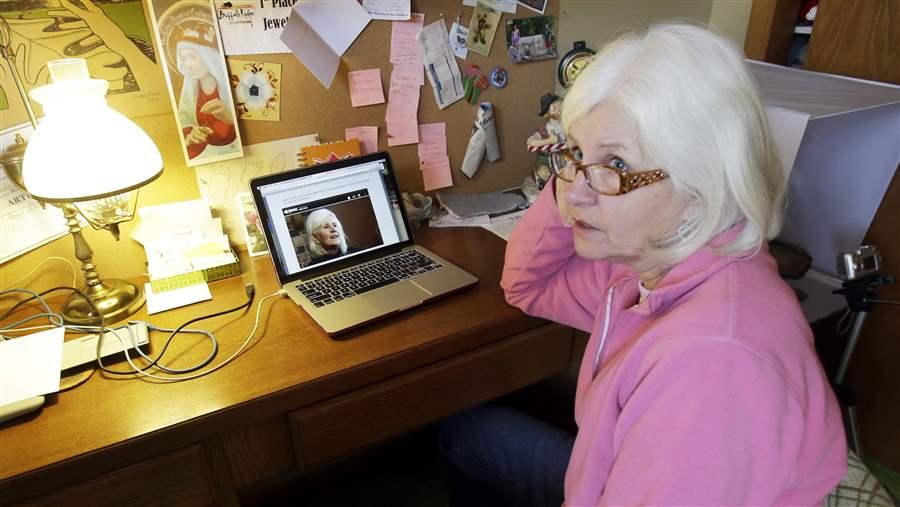 Jean Menden uses a laptop in her home in rural Boyd, Minnesota, where she has ultra-fast broadband that allows her to run an online business. Congress is considering making a ban on state and local taxes on Internet access permanent, or extending the ban and pairing it with controversial online sales tax legislation. (AP)

Americans in most states have paid no taxes on Internet access for 16 years, thanks to a federal law banning states and local governments from collecting such taxes.

Now, with the Internet Tax Freedom Act (ITFA) set to expire on Nov. 1, state and local governments are watching closely to see if Congress will once again extend the tax moratorium, which was first enacted in 1998 and since renewed three times.

Because the law is set to expire just days before the midterm elections, Congress is widely expected to extend the moratorium, at least in the short-term. But exactly what form the extension takes could have a significant impact on state and local revenues for years to come.

Last month, the U.S. House approved a bill that would make the ban permanent and also require the seven states that were grandfathered into the law over the years (Hawaii, New Mexico, North Dakota, Ohio, South Dakota, Texas and Wisconsin) to stop collecting taxes on Internet access. Altogether, the seven states and their local governments stand to lose about $500 million annually in revenues.

But it’s not just the seven grandfathered states that are concerned about the legislation. Increasingly more consumers are shifting from traditional telecommunications such as landline phones and cable television, which many states tax, to Internet-based services, including broadband. That means even states and cities that aren’t currently taxing Internet access worry that a permanent ban, combined with the transition toward broadband, will diminish their tax revenues.

“We are losing taxes as we speak and Congress is not being sensitive to that,” said Larry Jones, assistant executive director of the U.S. Conference of Mayors. “What it does is close the doors for us from being able to get any revenues from anything having to do with broadband

Meanwhile, a bipartisan group in the Senate is pushing a proposal known as the Marketplace and Internet Tax Fairness Act, which would ban Internet access taxes for another 10 years while allowing states to collect sales taxes on Internet sales from out-of-state companies – something that the states have been pushing for years and that, at least in the short-run, would have a much greater impact on revenues. The legislation would allow grandfathered states to keep their status.

The online sales tax could reap $23 billion in revenue for the states. States have long argued that the legislation, which would allow states to require out-of-state retailers to collect sales taxes, would help to level the playing field between online and traditional retailers.

The National Conference of State Legislatures has not taken a position on whether to extend the Internet Tax Freedom Act, but does argue that it should be extended only if Congress also passes online sales tax legislation.

“For those states that are going to lose these monies that they rely on, they should at least be able to collect the revenues they’re already supposed to collect but can’t,” said Max Behlke, manager of state-federal relations for the National Conference of State Legislatures, who said taxes on Internet access are considered nearly recession-proof. “You can’t prevent states from being able to tax something and then not give us anything in return.”

Long a contentious issue, the debate over the online sales tax could overtake any longer-term discussion of renewing or making permanent the ban on Internet access taxes. 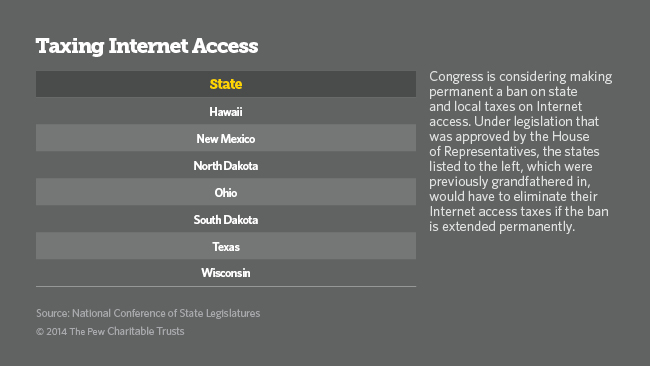 How ITFA Was Born

Those who say the ban should be renewed argue that the Internet has helped to drive economic growth, and that taxing it would impede development and serve as a barrier to more widespread Internet access.

In a statement on the House Floor, U.S. Rep. Bob Goodlatte, (R-Virginia) the sponsor of the Permanent Internet Tax Freedom Act, said that “more than 75 percent of the remarkable productivity growth that increased jobs and income between 1995 and 2007 was due to investment in telecommunications networks technology and the information transported across them.”

Goodlatte argued that the Internet “has become an indispensable gateway to scientific, educational and economic opportunities.”

Most states did not tax Internet access in 1998, when ITFA was enacted, simply because most states don’t levy sales taxes on services, said Michael Mazerov at the Center on Budget and Policy Priorities, who argues that Congress should end the ban and let states and local governments decide whether to levy taxes on Internet access.

Some who want to end the ban argue it does not make sense to continue to treat the Internet as an infant industry in need of special protection.

“When the initial bill was passed back in 1998, we had the understanding that since the Internet was new, it needed time to develop before state and local taxes would be applied to it,” said Jones, of the U.S. Conference of Mayors. “Here we are 16 years later and you still have certain people in the industry who are advocating to provide special treatment for the Internet. We just don’t really think that makes a lot of sense.”

The seven states that now collect taxes on Internet access would feel the most immediate impact of the permanent ban. Of the $500 million, the states collect about $411 million and local governments about $89 million, according to Mazerov.

While those might not sound like huge numbers, the loss of the revenues would create significant budget holes for the states that depend on them.

“It has dire consequences here in the state of South Dakota,” said Republican state Sen. Deb Peters, who chairs the Senate Appropriations Committee. She said that state lawmakers have been following the issue diligently for the past 18 months because the state could lose up to $20 million in revenue annually.

Another state that could lose significant chunk of revenue is Wisconsin, which levies a 5 percent sales tax on Internet access along with a half-percent county tax in some counties. Wisconsin stands to lose about $200 million in state revenue in fiscal year 2016 and nearly $10 million for local governments.

Texas collects a sales tax of 6.25 percent on Internet access, with local sales taxes of up to an additional 2 percent. The first $25 in monthly Internet access charges are exempt from taxes. Altogether, the taxes bring the state $280 million in annual revenues and an additional $78 million to local governments and districts, according to the Texas comptroller’s office.

It’s relatively unusual for the federal government to say what states can or can’t tax.

While most governors aren’t exactly leading the charge for a new tax, the National Governors Association has issued a statement calling the federal prohibition on state taxing authority “contrary to federalism and the sovereign authority of states to structure and manage their own fiscal systems.”

“NGA encourages Congress instead to act to address the disparity between Main Street retailers and online sellers regarding the collection of state and local sales taxes,” the statement said. “Leveling the playing field for all retailers is a priority for governors, consistent with federalism and the best opportunity for states, Congress and the business community to work together.

Peters, of South Dakota, said she and her fellow state lawmakers should get to decide what states tax.

“When Congress starts telling us what we can and can’t tax, as a state legislator that’s my job and not their job.”