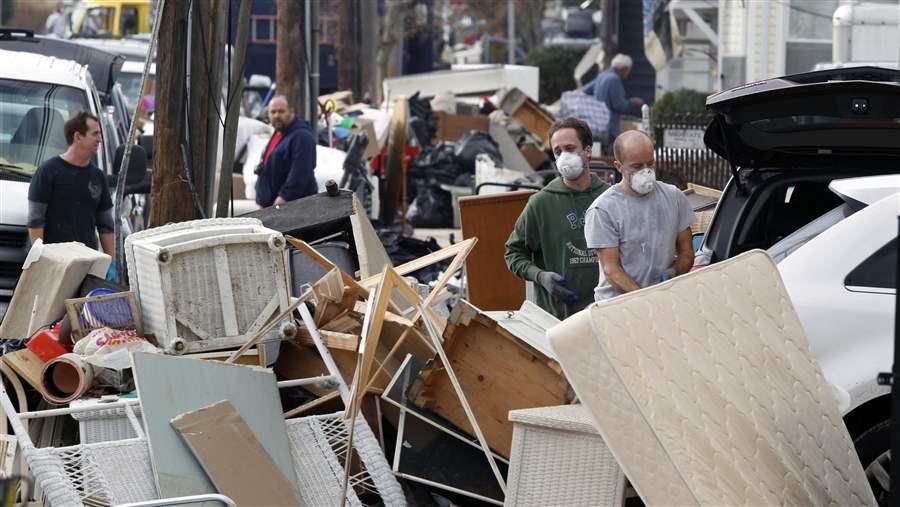 Those were some of the findings of a recent Rutgers University study, which concluded that for years, New Jersey officials did a poor job overseeing state contracts with outside firms.

The review, which examined how New Jersey procured and monitored contracts, determined that oversight failures not only wasted taxpayers’ money but put some of its most vulnerable residents at risk.

“The state engages in oversight by audit and exposé. It’s a ‘gotcha’ way to do it,” said Janice Fine, an associate professor at Rutgers’ School of Management and Labor Relations who co-authored the study. “I was shocked by how little oversight was happening in real time, as opposed to after the fact.”

Many states have struggled to adequately oversee billions of dollars in contracts with companies — both for-profit and not-for-profit. Too often, states rush to tighten contracting laws or regulations only after a public controversy erupts or they’ve been slammed by auditors. By that time, millions of dollars may have been wasted.

“Lots of states are facing this oversight problem,” said Barbara S. Romzek, dean of American University’s School of Public Affairs. “State agencies might write good contracts but they don’t execute them. And contract oversight is important because it’s getting what you pay for. Public money should not be spent poorly. The services should be high quality and taxpayers should be getting their money’s worth.”

States use outside contractors for everything from custodial services to prison health care to massive information technology systems. While officials don’t keep track of how much contracts cost state governments nationwide, it’s estimated to be at least in the hundreds of billions of dollars annually.

State auditors often find that contractors initially bid low to win the business, but later submit “change orders” resulting in higher costs, saying the scope of the project changed. This can add dramatically to the overall price tag, resulting in significant overruns. Auditors sometimes report that change orders were unnecessary or that the work either wasn’t performed or was done poorly. All of it ties into the quality of project management and oversight.

In Oregon, Democratic Gov. John Kitzhaber signed a bill earlier this year that strengthens oversight of information technology contracts after the state’s disastrous attempt to create an online health insurance exchange, which failed. The state paid a private contractor more than $130 million to help develop the website.

In Idaho, lawmakers passed new legislation aimed at improving contract monitoring after their own Office of Performance Evaluation issued a critical report last year. It found that the state’s contract oversight training was inconsistent, and there was no formal framework for monitoring contracts. Each agency followed its own internal policies, with no across-the-board statewide rules.

The legislature also acted because of a public outcry over a multimillion dollar state contract with a company to provide a broadband network connecting high schools that wound up costing taxpayers millions more than anticipated.

“All of this was a wake-up call,” said Idaho Republican state Rep. Maxine Bell, chairman of the House Appropriations Committee. “We found out that we had 831 active contracts in a little state like ours — $3.2 billion worth. We weren’t aware of that type of business going on in the state or the magnitude of it. The state should have been better planning and more training for the people in charge of the monitoring.”

Many experts, such as American University’s Romzek, say the key to good state contracting is having highly competent staffers who have the authority and funding to perform their jobs well.

“If you have people who don’t know how to manage a contract, they could get taken advantage of,” Romzek said. “It’s like trying to renovate your kitchen. If you don’t know anything about plumbing and you have someone come in and say you need to pull out all the plumbing, and you can’t ask educated questions, you may get ripped off.”

Aside from inexperienced staff, other obstacles to quality contracting are poorly designed contracts and unwillingness to pull the plug on a contractor with poor performance, Romzek added.

In New Jersey, Rutgers researchers found that state officials responsible for overseeing contracts often were poorly trained and attrition had drained the ranks of many experienced contract managers.

“We literally went into these offices in charge of billions of dollars in contracts and we’d find one person in a cubicle because there had been so much attrition over time,” said Rutgers’ Fine. “That’s a real problem for the state.”

Another problem, Fine said, was that there was no effort to build the cost of oversight into the process, so agencies didn’t have the resources to do an adequate job. Nor was there any centralized data about contracts because no single agency kept that information. Each had its own method of overseeing contractors.

The study blasted the state for failing to properly monitor the administration of a $710 million Hurricane Sandy recovery and reconstruction program, saying it ended up delaying assistance to some victims for months or improperly denying them grant money. It noted that New Jersey officials terminated a $67.5 million contract with a company that administered recovery funds before it had even expired.

The researchers also criticized the state’s residential community release program for criminals, saying that poor oversight of contractors contributed to deaths and injuries, including that of a Newark woman killed by a man who escaped from a halfway house and a man in a liquor store whose ear was slashed by a woman who escaped from a Trenton facility.

And the report took the state’s developmental disabilities agency to task for failing to adequately manage its contracts, saying it wasn’t able to ensure that services to clients were being delivered as required.

While the Rutgers study was partially funded by the New Jersey AFL-CIO, which has battled with Republican Gov. Chris Christie, Fine said that it didn’t skew the research, which was approved by the university’s internal review board. She noted that the contract oversight problems uncovered were longstanding and occurred during both Democratic and Republican administrations.

Christie’s office did not respond to requests for comment.

Last month, New Jersey Democratic state Sen. Bob Gordon introduced a bill that addresses many of the concerns in the Rutgers report. The measure would mandate real-time evaluation of contractors, require that contractors pay a sliding scale fee for monitoring costs, set up a centralized contract database and create a cadre of specialized managers who would receive intensive continuing education training.

“It just makes no sense to be doing this outsourcing unless we have some mechanism in place to make sure that taxpayers dollars are being spent effectively and that the goals of the contract are being achieved,” said Gordon, who chairs the House Oversight Committee. “There should be a monitoring or evaluation process built into every program so that you can see if it’s working and make a mid-course correction, if possible. In the business world, it’s called quality assurance.”

In many states, auditors and comptrollers are often the ones who end up uncovering problems with how agencies oversee contracts.

In California, for example, the state auditor found in 2012 that the public health department had mismanaged a contract for a childhood injury prevention program and improperly spent millions of dollars to pay administrative costs.

In Texas, the auditor’s office in 2013 concluded that that the state education agency didn’t have an adequate process for monitoring a $462 million contract with a student testing company.

That same year, the Vermont auditor’s office said that lax monitoring of a prison health care contract may have contributed to more than $4.2 million in extra spending.

Kinney Poynter, executive director of the National Association of State Auditors, Comptrollers and Treasurers, said his members routinely uncover oversight problems in state agencies, especially when they deal with big ticket IT and transportation projects.

“We often see overruns through change orders and lowballing. That’s what the auditors find,” Poynter said. “These issues have been around a long, long time and unfortunately they just don’t go away.”

Poynter said the responsibility lies with the state contract managers, who should be doing monitoring from the start. Instead, states rely on auditors, who launch their inquiries after the money already has been spent.

“It’s the old pay and chase model,” he said. “You pay the vendors and then you have to chase them. But afterwards, it’s too late. The best internal controls are those in place up front and continuously enforced.”

Elliott Sclar, an economist and professor of urban planning at Columbia University, agrees that states tend to regulate contracts “ex post facto – after the fact.”

“Often, it’s the auditors who come in and find some abuse,” Sclar said. “And at that point everyone is scrambling around, but you didn’t get what you paid for, and it’s too late.”

Girth said that the process often can be onerous because states know that they could wind up in court, either suing a contractor or being sued by one if they cancel the contract.

“Those barriers are just too high. Even though there are penalty clauses, they don’t execute them because it’s just too much trouble,” she said. “It’s a very real and serious problem.”

Other experts argue that states need to change their approach to oversight altogether.

Phillip J. Cooper, a professor of public administration at Portland State University, said that while he agrees that contract managers should be better trained, he believes that legislatures bear some of the responsibility because they continue to pile on new contracting requirements that place too much burden on contract managers.

The key to improving oversight, Cooper argues, is for states to stop having a “cops and robbers mentality” about contract management.

“We’ve got to get away from this idea that they need to spend all this time making sure contractors don’t steal all the money,” he said. “Instead, it should be about managing ongoing relationships with contractors and making it work.”