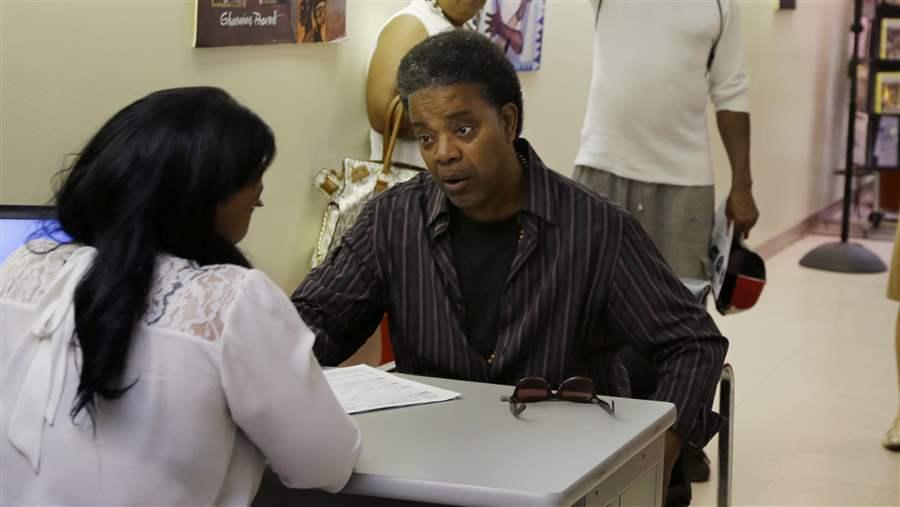 Rachael Richardson, left, helps Louis Peters at a health center in Trenton, N.J., as he fills out papers to sign up for health insurance through the state’s federally-assisted exchange. New Jersey is one of 36 states that has deferred to the federal government to run its exchange. A recent court decision could jeopardize billions in premium subsidies for residents of those states. (AP)

As states ready their health insurance exchanges for a second open enrollment season in November, many have more to worry about than the computer glitches that plagued them last year.

“Until now, it was inconsequential what you were called,” said Larry Levitt, vice president at the Kaiser Family Foundation.  “All of a sudden, it may matter.”

Consumers in the remaining 36 states that use the federal exchange ultimately could be blocked from future premium subsidies if the U.S. Supreme Court sides with Obamacare opponents. At stake is discounted insurance coverage for more than 7 million people and access to federal subsidies amounting to $36 billion in 2016, according to a study by the Urban Institute.

The July 22 decision by the federal court of appeals in Washington, D.C., struck down an Internal Revenue Service rule that authorizes payment of tax subsidies for policy premiums in states that rely on the federal insurance exchange. The court strictly interpreted language in the law that says individuals can apply for tax subsidies at “state” exchanges.

The same day, another federal appeals court in Richmond, Virginia, took the opposite view, ruling that despite the glitch in the drafting of the law, Congress intended that consumers in all states, regardless of the legal status of their exchanges, could receive subsidies. Two other cases on premium subsidies and federal exchanges are pending in federal district courts in Oklahoma and Indiana.

In all of the cases, plaintiffs argue that the ACA refers only to state exchanges, not federal exchanges, in its provision calling for subsidies. Qualifying individuals, the law says, can receive subsidies toward the purchase of health insurance “through an exchange established by the state.” 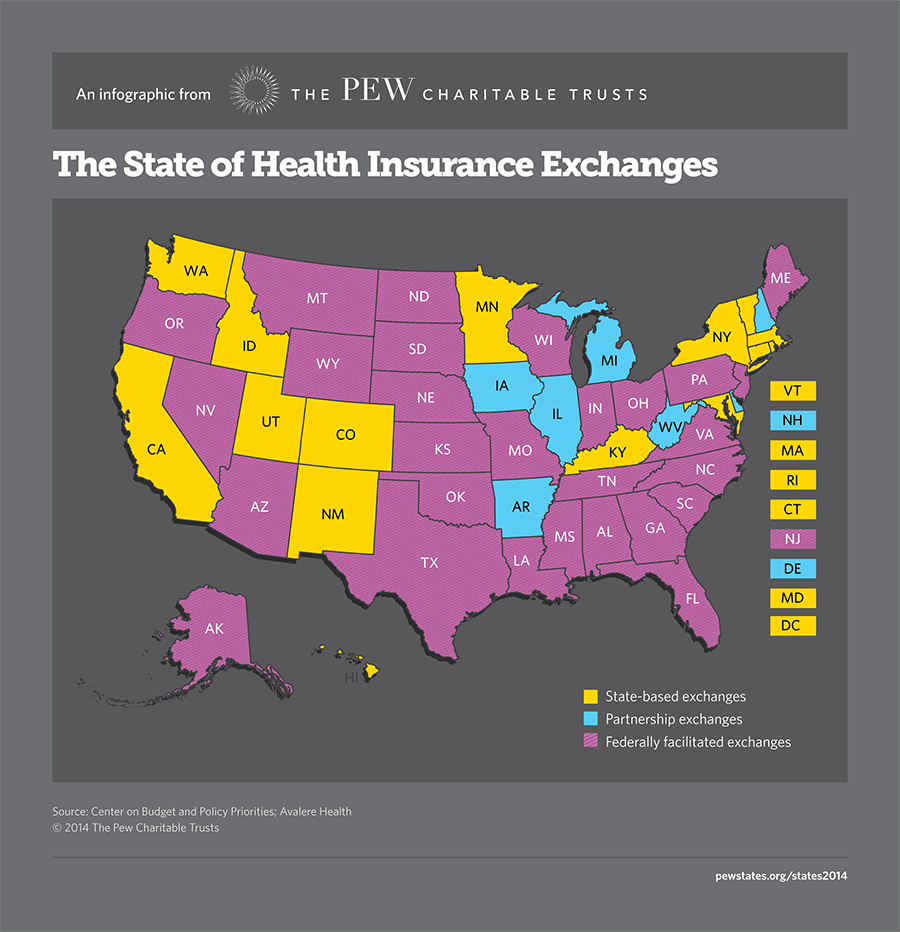 ACA supporters argue there is no evidence that Congress ever intended to exclude consumers who live in states that failed to establish their own exchange and defaulted to using the federal exchange.

Oregon, which secured state exchange credentials in 2011, decided earlier this year to let the federal government take over its day-to-day website operations after experiencing some of the worst technical difficulties in the country last fall. Nevada did the same thing for the same reasons, and Massachusetts is contemplating it as well.

Officials in those states say they plan to take back their sites in the future, while maintaining overall legal authority for them in the meantime. Legal experts agree that the exchanges in all three of those states are technically state-based exchanges.

Opinions differ, however, on whether Idaho and New Mexico, which received state-exchange status from the U.S. Department of Health and Human Services too late to build their own websites, qualify as state exchanges.

The Richmond panel included New Mexico and Idaho in its list of states that ran their own exchanges, but the Halbig decision did not.  Idaho’s exchange group issued a statement saying it will continue to operate its “state-based exchange” for the 2014 open enrollment period. New Mexico exchange officials decided to postpone taking over operation of its exchange until next year’s open season.

The question is when does an exchange legally become a “state” exchange? According to Timothy Jost, a health law professor at Washington and Lee University, it is when state lawmakers or the executive branch appoints a state entity, such as a government agency or nonprofit organization, to run its exchange.

In theory, Jost said, that state entity could then contract with the federal government to use the federal HealthCare.gov insurance marketplace, and it would be considered a state exchange. Under Jost’s definition, New Mexico and Idaho are clearly in the state exchange column since they both named state entities to take charge of their exchanges.

Unflagging political opposition to the ACA over the four years since its enactment has made it difficult for governors who want to establish state exchanges to get their legislatures to agree. That’s why only the District of Columbia and the 14 states, most run by Democratic governors, have been able to set up their own exchanges.

Under the ACA, there is no deadline for states to let the federal government know they want to run their own exchanges. The administration has so far accommodated every request, provided the state had a reasonable plan for running its insurance marketplace. But there is a deadline of mid-November for states to receive additional federal money to complete their exchanges. After that, states are on their own financially.

If the case against the health law is accepted for consideration by the Supreme Court, and many expect it will be, a decision won’t come until 2016. That gives states time to reconsider operating their own exchanges when most legislatures reconvene next year. Premium subsidies to consumers are expected to remain unchanged until that time.

In a gray area are seven states — Arkansas, Delaware, Iowa, Illinois, Michigan, New Hampshire and West Virginia — that have entered a partnership with the federal government to operate their exchanges. For legal purposes, those exchanges are currently considered federal exchanges, although the states do their own marketing and outreach under the partnership.

Arkansas is preparing to ask the federal government for state exchange status, and lawmakers in Illinois are trying to get agreement within the state to do the same thing.

For states that have not established legal authority to run their own exchanges, there is still time.  But if this legislative season is any indicator, there may not be a flood of new applicants anytime soon.

According to a July 20 report from the National Conference of State Legislatures, bills were introduced in Arizona, Georgia, Iowa, Indiana, Maine, New Hampshire, New Jersey, North Carolina, Ohio, Oklahoma, Pennsylvania, Virginia and Wisconsin to change their exchanges from federal to state-administered. No bills became law.

Maine lawmakers passed a bill, but Republican Gov. Paul LePage vetoed it. State exchange bills are pending in New Jersey, Ohio and Pennsylvania, where legislatures are open until the end of the year. For lawmakers on the fence, the prospect of losing millions in federal tax subsidies could make a difference.

“There are a lot of similarities between the exchange decision and the Medicaid expansion,” Kaiser’s Levitt said. “Lawmakers will be under a lot of pressure from providers and insurers in the state to keep the money flowing.”