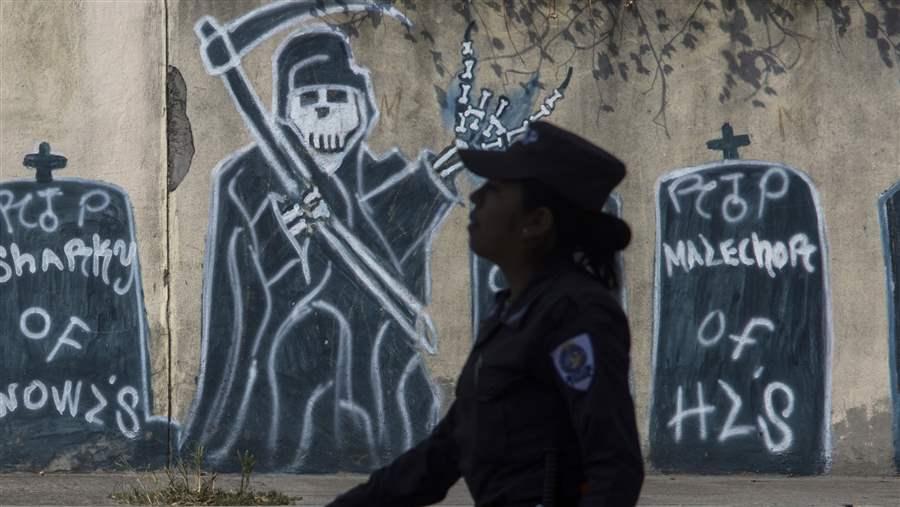 A police officer walks past graffiti depicting gang members who have died in a neighborhood controlled by the Mara Salvatrucha gang in Ilopango, El Salvador. The way U.S. cities and states dealt with such gangs 20 or more years ago may have contributed to the recent surge in Central American kids crossing the U.S.-Mexico border alone. (AP)

Back in El Salvador, a 15-year-old boy is doing what 15-year-old boys everywhere do. He’s hanging out, laughing and joking, when a buddy approaches him with a demand: Give me your cell phone. The teen refuses, not realizing his friend is a member of a local gang that makes a habit out of grabbing phones and using them for extortion. They call it “asking for rent.”

At first, nothing happens. But a week later, the gang strong-arms his girlfriend into luring the teen out of his home. Instead of a date with his sweetheart, the teen is beaten — badly — by the gang. He’s left with a warning: The next time, you won’t walk away with your life.

Terrified, the teen flees the country, running to the U.S. in an arduous and highly dangerous journey — one that 62,000 other Central American kids have made since October. His hope is to be reunited with his father in the Washington, D.C. area.

What the teen, who is now being held in detention, may not understand is that the very gangs he’s fleeing actually got their start decades ago in the U.S.

Critics say the way cities and states dealt with gangs 20 or more years ago greatly contributed to the recent surge in Central American kids crossing the U.S.-Mexico border alone. In the past, cities like Los Angeles dealt with troublesome gang crime by trying to arrest the problem away, conducting massive sweeps and deporting gang members by the thousands back to Central America. Yesterday’s policy has become today’s problem, gang experts say.

“Anybody hanging on the corner, tattoo guys, could be stopped, arrested photographed. But (police) were just squeezing the problem out, not resolving it,” said Luis Rodríguez, a former gang member turned journalist and author of “Always Running: La Vida Loca: Gang Days in L.A.” “The gang problem has sources in poverty, of people being pushed out, social and economic barriers and discrimination. It’s not just a problem of a bunch of bad kids and all that we have to do is punish them.”

These days, some municipalities are trying to change that arrest/deport approach. Los Angeles was the first to attempt to change that paradigm. In 2007, then-Mayor Antonio Villaraigosa set aside $26 million in city, state and federal grants to create the Office of Gang Reduction and Youth Development (GRYD). The program instituted a “Summer Night Lights” program to keep kids off the streets and utilized a battalion of interventionists, many former gang members, to mediate shootings and street wars.

Two years ago, Los Angeles was awarded a $1.5 million federal grant to expand its program nationwide. Other cities and municipalities from Seattle to Montgomery County, Maryland, are experimenting with a variety of social services to prevent gang violence rather than trying to clean up after the fact.

In Northern Virginia, where Central American gangs maintain an intense presence, government officials are trying a different tact: therapy. There, courts contract with the Multicultural Clinical Center, a Springfield private agency of licensed clinical social workers. Clinicians work with children, teens and adults to provide alternatives to gang life. The program is believed to be the first of its kind in the country to use mental health practices as the primary tools to combat gang activity.

Meanwhile, in Montgomery County, Maryland, Luis Cardona, a former gang member from the Bronx, provides culturally specific group therapy sessions for gang members that use elements of hip-hop. At his “healing circles,” warring factions sit across from each other, in tears, as they realize that their sworn enemy has gone through some of the same family trauma as they have, said Cardona, who is the youth violence prevention coordinator with the county’s Department of Health and Human Services.

The vast majority of the Central American kids who’ve crossed the border in the past year, most of whom are under 12, are not gang members, immigration experts said. But they argue that that the same community resources to combat youth violence are vital tools that should be implemented for the migrant children. If they stay in the U.S., immigration experts said, these kids will need all the help they can get to integrate into society.

“Whether we like it or not, those kids will be in our schools; they’re going to be in our community,” said Abel Nuñez, whose agency, the Central American Resource Center (CARECEN) in Washington, D.C., is handling the Salvadoran teen’s case. “They’ll be interacting with multiple institutions, including if nothing is done, the police at some point.”

The unaccompanied minors seeking asylum in the U.S. fall into two categories: those who have the protection of family waiting for them here and those who are truly alone, who, if they are not deported, will likely enter the foster system. Those children are the most vulnerable, experts said.

The exodus of unaccompanied minors isn’t likely to stop any time soon, according to Nuñez. “If you build a 10-foot wall (at the borders), get ready to see 11-foot ladders.” Fleeing to the U.S. is a logical choice for Central American teens who fear gang violence at home, he said.  “Going to the police can actually expedite violence against you.  Because (the gang) will find out; sometimes (the police) work with the gangs,” Nuñez said.

Nuñez emphasized that not all the violence the children are fleeing is gang-related. In El Salvador, for example, 70 percent of all homicides are not directly attributed to gangs, he said. But some local officials in the U.S. say they see a direct correlation between gang activity in Central America and the U.S.

The first Central American crew, the 18th street gang/Barrio 18, was formed back in the 1950s in Los Angeles, when Salvadoran-Americans spun off from a Chicano group. An even more  notorious gang, Mara Salvatrucha, or MS 13, began in the late 1970s and early 1980s when Salvadorans escaping the civil war at home landed in the central Los Angeles neighborhood of Pico-Union.

At that time, Los Angeles was widely considered to be the gang capital of the world. Harassed by Mexican-American and African-American gangs, and culturally isolated, the Salvadoreños decided to form their own.

According to the FBI, over the years MS 13 grew to encompass some 10,000 members across 42 states, from California to Idaho, from Louisiana to Virginia to New York, leaving states and local municipalities scrambling to find ways to combat their proliferation. (It is more difficult to obtain numbers on the breadth of the 18th Street Gang.)

By the early 1990s, many of the home-grown gang-bangers from MS 13 and 18th Street were being deported to El Salvador — a war-torn homeland many hadn’t seen since they were toddlers. Back there, with few opportunities, they re-created the gang life they knew in America.

As they multiplied, they became what the FBI categorizes as a transnational gang, active throughout El Salvador, where there are estimated to be more than 60,000 members, and into Mexico, Guatemala, Honduras, South America, Canada and even Australia.

With heavy tattoos often covering their entire faces, gang members were easy to spot and difficult to integrate into mainstream society. Soon, the gangs had made a name for themselves through murder, extortion, drug and sex trafficking.

“When they went to El Salvador, they exported that culture, that ‘cholo’ culture, the tattoos, the style of clothing, the ‘green lights,’ (hits), the ‘renta,’ (extortion),” said  Rodríguez. “They stayed and started recruiting local kids. That’s what made them big.” And as they grew, so did the violence.

In the U.S., the government’s response to gang activity either happens on the federal level, such as the FBI’s National Gang Task Force, or on the municipal level, with cities and counties organizing to create community-specific programs.

But not everyone is a fan of GRYD. Independent audits found no appreciable reduction in gang violence, while gang experts say the program doesn’t go far enough to enlist the aid of former gang members.

In general, critics of government-sponsored gang prevention programs say that officials focus too much on creating sports programs and don’t work enough at tackling root causes of poverty. One of those critics is Che Serna, a community activist, Anglican priest and current gang member who’s worked to combat youth violence in Chicago.

According to Serna, “politicians think the reason there is violence and people are in gangs is because they’re bored. And if they’re bored, they can go throw a basketball around.” Such an approach, he said, is little more than “window dressing.”

Alex Sanchez, a former member of a Salvadoran-American street gang in Los Angeles — he won’t name the gang because he says he doesn’t want to contribute to the “propaganda”—also thinks that politicians play it too safe. He runs Homies Unidos, a local agency that relies on private funding, where he says, they take a “two-prong approach” to combatting gang violence through “hard-core mediating, reducing rumor controls, being directly engaged when a crisis occurs in the community and being able to provide services for the families.”

In Montgomery County, Maryland, Cardona works closely with other agencies including the police department, the school system and the department of recreation to reduce gang violence and prevent kids from getting into gangs in the first place.

“We’ve been really successful in reducing gang violence,” Cardona said. “Knock on wood, we haven’t had any gang homicides in the past four years,” Cardona said. Officials from El Salvador and Guatemala have come to observe the programs, he said.

In Northern Virginia, both wannabe gangbangers and long-standing members of a crew are usually referred to the Multicultural Clinical Center by a probation officer. This usually happens after they’ve been arrested for gang-related robbery or assault, according to Deepa Patel, the licensed clinical social worker who runs the gang program.

Once he or she is enrolled in the program, treatment can take as long as a year, Patel said, often paid for by Medicaid. Because gangs are often a family affair, with generations of fathers, uncles, sons and brothers contained in one crew, the agency works closely with the family as well, Patel said.

Cardona said localities should do whatever it takes to ensure they have the resources to help the Central American kids who have crossed the border. “We can’t put any Band-Aids on this,” he said.

Read part one of this series, "Far From the Border, Central American Immigrants Find Familiar Faces"