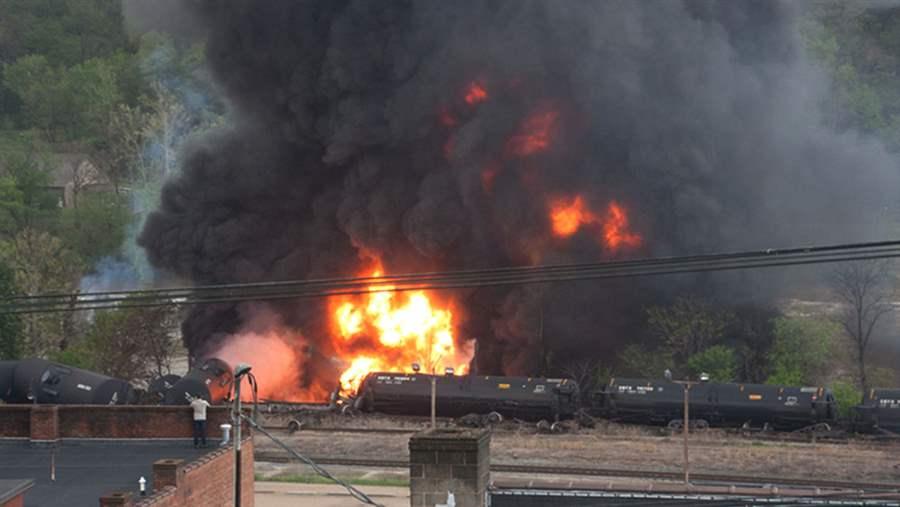 CSX cars carrying crude oil burst into flames after derailing in downtown Lynchburg, Virginia on April 30. Several states have stepped up efforts to prevent and respond to accidents. (AP)

The sharp increase in U.S. oil production and its promise of energy independence is coming with a disastrous byproduct: spills that threaten lives, communities and the environment.

In the past 18 months, about 1.2 million gallons of crude oil produced in the U.S. or Canada has been spilled from train cars and pipelines in at least seven states, sparking explosions, fires, or the evacuation of homes or offices in four instances.

Nobody has to tell the residents of Lynchburg, Virginia about the danger of the millions of gallons of crude oil rolling along rail lines or through pipelines every day. On April 30, more than a dozen train cars filled with crude oil derailed near Lynchburg’s downtown, causing a fire that forced hundreds of people in a 20-block area to evacuate. Nobody was injured, but thousands of gallons of oil spilled into the James River. 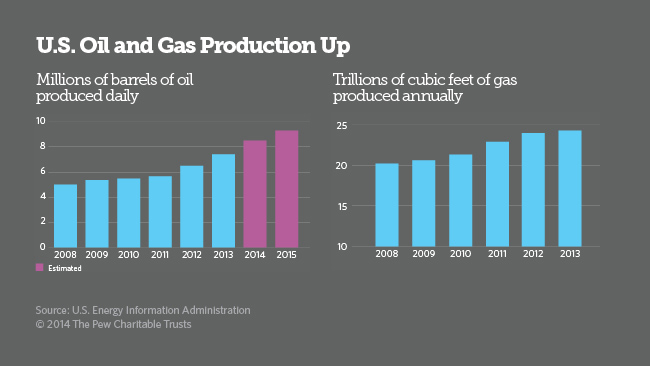 The federal action followed stepped-up efforts by several states to try to prevent spills and respond to disasters:

Nearly all the action in the states was prompted by disasters governors and lawmakers saw in other states or across the border in Canada. Their worst fear is what happened in Lac-Megantic, Quebec, where 47 people were killed last July when an unattended 74-car train derailed. The spilled crude caught fire, then several cars exploded and about half the downtown was destroyed.

“I want to know how much oil will be shipped through my state and how we can be assured the kind of tragedy that happened in Quebec won’t devastate families in our communities,” Inslee said last month in ordering the study in Washington.

Matt Swenson, Dayton’s press secretary, said Minnesotans only needed to look at neighboring North Dakota to see what could happen: Last December, a train carrying grain derailed in front of a mile-long train carrying crude oil near Casselton, not far from the Minnesota border. Twenty cars spilled oil, some exploded. Fire forced evacuation of the town, but nobody was injured. 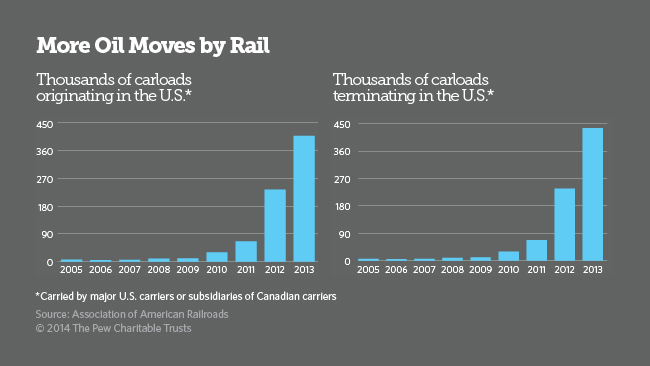 Every day, seven similar oil trains with about 110 cars carrying about 3.3 million gallons of crude travel through Minnesota, the state said. Other states are witnessing similar traffic, and it’s on the rise.

About 264 million gallons of crude oil were shipped by rail through California last year, said Alexia Retallack in the state Fish and Wildlife Department’s Office of Spill Prevention and Response. That’s 46.2 million gallons more than in 2012.

More crude oil is on the move across states as production in North America booms from the fracking of Bakken oil deposits underlying North Dakota, Montana, and Canada’s Saskatchewan and Manitoba provinces, and from the tar sands of Alberta.

Production in the U.S. alone will be 8.5 million barrels a day this year, the U.S. Energy Information Administration estimates. That’s estimated to grow to 9.3 million barrels daily next year. And there aren’t enough pipelines to get the crude to the nation’s 115 refineries to be turned into gasoline and other products.

Republican North Dakota Gov. Jack Dalrymple said last month that pipeline capacity in his state needs to double to about 1.4 million barrels a day by 2016 to carry all the crude produced there. Currently, the state is producing about 220,000 barrels a day more than pipes can carry.

Railroads are picking up the slack, even though the Congressional Research Service said in a May report that it can cost from $5 to $10 more a barrel than pipeline delivery. The number of carloads of crude oil, each carrying about 30,000 gallons, that ended up inside the U.S. rose to 435,560 last year, the Association of American Railroads says. That’s up from about 30,000 in 2010.

In a recent analysis of data from the federal Pipeline and Hazardous Material Safety Administration, the McClatchy News Service found that 1.15 million gallons of crude oil spilled from rail cars in the U.S. last year. That’s more than in all the years combined since the data was first collected nearly four decades ago.

The worst accident was in November in Aliceville, Alabama, where 748,800 gallons spilled from a 90-car train after 12 cars derailed and three exploded. Nobody was injured.

Although widely considered safer than rail shipment of crude, pipelines do spill. A split in a pipeline in March 2013 dumped as much as 5,000 barrels of Canadian tar sands oil into a neighborhood in Mayflower, Arkansas.

Concern over pipeline spills is what drove New Hampshire state Sen. Jeff Woodburn to sponsor the legislation giving his state greater control over pipelines. The source of worry is that the 236-mile Portland-Montreal Pipeline, built to carry conventional crude oil from Maine, through New Hampshire and Vermont to Canadian refineries, can instead be used to ship to the U.S. tar sands oil, which is heavier and dirtier.

A spill, Woodburn, a Democrat, said, could devastate the fragile environment in his northern area of the state, which attracts tourists.

An analysis of federal spill data by the Manhattan Institute for Policy Research last year found that through 2009, pipelines released more oil per spill than rail.  Even with the recent increase in oil transported by rail, pipelines still carry much more. Furthermore, because pipelines often run through isolated areas, it often takes longer to get to the site of a leak and seal it.

But there’s a difference between pipeline spills and rail car spills, said Carl Weimer, a Whatcom County, Washington, commissioner and executive director of the Pipeline Safety Trust that studies and advocates for greater pipeline safety.

Pipelines may spill more oil when an accident happens, Weimer said, but they usually cause mostly environmental damage because they’re located in out-of-the-way places. Railroads travel through populated areas and their spills can endanger more people and cause greater property damage.

“The real question is: Is either one as safe as they need to be?” Weimer said. “I don’t think they are.”

The nature of much of the oil being shipped is heightening states’ concerns. Bakken crude is a lighter, sweeter crude that federal regulators say may be more flammable than other crude – though the American Petroleum Institute that represents the oil and gas industry disputes that.

Bakken crude was involved in the fiery crashes in Virginia, North Dakota, Alabama and in Quebec.

The new proposed federal rules are largely aimed at Bakken crude. Older rail tanker cars will be banned from shipping it across the states within two years unless they’re retrofitted with thicker skins and anti-rollover protection to meet the newest standards.

At present, the freight railroad industry says it uses about 92,000 tank cars to carry flammable liquids, such as crude, and that 18,000 are built to the latest standards.

The Association of American Railroads says the industry already has moved to reduce speeds on oil trains with 20 or more cars carrying crude and include at least one older tank car to no faster than 40 mph in 46 urban areas around the country.

Federal regulators are weighing whether they should go even slower, possibly 40 mph in all areas and 30 mph in urban areas. But the association, which represents major carriers, said going just 30 mph in urban areas could cost it 10 percent of its capacity to ship cargo, and slow down some freight and Amtrak passenger trains traveling across parts of the country.

Railroads also are alerting states when and where trains carrying 1 million gallons or more of Bakken crude will travel in keeping with a May 15 order from the U.S. Department of Transportation. And they’ve said they’ll work with the states and communities on any new spill response efforts just as they have so far.

“We take our responsibility for moving oil in a safe and efficient manner seriously,” the railroad association said. “That is why the rail industry is working with our customers, suppliers and (federal regulators) to find ways to make a safe network even safer.”

That’s what states say they’re doing, too, as they know their citizens need the energy and at a reasonable price.

“We need to move crude oil,” said California’s Retallack. “But we need to do it in a way that doesn’t pose risks to citizens or the environment.”

Or, as Sen. Woodburn of New Hampshire put it: “We want to be accepting to changes and challenges on the energy front – but we want to be in the driver’s seat.”