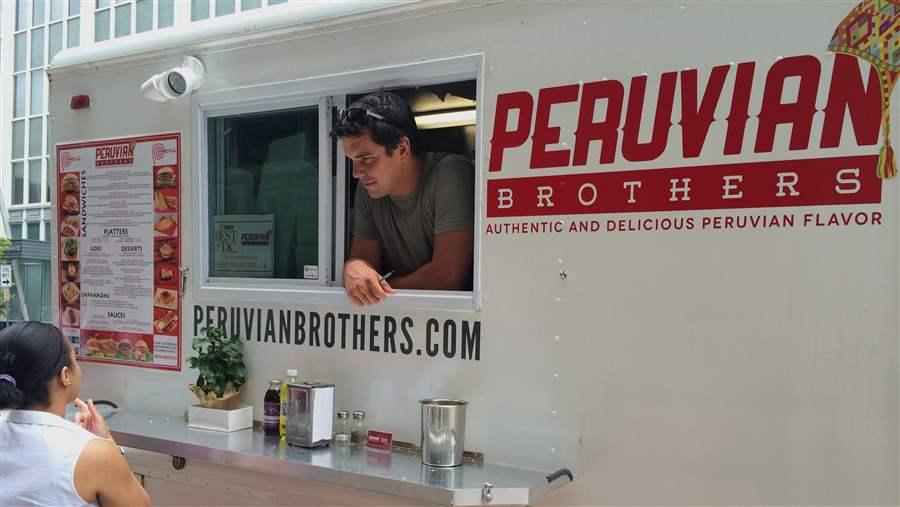 Giuseppe Lanzone talks with a customer at his Peruvian Brothers food truck, which accepts bitcoin for payment. Giuseppe and his brother Mario operate two food trucks in Washington, D.C. About a dozen customers have used bitcoin to pay for their purchases since they began accepting it in December. Giuseppe said bitcoin saves money because credit cards charge 2.75 percent per transaction. (Stateline/Adrienne Lu)

Now that consumers can use digital currencies like bitcoin to buy rugs from Overstock.com, pay for Peruvian pork sandwiches from a food truck in Washington, D.C. and even make donations to political action committees, states are beginning to explore how to regulate the emerging industry.

Digital currencies — also known as virtual currencies or cash for the Internet —allow people to transfer value over the Internet, but are not legal tender. Because they don’t require third-party intermediaries such as credit card companies or PayPal, merchants and consumers can avoid the fees typically associated with traditional payment systems.

Advocates of virtual currencies also say that because personal information is not tied to transactions, digital currencies are less prone to identity theft.

With about $7.8 billion in circulation, bitcoin is the most widely used digital currency; others include Litecoin and Peercoin. All are examples of cryptocurrencies, a subset of digital currencies that rely on cryptography to function.

Many of the headlines generated by bitcoin and other digital currencies to date have focused on problems with the system. In January, for example, federal prosecutors charged the chief executive officer of BitInstant, a major bitcoin exchange company, with laundering digital currency through Silk Road, an online drug marketplace. Mt. Gox, based in Tokyo and once the largest bitcoin exchange in the world, stopped trading in February and filed for bankruptcy protection, saying it had lost half a billion dollars in virtual money.

Although digital currencies are far from widespread in their acceptance, their growing popularity — and potential for misuse — has prompted states to weigh in on what was previously uncharted territory.

“As far as we know, most state laws are completely silent on this topic,” said David J. Cotney, chairman of the Conference of State Bank Supervisors’ Emerging Payments Task Force, which in March began exploring virtual currency.

Among the questions the task force will consider, Cotney said, is whether bitcoins should be classified as currencies, investment securities or commodities, which could determine which regulators should apply.

The idea for bitcoin emerged on a cryptography mailing list in 2009 from someone using the name Satoshi Nakamoto, according to the Bitcoin Foundation, which advocates for the digital currency industry. Consumers can receive bitcoins in exchange for goods or services, purchase them through exchanges, or earn them through “mining,” or spending computer power to process transactions in the bitcoin system in exchange for bitcoins.

Consumers use “wallet” applications on the computer or on a smartphone to send bitcoins to other people. The digital currency can be converted to cash when deposited into special accounts.

The price of a bitcoin, which last week hovered around $600 each, varies with supply and demand.

For consumers, bitcoins allow faster, cheaper and some would argue more secure payments to people around the world, although the volatility of the bitcoins is still a considerable drawback. For merchants, bitcoins add directly to the bottom line because transactions bypass fees charged by credit cards or other services.

So far, many states are looking at digital currencies as payment systems, which means they could fall under states’ money transmission laws that typically cover money transfer services such as PayPal and Western Union, as well as prepaid credit cards. Within about a year, the state banks supervisors’ task force hopes to make recommendations how to deal with digital currency with the hope of promoting consistency among the states.

In April, the task force presented a model consumer guidance to help states provide consumers with information about digital currencies. A number of states, including California, Massachusetts and Texas, have issued warnings to consumers that virtual currencies are not subject to “traditional regulation or monetary policy,” including insurance, bonding and other security measures, and that values can fluctuate dramatically.

At the federal level, the Department of Treasury’s Financial Crimes Enforcement Network (FinCEN) issued a guidance in March clarifying that digital currencies are subject to rules targeting money laundering and that virtual currency exchanges are required to register with FinCEN.

Later that month, the Internal Revenue Services announced that it would treat bitcoins as property, rather than as a currency, for federal taxing purposes. The Government Accountability Office has also recommended that the Consumer Financial Protection Bureau participate in inter-agency working groups addressing virtual currencies.

New York became the first state to propose regulations for the digital currency industry when it unveiled earlier this month a broad-ranging proposal that aims to address consumer protection, money laundering and cybersecurity.

“We have sought to strike an appropriate balance that helps protect consumers and root out illegal activity without stifling beneficial innovation,” said Benjamin M. Lawsky, the New York Superintendent of Financial Services. “Setting up common sense rules of the road is vital to the long-term future of the virtual currency industry, as well as the safety and soundness of customer assets.”

The proposed rules, which could be finalized by the end of the year, would require bitcoin exchanges and companies that receive, store, transmit or issue virtual currencies to obtain “BitLicenses.” Customers and merchants that simply accept bitcoin as payment would not have to obtain licenses.

The rules would also require virtual currency firms to hold as much virtual currency as they owe to customers, hold a bond or trust account in U.S. dollars, provide receipts with every transaction and comply with anti-money laundering provisions, among other requirements.

David Landsman, executive director of the National Money Transmitter Association, a trade association, said the proposed rules were as strict as those for traditional money transmitters, but with added cybersecurity provisions.

“Here in California, we’re interested in being innovative and cutting-edge,” said Democratic Assemblyman Roger Dickinson, who sponsored the legislation, although he acknowledged that the measure was largely a formality since he was not aware of anyone who had been prosecuted under the previous statute. “It didn’t seem to make much sense to have this anachronistic statute on the books.”

California’s Department of Business Oversight, which oversees financial services, has been studying virtual currencies and trying to figure out how to proceed. Spokesman Mark Leyes said some virtual currency businesses have been working with the department to determine whether they would be required to apply for a money-transmitting license under state law.

Other states addressing digital currencies include: