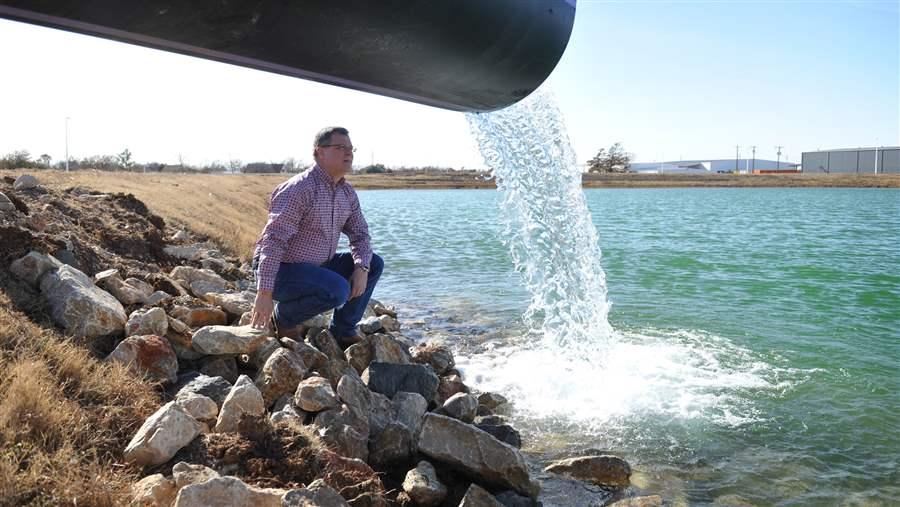 Daniel Nix, utility operations manager for the city of Wichita Falls, Texas, watches the flow of water from the River Road Waste Water Treatment Plant. Wichita Falls is one of an increasing number of cities and states reusing treated wastewater. (AP)

Overwhelmed by severe drought, the Oklahoma legislature passed a law this year to help communities make the most of their water resources by treating and reusing wastewater.

As drought spread over 80 percent of the state, Oklahoma cities expressed interest in reusing water but lacked clear guidance from the Department of Environmental Quality on how to do it. A bill signed by Republican Gov. Mary Fallin at the end of May directs the state agency to design a process for creating water reuse projects and to establish rules and permitting requirements.

“Oklahoma is challenged, not just today but looking down the road,” said state Sen. Rob Standridge, who sponsored the bill along with fellow Republican Rep. Scott Martin. “Water is turning into an extremely important natural resource. It’s hard to envision a plan that doesn’t require some type of reuse.”

Oklahoma is one of many states reusing wastewater to address water shortages. The practice isn’t new — California began reusing wastewater in the early 1900s — but it is increasingly popular as huge swaths of the U.S. struggle with drought.

According to the U.S Drought Monitor, 30 percent of the U.S. was grappling with moderate to extreme drought at the end of June. In California, which is in its third year of drought, river levels are so low that salmon are being trucked upstream instead of swimming their annual migratory route. A recent Government Accountability Office report revealed that 40 out of 50 state water managers expect shortages in their state during the next decade.

In a separate study, GAO reported that 36 states used reclaimed water in 2013, up from 23 states in 2003. Some of the wastewater comes from toilets, but most comes from sinks, showers, washing machines and dishwashers, and it is highly treated so it can be used again.

Flowing through purple pipes so plumbers can distinguish it from other utility lines, recycled water can be used in a variety of ways. Municipalities use it to water golf courses, parks, school yards and road medians, fill lakes and enhance natural wetlands and to fight fires. It can serve as irrigation for crops, commercial nurseries and grazing pastures. Energy producers can substitute it for freshwater in cooling towers and manufacturers can use recycled water throughout the production process. In the Northeast, reclaimed water is sometimes used to make snow at ski resorts.

The main concern about reusing wastewater is the potential effect on environmental or human health. There are limited studies on the subject, but so far there are no documented cases of disease outbreaks from using reclaimed water. The risk from recycling wastewater as drinking water doesn’t appear to be any higher, and in some cases may even be lower, than the risk present in current drinking water systems, according to the Environmental Protection Agency. Even NASA has reduced the need for freshwater in space by turning astronauts’ urine and sweat into clean drinking water.

Nevertheless, water reuse currently accounts for less than 1 percent of total water usage in the U.S., according to the National Academy of Sciences.  The academy concluded that the amount of wastewater that currently isn’t being recycled could be great enough to “play a significant role” in the country’s overall water resource picture. Just along the coasts, an estimated 12 billion gallons of treated wastewater is discharged into the ocean or estuaries each day. That’s equivalent to 27 percent, or more than a quarter, of the public water supply.

While states mull water plans and conservation measures, and in some cases fight among themselves over water resources, some cities are taking the next step and finding ways to quickly supplement their drinking water supplies.

Earlier this month, Wichita Falls, Texas, launched a wastewater-to-drinking water project. The city declared a drought catastrophe in May, a designation so severe that restaurants cannot serve customers water unless they request it. The direct-to-tap project is viewed as the most immediate solution to increasing water supplies for the city.

In California, the San Diego County Water Authority Board recently approved San Diego’s request to build a direct-to-tap system to increase water supplies. San Diego is already spending $1 billion to deliver water to residents through a new desalination plant by 2016, a strategy that is controversial for its high cost and environmental impact. Orange County, about 90 miles north, is spending $142 million to expand its potable reuse program by 2015.

Drinking treated wastewater might have an obvious “eww” factor on the surface, but all water loops continuously through use and reuse, whether it happens naturally through the hydrologic cycle or it is intentionally captured and reused. Even water that is discharged after treatment and not reclaimed finds its way back into drinking water supplies. For example, treated wastewater in Dallas-Fort Worth is discharged into the Trinity River, which feeds Houston’s water supplies downstream.

Delaware has used reclaimed water to irrigate cropland since the 1970s without negatively affecting the environment or crop yields, according to the EPA. In a state where nearly half the land is devoted to agriculture, water reuse relieves some of the demand for water while also helping protect water quality. Last year, 500,000 pounds of nitrogen and 100,000 pounds of phosphorous — nutrients used in fertilizers that are important to crop production but can pose potential harm to environmental and human health — were diverted from lakes, rivers and streams through reuse.

Florida reuses roughly half of its treated wastewater, or 725 million gallons each day, the most of any state. It has been one of the top 10 fastest growing states over the past decade, so maintaining adequate freshwater supplies for development, consumption and tourism is a major challenge. In 2013, reclaimed water in the state was used to irrigate 343,782 residences, 536 golf courses, 948 parks and 358 schools.

Some cities and states are interested in expanding beyond wastewater. Minnesota, for example, is focusing on managing storm water as some portions of the state deal with heavy rains, while others suffer drought. The Minnesota Twins baseball team is reusing storm water that falls onto its field to irrigate and clean the stadium, reducing the team’s use of city water by 50 percent.