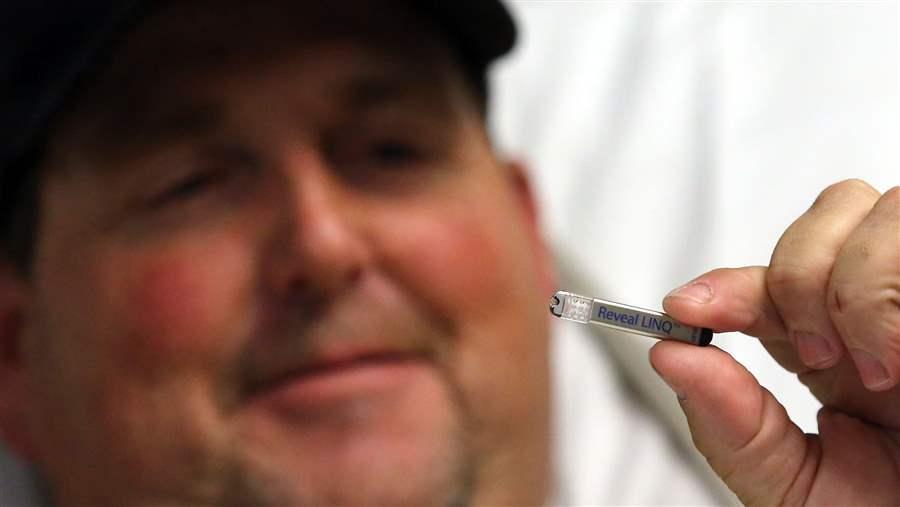 Michael Davis, 56, holds up a cardiac monitor identical to one that was inserted into his chest. The manufacturer of the monitor, Minneapolis-based Medtronic, is merging with an Ireland-based company in a “tax inversion” that will cost Minnesota tax revenue. (AP)

American companies that merge with foreign competitors to lower their federal taxes also cut their state taxes, leaving states to mostly watch helplessly as their tax revenue drains away.

There has been a rash of companies buying up foreign competitors and then moving their “parent” company to the foreign site, a tactic known as “tax inversion.” The maneuver, which has become particularly popular among health care companies, puts pressure on other corporations to follow suit or be left at a competitive disadvantage.

In one recent high-profile “tax inversion,” Medtronic, a venerable Minneapolis-based medical device manufacturer, agreed last month to buy rival medical-device maker Covidien PLC for $42.9 billion. Covidien has its “headquarters” in Massachusetts but is “domiciled” in Ireland, which has some of the lowest corporate tax rates in the world at 12.5 percent. The U.S. corporate income tax rate is 35 percent, the highest in the world.

“When you invert, it makes it easy to strip income out of the U.S. and put it into a tax haven,” said Martin Sullivan, chief economist at Tax Analysts, which provides analysis of tax laws and current events for tax professionals and the business community. “U.S. tax rules treat U.S. income and foreign income differently. When that is the case, the states would almost certainly lose revenue because when income is stripped out of the U.S. federal tax base, it is also being stripped out of the state tax base.”

Minnesota has long been known as a friendly state for medical research companies, according to state Revenue Commissioner Myron Frans, who said the state has a “robust” research and development credit. Still, Frans doesn’t blame the firm for trying to maximize its profits through legal tax maneuvers.

Like most states with a corporate tax income, Minnesota takes the federal corporate taxable income and applies a portion of that to whatever sales the company has in the state. Those sales are known as “apportioned taxable income.”

“That formula doesn’t change much based on tax inversion,” Frans said. “What will change is the number they are being multiplied against, the federal number.” 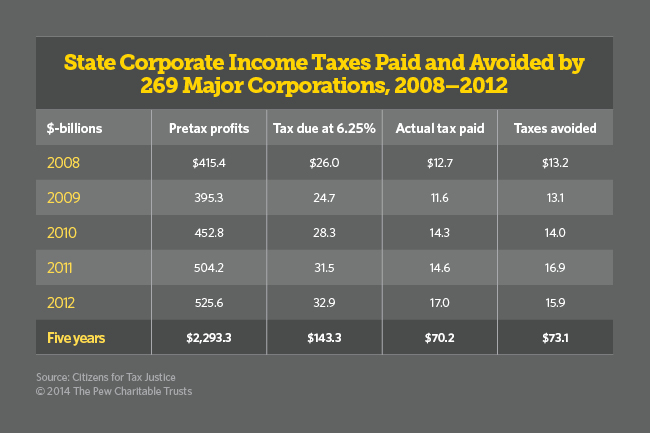 The Minneapolis Star-Tribune estimated Medtronic could save between $3.5 billion and $4.2 billion in taxes on overseas profits through its proposed merger with hospital supplier Covidien PLC.

Nevada, South Dakota and Wyoming do not have a corporate income tax. Ohio, Texas and Washington state have a different kind of business tax like a “gross receipts tax,” which acts the same way.

Medtronic spokesman Fernando Vivanco insisted the inversion was not done for tax purposes, but to “accelerate our ability to innovate more,” and to “become more economically viable to our customers around the world.”

Vivanco said the company will “still continue to pay the same percent in federal and state and local taxes.”  That’s true, but by shifting income outside of the U.S., the company lowers the amount of U.S. earnings and thus, lowers the total U.S. tax bill regardless of the percentage assessed.

Minnesota officials preferred to look on the bright side as well, noting that the company will still provide plenty of high-skilled jobs and pay local property taxes. “No jobs will be lost here due to this transaction,” Democratic Gov. Mark Dayton said. “Company officials also told us that Medtronic intends to create over 1,000 new medical technology related jobs in Minnesota during the next five years.”

While Frans says he understands why Medtronic made the move and is pleased that the company will use some of its profits to invest in the U.S., “it really is a tax avoidance mechanism in the long run. I don’t think that helps anybody.”

Other examples of inversion proposals include:

Tax inversions are just the newest wrinkle in corporate tax avoidance, which has been going on for years in different ways. The Citizens for Tax Justice, a liberal tax study group, reported earlier this year that between 2008 and 2012, some 269 profitable Fortune 500 companies (those that would disclose their taxes) paid state income taxes equal to less than 3.1 percent of their U.S. profits.

Robert McIntyre, director of Citizens for Tax Justice, said the pace of inversions has picked up because as soon as one company does it, others follow suit.

“Once somebody looks like they are getting away with it, the floodgates open,” he said. “If Congress sits on its hands they are a bunch of hypocrites. Patriotism seems to stop at the corporate edge.”

Congress is actually considering broad tax reform measures that would curb the “tax inversions,” though passage of anything that controversial is problematic for the polarized body. Treasury Secretary Jack Lew wrote Congress last week asking for legislation that would restrict the ability of American corporations to move abroad. Lew called for the law to be retroactive to May, which threatens the Medtronic deal.

“What we need as a nation is a new sense of economic patriotism, where we all rise or fall together,” Lew wrote.

For states, there is an additional complication. A few states attempt to  tax  income that is earned overseas , an attempt to recoup some $20 billion states lose annually to all overseas tax gimmicks, including inversions. But most states don’t levy such taxes.

According to Donald Goldman, business professor at the W. P. Carey School, Arizona State University, the pace of the inversions is picking up because investment bankers are advising companies to do it to remain competitive.

Even Walgreens, he said, is considering an inversion with a Swiss company, though that could be problematic for what he called the “most visible direct consumer company.”

“There could be a consumer backlash,” he said. “But in the drug industry, everybody’s doing it or at least exploring doing it.”