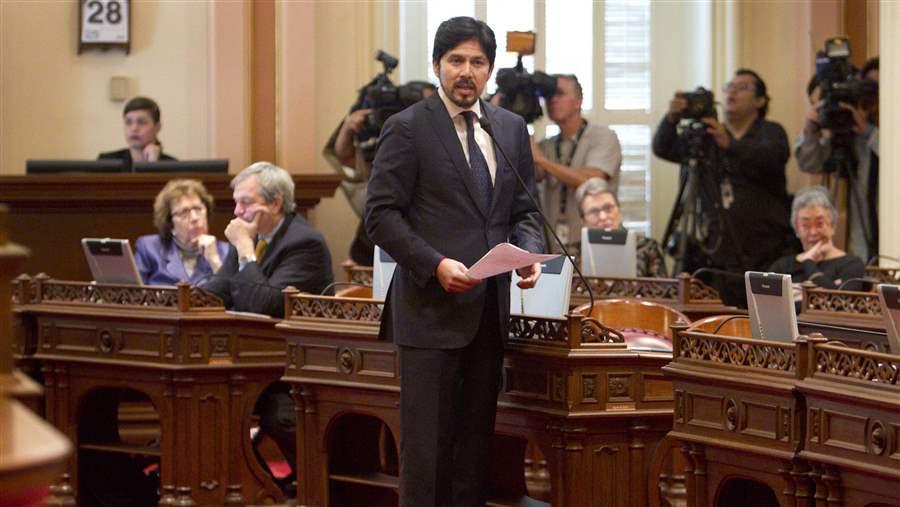 Inspired by his Aunt Francisca, California Senate President Pro Tem Kevin de Leon pushed for a state-sponsored supplemental retirement program for about 6.3 million people who don’t get one through their employers. (AP)

California Senate President Pro Tem Kevin de Leon’s “second mother,” his Aunt Francisca, spent most of her 74-plus years cleaning houses for people who had pensions through their employers or were wealthy enough to set aside money in their own retirement accounts.

Aunt Francisca has neither, only Social Security. At an age when many people retire, she had to keep working until just recently, when she suffered a minor stroke. De Leon now helps support her.

“It’s not a unique story,” de Leon, a Democrat from Los Angeles, said. “It’s the story of tens of millions of Californians and people across America.”

His aunt’s story inspired de Leon to push a state plan to require California businesses that have five or more employees and offer no other retirement plan to deduct 3 percent of their workers’ wages. If the plan takes effect the way he envisions, the money would be deposited in accounts supervised by a state board and invested for the workers’ retirement.

Other states also are wading into the growing retirement crisis, driven by staggering predictions of a nation of poor retirees. Many are exploring ideas for state-sponsored savings plans akin to Individual Retirement Accounts.

In May, the Connecticut legislature set aside $400,000 to lay the groundwork for a plan similar to California’s. That same month, Democratic Maryland Gov. Martin O’Malley set up a task force, headed by former Democratic Lt. Gov. Kathleen Kennedy Townsend, to figure out how to set up a retirement plan.

In April, the Illinois Senate approved a plan, and in the fall an Oregon task force headed by Democratic State Treasurer Ted Wheeler is supposed to issue recommendations on how his state can encourage retirement savings.

Efforts by states to create savings plans for people who don’t have access to a pension or 401(k) plan at work coincide with President Barack Obama’s “myRA,” or my Retirement Account, savings plan that will be rolled out later this year on a pilot basis.

The myRA plan, in which participating businesses would set up an optional payroll deduction for a Roth-style IRA, doesn’t eliminate the need for the states to act, advocates say.

“We have a significant percentage of people whose income will go off the cliff when they retire,” said Democratic Senate Majority Leader Martin Looney of Connecticut, the driving force behind legislation in his state. “We have to see what the state can do.”

The state and its taxpayers, Looney said, have a stake in helping people set aside enough money to live on when they no longer can work. If they don’t have enough, he said, “you will have more people who will become reliant on government assistance.”

Nearly half, 44.3 percent, of baby boomers who are retiring or expect to retire in the next several years are at risk of not having enough money to pay for basic needs such as food, housing and uninsured health costs, according to the nonprofit Employment Benefit Research Institute (EBRI), which closely follows the nation’s retirement situation.

And the crisis extends beyond boomers, who are age 50 to 68, to the following generation, GenXers, who are 34 to 49 years old. Combined, EBRI calculates, the two generations are about $4.3 trillion short of the income they’ll need in retirement, even including Social Security and the equity they have in their houses.

Corporate pensions are evaporating. Seventy-two percent of employees don’t have one, according to EBRI, and people aren’t saving enough on their own. Forty-six percent of workers don’t participate in 401(k) or other savings plans offered them. And, EBRI says, 32 percent of all full-time and part-time workers don’t have access to a workplace retirement plan at all.

About 6.3 million Californians don’t have access to a plan at work. De Leon’s California Secure Choice Retirement Savings Program, signed into law by Democratic Gov. Jerry Brown in 2012 and currently undergoing a feasibility study for implementation, is aimed at them – to provide a little security beyond Social Security.

Employers that have at least five workers and offer no savings plan would have to automatically enroll their workers in the program and deduct 3 percent of their wages. Employees can choose to opt out later. Independent contractors, such as housekeepers, could opt in. Contributions would put in IRA-style accounts and be pooled for investment. Workers could carry their accounts to the next job.

Ideally, there would be no cost to employers or the state. Employers wouldn’t have to administer the program or match contributions. The program would be privately managed with state oversight, similar to the state’s 529 college savings plan to help parents save for college. The pool, estimated at $6 billion its first year at 3 percent per worker, would be conservatively invested to help buffer it from a market crash.

To guarantee beneficiaries a rate of return during times of slow growth, the program would have a reserve fund and be privately insured. The return rate would likely be tied to the 30-year Treasury bill rate.

De Leon acknowledges the program won’t solve all retirees’ woes. But, he said, it can augment the average $1,261-a-month Social Security check California retirees currently get, give them a “modicum of dignity,” and reduce the number who would have to “be subsidized by taxpayers in what’s supposed to be their golden years.”

The plans aren’t without obstacles and opposition.

The federal Employee Retirement Income Security Act, or ERISA, governs pension plans for private-sector workers and sets out strict rules that include fiduciary responsibilities for employers and for operators of plans. State plans would need a Labor Department ruling to exempt employers and the states from ERISA rules that make them financially liable in the case of losses.

De Leon is optimistic California will get a favorable ruling and become the first state to set up a plan. Connecticut, Illinois, Maryland and about a dozen other states are closely watching. But some small employers and the securities and life insurance industries remain wary. They argue ERISA rules pose a big hurdle that the states – and their taxpayers, who would ultimately be on the hook for any liability – aren’t likely to overcome. Congress would have to change the law to allow it, they say.

“We embrace the goal (of states encouraging people to save) 100 percent,” said John Mangan, regional vice president of the American Council of Life Insurers. “But there are obstacles and risks… to state accounts.”

Foes also say the plans aren’t needed. Employers without plans have plenty of options if they want to offer one to their workers. Aside from 401(k) workplace plans, the federal government offers Simple IRAs for employers and the self-employed, although employers must match some contributions. Low- and middle-income tax credits also exist for individuals who put money in IRAs.

But many advocates of state plans aren’t buying the argument. They say current retirement-savings options and the financial industry that markets plans aren’t doing enough – or so many workers wouldn’t have plans and so many Americans wouldn’t be so short of having enough money set aside for retirement.

“They’re not getting the job done,” said Karen Friedman, executive vice president and policy director at the Pension Rights Center, which advocates for great retirement security and backs the state efforts.

Mangan, whose group represents 300 life insurance companies operating in the U.S. and abroad, said the president’s myRA plan should fill the void for workers “better than the state accounts.”

But Friedman of the Pension Rights Center doesn’t agree with that either. The retirement-security crisis is so great, she said, the nation needs both state savings plans and the myRA, which is possible because having one doesn’t preclude the other. If a state doesn’t have a plan, Friedman said, at least some workers will have the president’s myRA.

Nor is De Leon buying it. “There are differences,” he stressed. Importantly, he said, the California plan is mandatory for employers unlike the president’s voluntary myRA, in which companies would have to choose to participate.

In California, the payroll deductions would be automatic unless workers later decide to opt out of the plan. Under myRA, employees would choose to join.

Employees automatically enrolled in savings plans tend to stay enrolled, behavioral economists Shlomo Benartzi of UCLA and Richard Thaler of the University of Chicago wrote in a paper published in September. Only 10 percent of them tend to opt out, they said.

“This is not a voluntary program, it’s mandatory,” de Leon said of the California program. “That’s the game-changer here.”