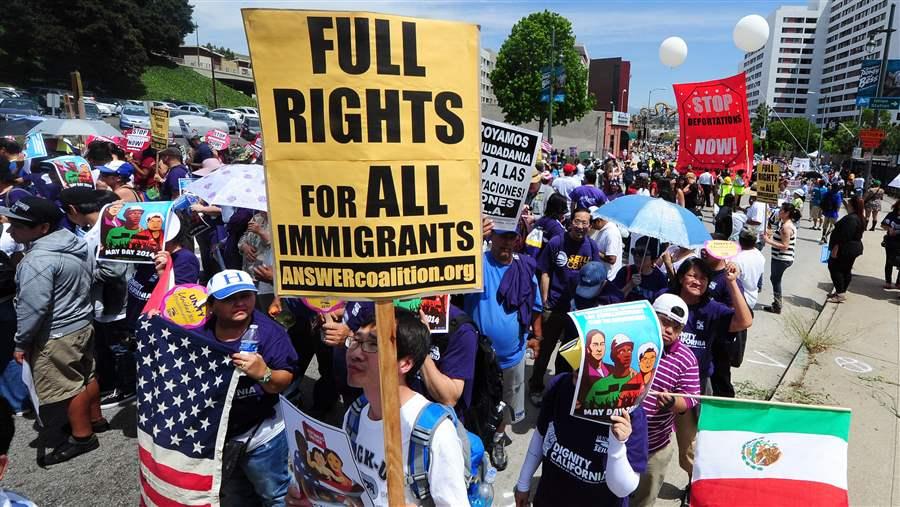 With federal immigration bills stalled on Capitol Hill, many states are charging ahead on their own to open doors to unauthorized immigrants, from allowing them to pay in-state tuition at state colleges and universities, to giving them driver’s licenses and providing them with welfare or Medicaid  benefits.

Sixteen states now offer in-state tuition rates to students who are in the country illegally and at least four other states (Hawaii, Michigan, Oklahoma and Rhode Island) seem to be moving in that direction, according to the National Conference of State Legislatures (NCSL). Unauthorized immigrants can now get driver’s licenses in 11 states and the District of Columbia. Just five years ago, only three states issued the licenses.

Other states are pursuing smaller, yet still significant, measures to make life easier for unauthorized immigrants and draw them out of the shadows. Some of the proposals would allow them to vote in state elections and even run for office, while others are looking to smooth immigration-related problems in foster care programs, for example.

It’s all part of a trend of states moving away from the enforcement-focused immigration laws that took hold after the 2010 elections, most notably in Arizona, which pushed local law enforcement to check the status of people suspected of being in the country illegally. Courts have largely blocked enforcement of the Arizona law.

One measure of the momentum is that some Republicans are getting on board. Florida Gov. Rick Scott, who took a hard line on illegal immigration during his campaign in 2010, signed a bill this year to offer unauthorized students in-state tuition. Last year, Nevada’s Republican Gov. Brian Sandoval signed a driver’s license law, which cleared the Democratic-controlled legislature.

“It seems like it’s becoming more widely accepted across political lines that it makes sense to invest in immigrants who live and work in our communities,” said Tanya Broder of the National Immigration Law Center, an immigrant advocacy group.

"Without federal action states are really focusing in on what is the specific nature of immigration or immigrant integration policy that resonates or that is a priority at home,” she said. Santos is worried, however, that the recent influx of Central American children on the U.S.-Mexico border could reverse the trend. “It does make me concerned that we may see a resurgence of border security proposals,” she said.

Few states have gone as far as Democratic-dominated California in aiding unauthorized immigrants. For example, Democratic Gov. Jerry Brown last year signed a law directing child welfare courts and agency workers not to let a potential guardian’s citizenship status stand in the way of placing a child in the guardian’s care.

“When you do that, and you have a system that’s overburdened, time passes and after a year the child is still in foster care, then you just threw a grenade into the entire family,” Ladew said. “This is getting back to that notion that in the first instance you need to keep the child with that family.”

In 2012, Brown signed another measure designed to keep immigrant families together. Under the Immigrant Family Reunification Act, immigrant parents who have been placed in immigration custody or deported now have an additional six months to meet the requirements of the courts for family reunification. The bill also allows children who cannot be reunited with their parents to be placed under custody of a relative without taking into consideration the relative’s legal status.

For years, many California cities have been “sanctuary cities,” offering assistance and protection to undocumented immigrants. And California is one of four states (New Mexico, Texas and Washington are the others) to offer state financial aid to unauthorized immigrants, in stark contrast to those states where even offering discounted in-state tuition rates paid by all other residents remains a political nonstarter.

Citizens of the State

New York state Sen. Gustavo Rivera, a Democrat from the Bronx, last month introduced what might be the most sweeping state-based immigration measure in the country. Under the New York is Home Act, New York could declare both documented and undocumented immigrants citizens of the state, regardless of federal immigration status.

The measure would make unauthorized immigrants eligible to participate in most aspects of civic life, from voting in state elections and serving on juries to holding public office, earning professional licenses and enrolling in safety-net programs such as Medicaid.

“There has not been a proposal that is this broad and this comprehensive,” Rivera said. “The purpose of this bill is to recognize that there are people who are already contributing.”

While the measure has limits—applicants would have to prove their identity and that they have lived in the state and paid taxes for the previous three years —it has garnered plenty of skeptical and negative headlines. Even Rivera sees a long road ahead before it would become law, although he’s already in contact with interested lawmakers in other states.

“I understand that it is new and out-of-the-box thinking,” he said. “There are a lot of details that would have to be worked out.”

Others see it as simply the latest attempt to whittle away at the distinction between citizens and noncitizens, all but neutering federal immigration policy in the process. Indeed, some see the New York proposal as the culmination of the chipping away at immigration policies that has been underway for years.

“This is usually how these things start,” said Ira Mehlman of the Federation for American Immigration Reform, an organization that supports more border security and limiting illegal immigration. “It is part of this incremental acceptance based on helping people who have violated the law in the first place.”

The problem, he added, is “if you sort of take the position, ‘Well they’re here, so we have to accommodate,’ you’re going to have to keep accommodating.”

The New York move also sets up a potential clash with federal law, although Rivera said his measure is designed to focus only on areas under state control.

Nevertheless, components like allowing unauthorized immigrants to sign up for Medicaid — the joint state-federal health care program for the poor — would surely raise questions about whether federal money is being used to care for people who are in the country illegally under federal law.

Clashes between local governments, states and the federal government have become a defining feature of the immigration debate.

Earlier this month, for example, the Maine Municipal Association filed a lawsuit against Republican Gov. Paul LePage over his order to stop payments from the state’s General Assistance welfare program to unauthorized immigrants.

The LePage administration, citing a 1996 federal law against states offering certain benefits to those immigrants, ordered the state’s cities (which administer the benefits and are reimbursed by the state) to stop paying them.

“We are moving forward and will continue our efforts to align programs with federal rules to ensure that precious taxpayer dollars are used appropriately for those in need and protected for those who are legal residents of Maine and this country,” Department of Health and Human Services Commissioner Mary Mayhew said in a statement announcing the change.

In the meantime, a number of cities are continuing to pay the benefits, even though the LePage administration has raised the stakes, threatening to withhold funding for benefits for anyone on the program, regardless of their immigration status, if cities refuse to remove unauthorized immigrants from their welfare rolls.

The cities say their lawsuit is intended to clarify procedure, leaving aside for now the politics of offering welfare to unauthorized immigrants.

Jerre Bryant, city administrator for Westbrook, Maine, said many of people in question are asylum-seekers who need help.