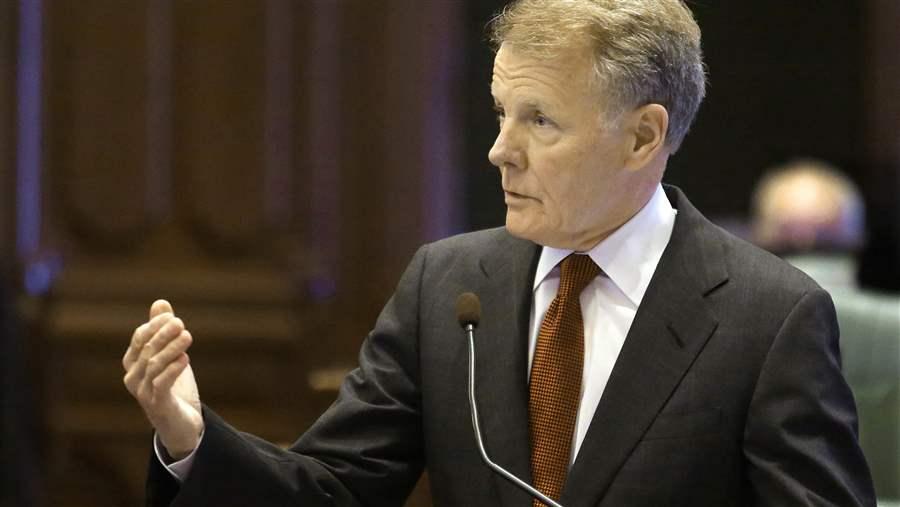 Illinois House Speaker Michael Madigan, a Chicago Democrat, argues in favor of the "Millionaires’ Tax" proposal at the state Capitol. About a dozen states have increased income tax rates on high-income earners since the Great Recession.

When New Jersey Gov. Chris Christie last month vetoed a tax increase on any income over $1 million, no one was surprised.

The Republican vetoed similar tax increases on the wealthy in 2010, 2011 and 2012, arguing that the state’s richest residents would flee to other states, taking much-needed tax revenues and jobs with them.

“I strongly believe that punitively raising taxes on our already overtaxed residents and small business owners is not the answer to the state’s short- and long-term fiscal challenges,” Christie said in his veto message.

Illinois lawmakers also considered a new “millionaires’ tax” this year. A legislative proposal to tax earnings above $1 million at 8 percent, rather than the 5 percent state tax on all other income, failed, but Illinois voters will get to weigh in on a nonbinding referendum in November that asks whether school districts should receive revenue from such a tax.

New Jersey and Illinois aside, about a dozen states have raised taxes on their highest income tax brackets since 2009, believing that raising income taxes on their wealthiest residents would yield enough additional revenues to outweigh any negative side effects. In some cases, the increases were temporary.

Maine voters later repealed the new tax, and in 2010, voters in Washington state also rejected a state income tax on those earning over $200,000.

Though they are often referred to as “millionaires’ taxes,” tax increases on a state’s wealthiest residents—those in the top income bracket—often increase the tax burden on people who earn far less than $1 million annually. For example, Maryland in 2012 adopted a tax increase for singles earning $100,000 or more, and joint filers earning over $150,000. Also that year, California voters approved Proposition 30, which created new tax brackets and income tax rates for those earning over $250,000. Last year, Minnesota adopted a new income tax bracket for joint filers earning over $250,000 a year, boosting their tax rate from 7.85 to 9.85 percent.

Scott Drenkard, an economist at the Tax Foundation, said attempts to add or increase millionaires’ taxes, often seen as a more politically expedient way to raise taxes, have tapered off as the economy has improved. He argues that millionaires’ taxes are not a good long-term strategy because there is evidence that raising taxes on high-income earners hurts productivity and economic growth.

“When you raise your tax rate expecting a certain influx of tax revenue, what you get is less tax revenue than expected because people will respond to what you’ve done,” said Antony Davies, one of the study’s authors. In an extreme case, he said, states could raise tax rates and actually end up with less revenue, although the study did not specifically look at the impact of millionaires’ taxes on state revenues.

But the study by Davies and John Pulito of the Mercatus Center at George Mason University also found that property tax rates have a much stronger effect on migration than income taxes.

Others argue that taxes have little impact on where people decide to live. A study released in May by Michael Mazerov at the Center on Budget and Policy Priorities said job opportunities are the key driver of interstate moves. Other important considerations include cost of housing, physical and cultural environment and proximity to family and friends, the study said.

Mazerov pointed to North Carolina, which has among the highest income taxes of the Sun Belt states, yet saw a large number of people migrating in from other states.

“No state has ever lost revenue by raising taxes on rich people,” Mazerov said. “There might be a small amount of induced migration but we have very powerful research now from New Jersey and California and Montana showing that raising taxes on millionaires does not lead to a significant uptick in the number of people who leave. On balance, the states raise a lot of revenue.”

Among those who have studied New Jersey and California’s millionaires’ taxes in the greatest detail are Charles Varner and Cristobal Young of Stanford.

Based on tax records in New Jersey from 2000 to 2007, Varner and Young concluded that the 2004 tax increase on those earning over $500,000 annually from 6.37 to 8.97 percent had a minimal effect on these taxpayers leaving the state. They estimated about 80 of the roughly 40,000 people who earned over $500,000 in a year may have left as a result of the tax increase, although it had a greater effect on those who are of retirement age or earn their income from investments.

Varner said New Jersey was a particularly good test case because the tax increase there was large compared to those in other states which have passed similar taxes and because many New Jersey residents can move to neighboring states, including New York, Pennsylvania and Connecticut – relatively easily, without changing where they work.

In New Jersey and California, Varner and Young found that many of those who pay the highest tax rates are experiencing temporary increases in their incomes, meaning people might pay the highest taxes for only a year or two under the millionaires’ tax.

In California, a tax on income above $1 million introduced in 2005 to pay for mental health services was actually associated with a decrease in the number of millionaires leaving the state, the researchers said. The study found that high-income earners who got divorced tended to leave the state at higher rates for two years following the divorce, having a much greater impact on outmigration than the tax policy changes studied.

In Illinois, where a flat personal income tax rate is guaranteed by the state constitution, the proposal to tax earnings above $1 million at 8 percent would have required a constitutional amendment. It was one of a number of ideas pitched this year to implement a progressive income tax, after the state increased income taxes in 2011 from 3 percent to 5 percent for all individuals, the largest income tax increase in state history. That tax increase is set to expire in January, halfway through the current fiscal year.

David Lloyd, director of the Fiscal Policy Center at Voices for Illinois Children, which supported amending the constitution to allow for different income tax rates, said that while it will be difficult to change the constitution, he is optimistic it can be done.

“We certainly hope that this keeps the conversation alive and that in the future, Illinois can really change from being an anomaly, one of the few states with a flat income tax, to one of the vast majority of states that have a fair tax where different rates apply to different rates of income.” Thirty-three states have a graduated tax system based on income, 10 states have a flat income tax rate and seven do not tax income, according to the Tax Foundation.

Ben VanMetre, a senior budget and tax policy analyst with the Illinois Policy Institute, said those who advocated against the millionaires’ tax successfully argued that imposing this tax on small businesses – which often file taxes through the individual income tax – would send the wrong message to the business community.

In New Jersey, what has become a perennial debate took on even greater urgency this year when lower-than-expected revenues resulted in a $2.8 billion two-year budget gap. Gordon MacInnes, president of the left-leaning think tank New Jersey Policy Perspective, said that a millionaires’ tax made sense given the state’s cash shortage and unfunded obligations, including public employee pensions.

Only the top 5 percent to 10 percent of taxpayers have increased their incomes since the recession, MacInnes said. Those in the 95th percentile of income earners in New Jersey have incomes above $241,000.

“Yes, taxing them does not address the full problem and it is not a permanent solution, (but) it is a first step to saying we’re going to do better at meeting our financial obligations,” MacInnes said.