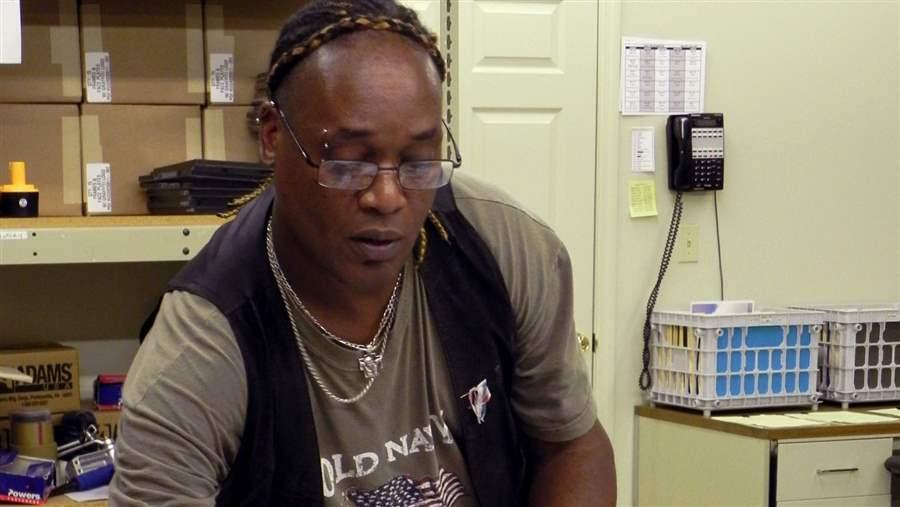 Preston Rankins sorts ads at an advertising firm in Nashville, Tennessee. He got the job through the Park Center, a community mental health cnter that uses a “supportive employment” model to help participants find and retain jobs. (AP)

By his own admission, for many years Cyrus Napolitano’s mental illness—bipolar disorder—did not make him an ideal employee. Perhaps the worst moment came when he walked into the Brooklyn McDonald’s he was managing to discover some now-forgotten worker infractions.

“Whatever it was,” he said last week, “it triggered an explosion where I was screaming at the top of my lungs and beating a path of destruction all the way to the back, knocking everything off shelves and kicking the back door with my boot.”

He left the job at McDonald’s, as he did various other jobs over the decades—as a waiter, a bartender, a concierge at a luxury condo building. During one eight-year period in the 2000s, after his third suicide attempt, he could barely work at all.

But that was some time ago. Thanks to his eventual involvement with Fountain House, a community mental health center in Manhattan, Napolitano, now 53, is in his fourth year of steady, part-time employment as the “scanning clerk” at an international law firm, a stress-free job he credits with helping him manage his illness.

“For me, it goes back to stability, structure, support and acceptance,” he said.

Because of poor funding from state and other sources, the “supportive employment” that benefited Napolitano is unavailable to most of those with serious mental illness. According to one study, only 1.7 percent of those served by state mental health systems received supported employment services in 2012, even though it has proven to be the most effective way to keep the mentally ill in steady jobs.

Soon that situation may change. Under the Affordable Care Act (ACA), states can apply to use Medicaid funds to train and employ the seriously mentally ill, under the theory that steady employment is a form of treatment.

The unemployment rate in that group is strikingly high, about 80 percent in 2012 among those receiving state mental health services, according to the federal Substance Abuse and Mental Health Services Administration (SAMHSA). The range among the states is broad. Maine, West Virginia, Hawaii, Pennsylvania and California all had unemployment rates for the mentally ill above 90 percent. Wyoming had the lowest rate at 56 percent.

Sita Diehl, director of state policy and advocacy at the National Alliance on Mental Illness, which hosted a presentation with an accompanying report in Washington last week to highlight the issue, said the variation among the states is less a reflection of policy differences than the overall condition of the economy in each state. The reality, she said, is that programs to help the mentally ill obtain and maintain employment are so scarce they wouldn’t register significantly in unemployment statistics.

Surveys have shown that as many as seven out of 10 people with severe mental illness would like to work. Robert Drake, a Dartmouth psychiatrist who develops and evaluates community mental health programs, said the benefits of work for the mentally ill are multiple.

“First of all, of course, it provides them with money,” Drake said. “It makes them feel better about themselves. It integrates them more into their communities. And often, they do better in managing their illnesses.”

Drake said the old “step-wise” models for helping the mentally ill obtain and retain employment often failed. In these programs, people would train in some sort of sheltered job program and then, if deemed ready, released to the market to find jobs. Mostly, Drake said, it didn’t work.

Under the supportive employment model, an employment specialist is part of the patient’s mental health team. The specialist, who may have a degree in vocational rehabilitation counseling, social work, psychology, counseling or divinity, helps plot a job-seeking strategy with the patient. Then the specialist remains involved once the patient has a job to help with any problems that arise.

“There have been 21 randomized controlled trials run on supportive employment models,” Drake said.  “Every one shows that under this model, the majority of these people will succeed in competitive employment.”

Drake’s Dartmouth Psychiatric Research Center developed one of the most successful supported employment models, called Individual Placement and Support (IPS). With seed money from Johnson & Johnson, Dartmouth began handing out grants to fund IPS programs in 2001. The grants went to 16 states or jurisdictions and ultimately helped fund 191 sites that follow the IPS method. According to Johnson & Johnson, the programs now serve more than 11,000 people a year and have achieved an employment rate of 40 percent.

“Without question, [it is] the most effective supportive employment model out there,” according to Kandy Ferree, a consultant in Johnson & Johnson’s charitable arm who heads up the mental health portfolio.

Most of the programs, however, rely on private fundraising and limited state funding, often by way of federal mental health block grants. Money, program administrators say, is always an issue. “Funding is always a problem and continues to be a problem,” said Kenn Dudek, president of Fountain House. He said he gets a third of his budget from city and state sources. The rest he has to raise privately.

Dudek said Medicaid has traditionally been of little help because that money had to be used for health purposes, and not for education or training. Furthermore, the paperwork involved in taking Medicaid money was too onerous to be worthwhile.

Wisconsin and Iowa are First

Earlier this year, however, the Obama administration, acting on a provision in the ACA, completed the writing of new rules that will enable states to apply for federal waivers to more easily use Medicaid funds for supportive employment programs. So far, Drake said, Wisconsin and Iowa have received waivers.

Not all supportive employment models follow the Dartmouth IPS model, but all of them share certain attributes. The most important is there is an employment specialist charged with supporting patients in their job searches and for many months after they start working.

The support is as varied as the clientele. Some patients need help strategizing on the kind of jobs that would interest them and how to prepare for the interview. Sometimes, a patient’s illness influences the job choices. Those with high levels of anxiety, for example, may be better suited for jobs where there is little interaction with other people. Others are more likely to benefit from human contact.

Some patients may need the counselor to accompany them on the interview. Some may need assistance to arrive at the job on time, or organizational help so they can perform once they are there.

In the most effective models, the job counselor is part of the mental health team that is assisting the patent.

Integrating the job counselor into the team is crucial, Drake said.  Some patients may need higher dosages of medication to control anxiety when they start a new job. Others, like Cyrus Napolitano, may require lower dosages to wake up in time for a job and to stay focused while there.

Kathy Rohr, clinical director of the Family and Children’s Center in La Crosse County, Wisconsin, which NAMI named a model IPS program, said she frequently sees patients improve thanks to the jobs they hold.

“I’m working with someone who suffers from significant anxiety who had trouble getting out of house at all,” she said. “We helped get him  a job that didn’t put him around too many other people and with his own space. Now he’s been inspired to get out on his own to go to the grocery store. That’s a huge step for him.”

Stephanie Joseph, 50, from Germantown, Maryland, has severe depression and a bipolar disorder. She said her supported employment specialist, from Cornerstone, a community-based center in Montgomery County, accompanied her every moment of her first week of work as an office administrator to help her get acclimated. Nearly a year into the job, she continues to meet with him every week to review the previous week and to set goals for the one coming.

Joseph said her life has turned around.  A certified public accountant, she was fired from numerous jobs over the years for not showing up for work when she was too depressed to get out of bed. Eventually she didn’t work at all.

“I was floundering for probably eight or nine years,” she said. “Basically, all I did was sleep. Now, I get up, I go to work, I have social interaction. I have a sense of accomplishment.”