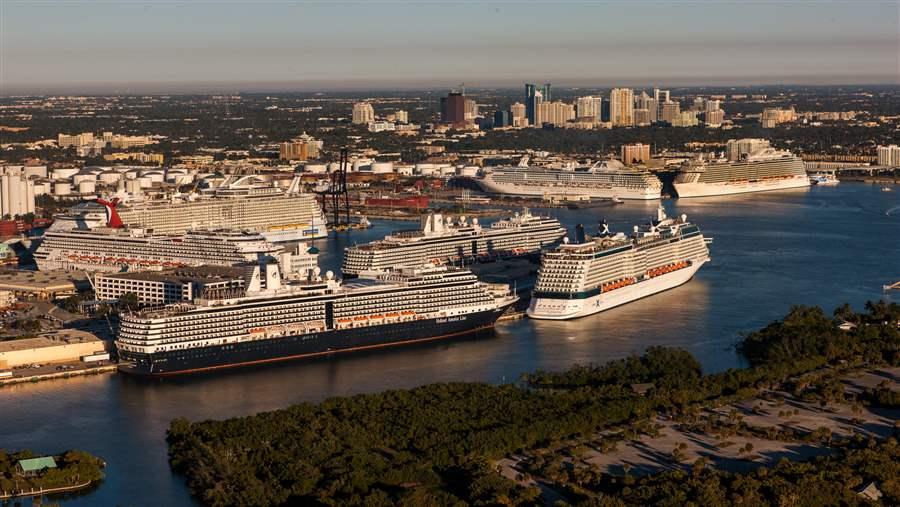 The 15 major Florida commercial ports usually compete with each other for business. What drew them together was a shared mission to force a gridlocked and polarized Congress to shake loose about $2 billion in federal money.

Florida transportation officials, port supervisors, state lawmakers and business leaders staged a “fly-in” to D.C. in the fall of 2013 and again this spring to convince federal lawmakers to approve a $12.3 billion measure to boost U.S. ports and waterways, which includes the $2 billion for Florida.

“It was the first time everybody had joined together for this kind of effort,” said Jennifer Davis, vice president of public affairs at the Florida Ports Council. “Each port has its own projects and priorities. This bill was a great example of everyone working together.”

The 2011 ban on “earmarks,” or the inclusion of money for specific local projects in broader bills, has prompted a shift away from states paying Washington-based lobbyists to advocate for them. Now, more state lawmakers and other state officials are combining forces to advocate for themselves.

Washington lobbyists were specialists in getting earmarks because of their personal connections to lawmakers. The state coalitions are making broader arguments for funds that benefit more than one individual project.

“Never underestimate the power of a one-on-one meeting with your elected officials, especially a meeting in Washington, D.C.,” Bullock said. “Issues just like the Highway Trust Fund directly impact states and have ramifications to states’ infrastructure and economies.”

Florida officials credit just that kind of face-to-face meeting with helping them navigate the ports issue.

Historically, Congress has renewed the Water Resources Reform and Development Act, first approved in its current form in the mid-1970s, every two years. But when the Florida ports launched their effort, Congress hadn’t done so since 2007.

Specific port projects required the Army Corps of Engineers’ approval to be included in the bill, and two in Florida, the Port Everglades and Jacksonville, weren’t in early versions of the legislation at all. The state also needed the money to deepen the Port of Miami, as well as projects in Tampa and all the other ports.

A major hurdle for the Florida group was persuading Congress that getting action for individual ports was not the dreaded earmarks. Earmarks generally were slipped into legislation at the last minute—usually by a legislator directing money to his home state for a very specific purpose. The Florida ports argued that while the items pertained to specific ports, they would benefit Florida communities more broadly — “an economic benefit to the community and the state,” as Davis put it.

The lobbying seemed to help, as the House approved the water bill last fall and the Senate in the spring, with final approval in May. The president signed the bill June 10.

Sarah Bryner, research director at the Center for Responsive Politics, which tracks lobbying and influence, noted a significant decline in paid lobbyists representing “civil service and public officials,” the category that includes state agencies and representatives. There were 1,181 lobbyists in that category in 2010, but only 963 in 2013.

The amount spent on such lobbyists also declined from $94.6 million in 2010 to $71.5 million in 2013, the center found.  While the category is not confined to state officials, Bryner said the significant drop-off after the earmarks ban shows that states are directing their resources elsewhere.

“That particular subset of lobbying clients has declined more than the overall trend,” she said. “It declined pretty transparently after the earmark ban. If you are a governor and you go to D.C. to lobby, that doesn’t show up here. Any lobbyist they hire (does).”

The earmark ban even has paid lobbyists changing their strategy, focusing on influencing economic development policy instead of appropriations, according to Michael Gessel, a D.C. lobbyist for the Dayton Development Coalition, a public-private partnership which lobbies for the Ohio area where the Wright-Patterson Air Force Base is located.

“We very rarely push for congressional appropriations,” Gessel said “The earmark ban is there so we don’t try. Our major push is policy changes in regulations that will assist the region.”

Included in his territory is an Air Force research laboratory at Wright-Patterson Air Force Base that was having problems hiring engineers, who could make more money and be hired more quickly in the private sector. That was because an extensive job screening at the lab could take six months, Gessell said. “It was a slow and cumbersome process.” he said.

The coalition pushed hard for waivers of the scrutiny, in certain cases, particularly with engineers holding advanced degrees. The final version of the 2014 defense authorization bill allowed for the exceptions.

Not all personal appeals from states and localities are successful.

Tennessee Senate Majority Leader Mark Norris, a Republican, heads the Council of State Governments, a group that represents all three branches of government in the 50 states. Lobbyists for the council make personal visits to Washington frequently to meet with lawmakers and executive branch officials, sometimes just to establish a personal connection.  For example, Norris said his meeting with Secretary of Labor Thomas Perez resulted in the secretary coming to Tennessee next week to discuss workforce issues.

But other scheduled meetings with Congress late last year by a CSG group urging more cooperation between the states and federal government didn’t go so well, according to Norris. Senate Majority Leader Harry Reid, a Nevada Democrat, canceled. Then-House Majority Leader Eric Cantor, a Virginia Republican, skipped the meeting and shortened it from 30 minutes to 5 because he needed the room to meet with others. But the White House was friendlier.

“I’m a Republican, but at the White House they not only kept our appointment, it went from 30 minutes to 60 with David Agnew (White House director of intergovernmental affairs),” Norris said.

“We were appreciative of that, but pretty much disgusted with the attitude of the congressmen we were supposed to meet,” Norris said. “A number of congressmen and women really don’t get it. They sort of treat the state legislators just like any other ‘interest group’ and they really don’t behave as though we are co-trustees of the federal system, not something incidental to it.”