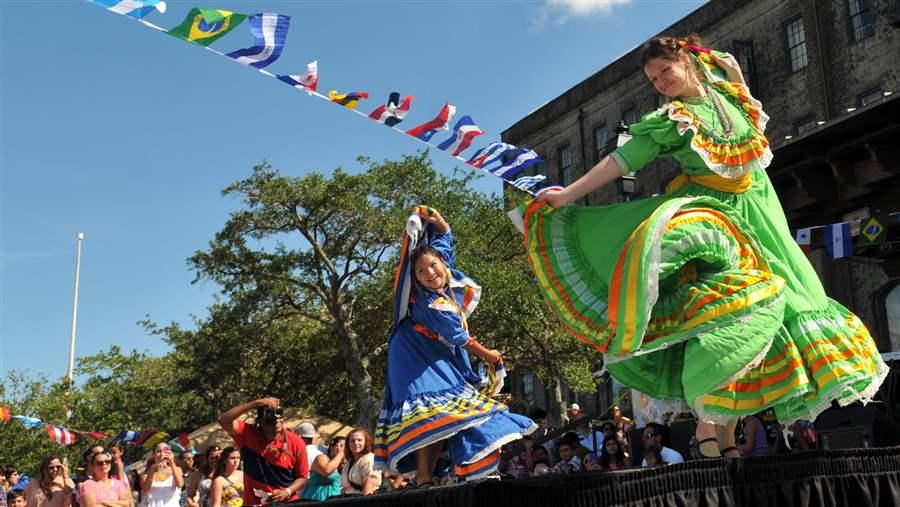 A Mexican dance at Fiesta Latina in Savannah, Georgia, where Hispanic growth helped create one of the country’s newest majority-minority counties last year. America’s population continues to grow more diverse, but the sluggish economy has slowed the transformation.

America continues to grow more diverse, but the trend has slowed as the sluggish economy has depressed minority birth rates and slowed immigration.

Last year, only three U.S. counties became majority minority for the first time, the lowest number in years, according to a Stateline analysis of U.S. Census Bureau data. A decade ago, a dozen or more counties became majority minority every year, but the number declined to seven in 2011 and five in 2012. Counting last year’s additions, the total number of majority-minority counties now stands at 355, out of 3,143 counties (or county equivalents, such as parishes and boroughs) in the U.S.

The main reasons: Fewer babies and fewer immigrants. After the onset of the Great Recession in 2007, the overall U.S. birth rate dropped sharply, but the decline was especially steep for immigrant and Hispanic women, according to a Pew Research Center analysis of Census Bureau data. (Pew Research Center is a subsidiary of the Pew Charitable Trusts, which also funds Stateline.)

At the same time, immigration has declined 36 percent over the last decade, according to a Stateline analysis. It has dropped even more sharply in some of the states that have passed laws designed to keep out unauthorized immigrants: The decrease was 69 percent in Arizona, 58 percent in Utah and 43 percent in Georgia.

But if hard times have slowed the diversity trend, they haven’t stopped it. In about 94 percent of U.S. counties, the minority share of the total population grew between 2010 and 2014, compared to 89 percent of counties a decade before. In 2012, the Census Bureau predicted that non-Hispanic whites would be a minority of the U.S. population by 2043.

In states as a whole, since 2010 minority populations have grown the most (as a share of the overall population) in Nevada (now 48 percent minority), New Jersey (42 percent) and Connecticut (30 percent). In each of those states, the minority population grew by about two percentage points  If the trend continues in Nevada, it soon will become the fifth majority-minority state, joining Hawaii, California, New Mexico and Texas.

South Carolina had the smallest gain in minority population. Its population is now 36.1 percent minority, up from 35.8 percent in 2010. Over the same period, non-Hispanic whites have increased as a share of the population in one in five South Carolina counties, driven largely by the state’s growing popularity as a retirement destination.

The only county to lose its majority-minority status in the past decade was Wayne County, Michigan, home of recession-ravaged Detroit, where the black population has declined since 2010, dropping the minority population to just below 50 percent.

So far this decade, 17 counties have become majority minority, mostly in the West and South, the largest being Mecklenburg, North Carolina, home of Charlotte, where both black and Asian growth has been strong. Seven were in Texas, including Bell County, home of Killeen, and Terrell County on the Mexican border, where the desert landscape was the backdrop for the film “No Country for Old Men.”

Two of the counties that became majority minority for the first time last year—and by far the largest—were in Georgia.  Henry County is an Atlanta suburb with a growing African-American community, and coastal Chatham County encompasses Savannah, where Hispanic growth is driving the change.

In Henry County, many of the new black residents are coming back to Georgia after living elsewhere. County commissioner Bruce B. Holmes, who had family roots in Georgia, was living in Minnesota when he visited Atlanta for a convention more than 10 years ago.

“It was 50 (degrees) below zero in Minneapolis with the wind chill, and here it was 80 degrees in December,” Holmes said. “I made my decision to move back down South that day. The neighborhood I moved into was a brand new neighborhood where I found most of my neighbors had come from places out west like Los Angeles, or New York or D.C. and all of them happen to be minorities.”

Immigrants and young African Americans returning to the South may revitalize rural Georgia areas where growth has stalled, said Mathew Hauer, a demographer at the University of Georgia’s Carl Vinson Institute on Government. Those areas are currently populated by older whites whose children have moved away.

“Everybody in government, even the mayors of these little towns, are all talking about outreach to these international and minority communities,” said Hauer. “They’ve really embraced it.”

Some predict a sea change in Georgia politics as the minority population reaches 45 percent. Georgia went Republican in the last two presidential elections but there was a large minority turnout for President Barack Obama, according to the left-leaning Center for American Progress, which says the state is “at a demographic tipping point.”

However, Hispanic advocates say that a 2011 immigration law has made Georgia less hospitable for Latin American immigrants, who may now be leaving.

Signed by Republican Gov. Nathan Deal, the law is similar to an earlier Arizona law that allows police to challenge anyone’s immigration status. It also requires employers to prove they’re not hiring unauthorized immigrants. Similar laws were also passed in Alabama, Indiana, South Carolina and Utah, according to the American Civil Liberties Union, which has lawsuits against all of them.

“We’ve really seen a decrease over the last two or three years in all our (Hispanic outreach) programs, not only for economic reasons but because of immigration tensions,” said Audrey Rodriguez, who runs outreach programs for the YMCA in Savannah. “We’ve had a mix of Mexican, Central American and South Americans but I think they’re moving to friendlier areas,” she said.

Along with the black and Hispanic growth in Georgia’s Henry and Chatham counties, Asian communities are growing fast in the Atlanta suburbs, including in Henry County. Gwinnett County, which became majority minority about a decade ago, was chosen by the Korean chain Mega Mart for its first U.S. outlet, Hauer said, competing with other Korean markets there like Hmart.

In a Northwestern University study published this year, non-Hispanic whites were asked about their racial attitudes before and after reading census press releases about the shift to a majority-minority U.S. population. The readings “led politically unaffiliated white Americans to lean toward the Republican Party and express greater political conservatism,” the study said, and “led white Americans (regardless of political affiliation) to endorse conservative policy positions more strongly.”

If attitudes change as the minority population increases, more political polarization could be the result. “This work suggests that the increasing diversity of the nation may engender a widening partisan divide,” the study said.

Maureen Craig, who conducted the study, said she doesn’t know if the slowdown in America becoming more diverse would lead to a different result.

“We were mainly interested in how information about the racial shift may be perceived by members of the current majority group, rather than looking at how quickly the shift is occurring,” Craig said. She noted that even though the material presented showed that Hispanic growth was driving most of the minority growth nationally, it brought out negative attitudes about African Americans as well.

“Even though black Americans are not expected to increase very much in terms of their proportion of the population, information about the majority-minority shift led to more negative attitudes towards black Americans,” Craig said.