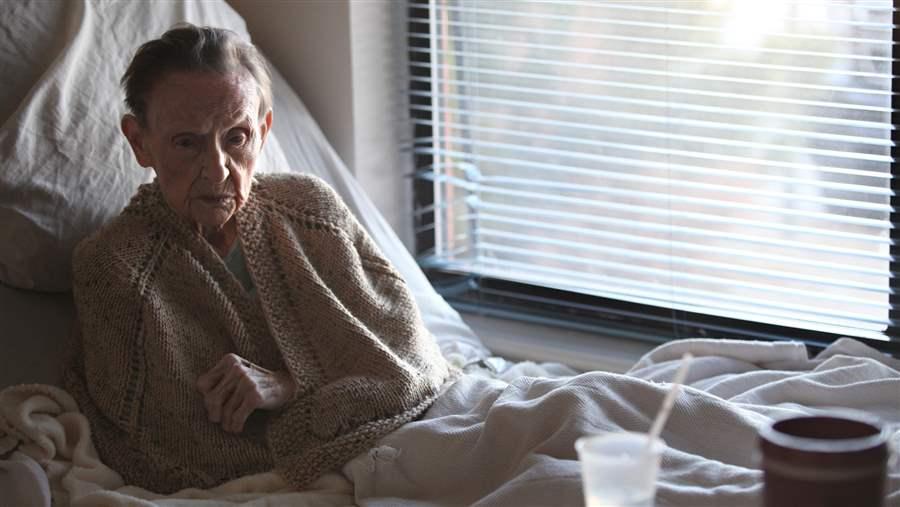 A woman lies in a bed at a nursing home in Fort Stockton, Texas. Frustrated by federal inaction, many states are trying to improve long-term care through their Medicaid programs, including making Medicaid dollars available for care at home. (AP)

Three years after the demise of the long-term care piece of the Affordable Care Act, some states are retooling their Medicaid programs to maximize the number of people who can get care at home and minimize the number who have to become poor to receive help.

They also are trying to save state dollars. Medicaid is a joint state-federal program, and long-term care for the elderly is putting an ever greater burden on state budgets: Total Medicaid spending for long-term services rose from $113 billion in 2007 to nearly $140 billion in 2012.

Two recent reports have focused attention on the issue. The first, an AARP report on long-term care policies released last month, found widespread disparities between states on affordability, quality, the availability of home care and support for family caregivers.

The key to a state’s overall performance, AARP found, was its Medicaid program. According to the report, 24 states have increased the percentage of their Medicaid dollars dedicated to home and community-based services – which 90 percent of seniors say they prefer to institutional care. But there was a huge gap between the top five ranked states and the bottom five. While the top five states (Alaska, Colorado, Minnesota, Oregon and Washington) spent 62.5 percent of their Medicaid long-term care money to home or community-based care, the figure for the bottom five states (Alabama, Indiana, Kentucky, Mississippi and West Virginia) was 16.7 percent.

In order to become “poor” enough to qualify for long-term care under Medicaid, many seniors have to first expend their own resources on private institutional care.  A second report, released by the Government Accountability Office last month, shined a spotlight on the so-called “spend down” issue.

In a non-representative sample of seniors who had been accepted for Medicaid long-term benefits in two counties in each of three states—New York, Florida and South Carolina—the report found that 41 percent had total assets worth $2,500 or less, and another 44 percent had resources between $2,500 and $100,000. Only 14 percent had assets worth more than $100,000.

The report found that the median total resources for all approved applicants was $7,660, considerably less than the $170,516 that was the median net worth of all elderly households in the United States in 2011.

For many seniors, it doesn’t take long to run out of money, said Eric Carlson, a senior attorney at the National Senior Citizen’s Law Center. “With private nursing homes costing $4,000 to $12,000 a month, people’s life savings can disappear very quickly,” he said.

Designed as a Safety Net

When Medicaid was created in 1965 to provide health care for the poor, the long-term care benefit for the elderly was seen as a safety net for a limited number of seniors without the resources to care for themselves. That limited number has grown exponentially as lifespans have lengthened and the cost of private nursing and assisted living care has increased.

Today Medicaid is the largest single payer for long-term care, and 2.5 million seniors rely on that money. According to the Center on Budget and Policy Priorities, a research group focused on low-income Americans, Medicaid covers more than 60 percent of all nursing home residents, and pays 40 percent of the nation’s total costs for long-term care services. AARP estimates that nearly one-third of all seniors will exhaust their resources during their lifetimes and will have to eventually turn to Medicaid for long-term care.

“The system we have was never designed to provide for long term care for such a large portion of our aging population,” said Howard Krooks, former president of the National Academy of Elder Law Attorneys (NAELA), who practices in New York and Florida.

When it was enacted in 2010, the Affordable Care Act included a provision that would have enabled people to voluntarily buy affordable long-term care insurance through payroll reduction, but the measure was repealed after the Obama administration determined it was not financially viable. Instead, Congress created a national long-term care commission, which failed to agree on any solutions.

In 2006, the federal government made it more difficult for seniors to transfer assets (for less than fair market value) to family members or others in order to qualify for Medicaid eligibility, barring such transfers in the five years before the senior applies for Medicaid.

But states vary greatly in how strict they are in enforcing the rule. A GAO report released in May found that 31 states did not require 60 months of documentation from applicants, and that Arkansas, Minnesota and Washington D.C. only required one month of documentation.

Some Republicans on Capitol Hill have criticized those states as lax. But others believe the focus on enforcement is misguided.

“If somebody asked me to account for every penny for the last five years I’d have a hard time doing that—much less if I was an 87-year old who had dementia,” said Enid Kassner of AARP’s Public Policy Institute.

A Way to Retain Assets

Some states also have devised a way for seniors to retain their assets--if they are willing to purchase commercial long-term care insurance policies.

Patrick Breen of the New York State Partnership for Long-Term Care said the advantage for the state is that seniors are encouraged to pay for their own long-term care needs for at least three years. (For a 65-year old in New York, the average price for a three-year policy is about $6,200 a year.) The advantage for the senior is that he or she gets to retain substantial assets without losing Medicaid eligibility.

According to Breen, the average nursing home stay is two and a half years, meaning that most participants don’t live long enough to apply for Medicaid. “It’s probably one of the only programs in New York State that saves Medicaid money,” he said. Since the program began in 1993 in New York, Breen said, 102,000 policies have been sold.

“It’s a terrible system,” said Judy Feder, a health policy expert at Georgetown University who served on the federal long-term care panel. Feder argues that while state Medicaid programs have found ways to save money and improve services, the overall problem of ensuring quality care for an aging population is beyond the capacity of states to solve alone.

“The money is going to have to come from some kind of national initiative,” she said. “If there’s no action, we’re going to see deterioration. I don’t see more coming from the states. To get adequate resources, there has to be a federal role.”