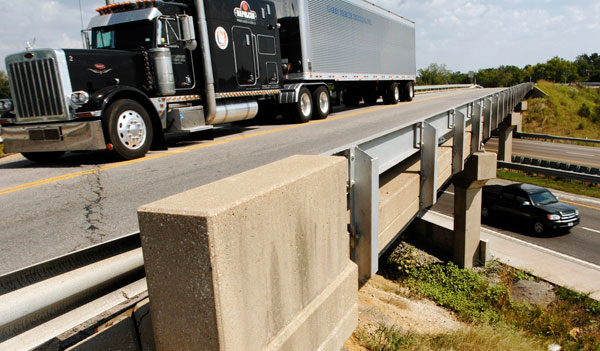 A truck drives on the Highway 40 bridge over I-70 near Midway, Missouri. As the federal Highway Trust Fund barrels toward insolvency, Missouri and other states have delayed highway projects to avoid getting stuck with bills they can’t pay or starting projects they can’t finish. (AP)

Instead of shifting into high gear during what is normally the peak of construction season, state transportation departments around the country are easing off the gas pedal as the federal Highway Trust Fund barrels toward insolvency sometime next month.

The U.S. Department of Transportation estimates that the highway account of the Highway Trust Fund, which allocated $37 billion to the states for highway projects in the fiscal year that ends September 30, will run out of money in August unless Congress can come up with a solution before then. (The mass transit account of the fund is in slightly better shape, but not by much.)

In the absence of intervention by Congress, federal officials plan to implement cash management procedures beginning August 1 that would mean reduced payments to states along with delays in reimbursements.

For the states, which rely heavily on the federal funds to maintain, improve and build roads, bridges and rail projects and bicycle and pedestrian facilities, the situation could spell serious trouble in an area that directly impacts both public safety and economic development. Given the uncertainty over the federal funding, a number of states have delayed projects to avoid getting stuck with bills they can’t pay or starting projects they can’t finish.

States received anywhere from 14.9 percent (New York) to 58.9 percent (Montana) of their total highway and transit funding from the federal government in fiscal year 2011, according to an analysis by the Pew Charitable Trusts (Pew funds Stateline). Nearly half the states (24) received a third or more of their highway and transit funding from federal sources.

Nearly all of that federal money comes from the Highway Trust Fund. Created in 1956 to finance the new interstate highway system, the fund relies on a federal gasoline tax of 18.4 cents per gallon and a diesel tax of 24.4 cents per gallon. The taxes have not been raised since 1993, and inflation has eroded their value. Increased fuel efficiency, decreased driving and the recession have also helped to deplete the trust fund. Since 2008, Congress has funneled $55 billion from the general fund into the Highway Trust Fund to make up the difference between spending and revenues.

Tony Dorsey, a spokesman for the American Association of State Highway and Transportation Officials, said that if the Highway Trust Fund runs out of money, some states will not be able to move forward with projects they had planned to build this year while others may not be able to pay contractors for work that has already been done.

One of the states that will be hardest hit is Arkansas, which received 45 percent of its highway and transit funding from the federal government in fiscal year 2011.

“We’ve probably got up to $120 million in projects in Arkansas that we could have gone to bid with that we can’t go to bid with now because there’s no guarantee that we’ll be reimbursed,” said Rep. Jonathan Barnett, a Republican from Siloam Springs. Barnett, who chairs the House transportation committee, previously served as chairman of the state highway commission.

Arkansas has the 12th largest highway system in the country but ranks 44th in federal and state revenues to support the system. In 2012, voters there approved a half-cent general sales tax increase for a major highway improvement program, expected to raise $1.8 billion over 10 years. In 2011, voters cleared the way for the state to borrow $1.2 billion for an interstate rehabilitation program.

Arkansas has identified $750 million in already-approved projects that rely on federal money. Now, before contracts are bid, the state highway and transportation department has to determine whether its cash flow will enable it to pay the contractors.

The state wants to complete work on any project that has already begun, make sure it maintains enough cash on hand to pay off debt service, and ensure that any employees who are paid out of federal funds can keep their jobs, said Randy Ort, spokesman for the Arkansas State Highway and Transportation Department. In April, the state decided to hold back 10 projects with a total cost of about $60 million. More projects are likely to be delayed as the year goes on.

In Rhode Island, which relies on about $200 million a year in federal funds to plan, build and maintain the state’s transportation infrastructure, the transportation department has temporarily halted nearly all new highway construction projects to ensure sufficient funds for projects that are already underway, including the Providence Viaduct, which takes I-95 through the city.

But in the long term, the state will need to find some other source of transportation funding if the federal money falls through.

“It cannot be overstated that [Highway Trust Fund] insolvency would be crippling for Rhode Island,” Michael P. Lewis, director of the Rhode Island Department of Transportation wrote to the U.S. Senate’s Committee on Environment and Public Works in March. Lewis added that the insolvency could put smaller contractors out of business and place stress on the transportation corridor between New York City and Boston.

Missouri, which received 47 percent of its highway and transit dollars from the federal government in fiscal 2011, was among the earliest states to take action in anticipation of the projected Highway Trust Fund shortfall. In January, Missouri’s highways and transportation commission voted not to add any projects this year to the state’s five-year transportation improvement program. In a typical year, the state adds between 300 and 500 projects. The commission is now considering adding 25 projects, most with significant safety components.

“It’s serious because typically transportation projects take a long time to develop, to be designed and constructed,” said Bob Brendel, a spokesman for the Missouri Department of Transportation. “Instead of being able to make strategic decisions, sometimes we’re forced to make reactive decisions and that’s not the best way to build infrastructure that lasts for decades.”

It costs the state $485 million annually simply to maintain the current transportation infrastructure, said Brendel. For fiscal year 2015, the state construction budget for transportation stands at $720 million, down from $1.3 billion in fiscal year 2009. By fiscal year 2017, the state anticipates having only $325 million to work with. Meanwhile, aging infrastructure means maintenance costs continue to grow, even as the public clamors for things like bicycle and pedestrian facilities in urban areas and four-lane divided highways and road shoulders in rural areas.

“Our ability to do new projects is almost eliminated,” Brendel said. “We’re going to be in virtually a maintenance-only mode, and even that is short of what we need to maintain our system.”

Missouri is among the states hoping to shore up its own transportation funding. In August, voters will decide whether to add three-fourths of a cent to the 4.225 percent state sales tax to be dedicated to transportation, which would raise about $530 million annually.

Bill McKenna, a former chairman of the Missouri Highways and Transportation Commission, now serves as co-chairman of Missourians for Safe Transportation and New Jobs, which is advocating for the ballot measure. McKenna said he reminds residents that the state maintains 34,000 roads, and that the state has over 10,000 bridges, about 1,500 of which need repairs.

But around the country, most states are shying away from large transportation projects this year, after a number of significant increases the year before.

A number of proposals – some short-term, some long – have been floated to replenish the Highway Trust Fund, all of which will face political hurdles.

McKenna, from Missouri, said he’s not holding his breath for Congress to come up with a real and lasting solution.

“We’ve kind of given up that anything will happen other than to kick the can down the road longer, so if you want to do anything you’d better do it yourself,” McKenna said.