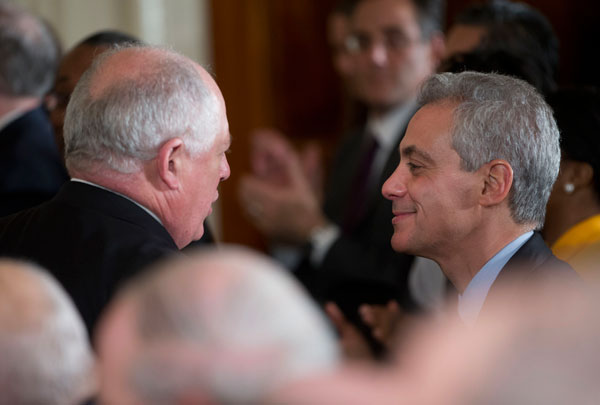 Illinois Gov. Pat Quinn, left, talks with Chicago Mayor Rahm Emanuel in the East Room of the White House in Washington, earlier this year. Quinn signed legislation, backed by Emanuel, to help Chicago out of its public pension fiscal crisis. States are looking at helping cities get out of fiscal trouble. (AP)

When Illinois Gov. Pat Quinn earlier this month signed an overhaul of two pension systems for Chicago city workers, he inserted the state into the city’s budget business and set off a political firestorm that will heat up this fall’s elections.

Quinn, a Democrat running for re-election, wanted to claim the pension overhaul as an accomplishment in a year when legislative victories have been hard to come by—even if it does open him up to the charge that he cleared the way for Chicago to raise property taxes. But Quinn’s decision to intervene also demonstrates the interplay between states’ and cities’ budget fortunes.

Illinois doesn’t want Chicago’s debt obligations—one of the pension funds has only 37 percent of the money it will need in the future, the other just over half—to someday land on the state’s doorstep.  Even more important, Chicago is a vital part the state’s overall economy, and its fiscal struggles affect the rest of Illinois.

“This state has an interest in making the City of Chicago a viable economic place, because it’s the engine of our whole state economy,” said Christopher Mooney, who heads the Institute of Government and Public Affairs at the University of Illinois. “If people think we’re another Detroit, they might avoid it. We’re not Detroit.” 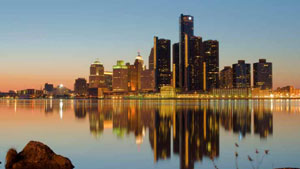 Currently, 19 states have laws allowing them to intervene in a municipality’s financial crisis, according to a report by the Pew Charitable Trusts (Pew funds Stateline).  But an increasing number of states are trying to monitor municipalities’ financial problems so they can step in before the problems become acute.

In Illinois, for example, some are pushing for the creation of a quasi-governmental “Illinois Municipal Protection Authority” that would offer assistance to cities in financial trouble. At a Federal Reserve Bank of Chicago forum in April, Jim Spiotto of the Pension Committee of the Civic Federation, a non-partisan Illinois research organization, suggested the program could be made mandatory if a city failed to hit certain targets of the voluntary program.

Actual municipal bankruptcies are rare: There were only 54 from 1970 to 2009, and only four of them were cities or counties, as opposed to school districts or other local entities.  But the dwindling populations and shrinking tax bases in some cities, particularly ones that have lost their manufacturing bases, could create financial stress—and pressure on states to intervene—in more places.

Michigan lawmakers last month approved $195 million in aid to Detroit as a way to minimize pension cuts to retired workers in that city, the largest ever to go bankrupt. Overall, Detroit’s pension system faces a shortfall of approximately $3.5 billion and the city has a total debt of $18 billion. The city is in court with creditors over its bankruptcy exit plan, which already includes reductions to pensions.

The $816 million package, which was signed by Republican Gov. Rick Snyder earlier this month, also includes a plan to transfer the ownership of Detroit’s city-owned museum to a nonprofit trust, with the proceeds of the transfer going to help the pension funds as well. The legislation also will beef up long-term supervision of the city by the state, well after it emerges from bankruptcy.

States where big cities are in financial trouble feel the fallout the most since these states’ economies are tied more closely to the economy of the large metropolitan areas. Standard & Poor’s Ratings Services earlier this month lowered Michigan’s general obligation credit rating to stable from positive, due in part to the decline in state revenue caused by the Detroit bailout.

“First of all, it’s in state’s interests to have strong healthy cities,” said Alan Mallach, senior fellow at Center for Community Progress, a liberal think tank with offices in Washington, D.C., New Orleans, and Flint, Michigan. “States gave cities lots of [fiscal] room—some used it wisely and some not.  But the states can’t simply say point the finger and say to cities ‘You misbehaved, it’s your problem.’ It is the state’s problem.”

Other states also have taken action recently to clarify what the state’s role should be in helping troubled cities.

In contrast, Pennsylvania lawmakers are taking steps to scale back the state’s role. Since 1987, only seven of the 27 financially distressed local governments that have participated in a Pennsylvania program designed to help them have emerged from it. Ten localities have been in the program for 10 or more years. That was never the point of the program, according to Republican state Sen. John Eichelberger, which would place a five-year limit on cities’ participation. The House has approved the measure and the state Senate is expected to follow suit.