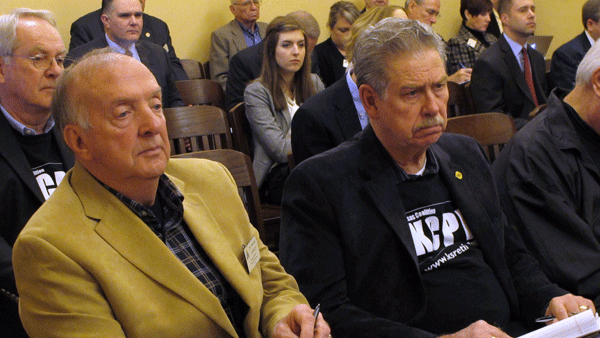 Kansas public retiree advocates watch as a House committee rejects an increase in benefits. The ranks of retired state workers are about to swell.

Aging baby boomers are showing signs they are willing to relinquish their jobs as the Great Recession recedes, bringing on the wave of retirements that state governments feared.

The impending exodus is prompting many human resources departments to dust off “succession plans” for filling positions in a better-educated and lower-paid workforce than the private sector.

And it’s provoking a re-examination of some states’ pay and workforce policies because government must attract the next generation of employees: the millennials.

“Succession planning is the No. 1 issue,” said Leslie Scott, executive director of the National Association of State Personnel Executives. “It’s on everyone’s front-burner.”

“One-third of state workers are eligible to retire in the next five years,” Scott added.

Just how many of the 5 million people employed by state governments will leave is impossible to predict. Economic and eligibility factors, such as age and years on the job, vary from state to state. They don’t always have to wait until age 65. Employees in some jobs can retire or take reduced benefits at 50, for instance. Others can leave at 55 or 60 once they have worked enough years.

Nearly half of state workers are between 45 and 64 years old, a Congressional Research Service report pointed out in March. And signs are they’re increasingly ready to hang it up after clinging to their jobs after the recession struck:

“We’re seeing an uptick in retirements after a period when you were seeing people staying (in their jobs),” said Joshua Franzel, vice president of research for the center, whose mission is to promote excellence in local and state governments so they can attract and retain talented public servants.

A Silver Tsunami of retirement has been predicted for more than a decade. Calendars were clear: Boomers, those born in 1946 through 1964, would start turning 65 in 2011. Knowing they had an older and better-educated workforce than the private sector, most states began making succession plans.

Then the recession hit in 2007, and the global financial crisis the next year. Tax revenue sank, and states laid off workers, froze pay and didn’t fill vacancies. Economic unease, shrunken savings and reduced health benefits for early retirees, in some instances, forced many workers to delay retirement, Franzel said.

What’s changed? The economy has improved. The stock market has been on a five-year bull ride. More jobs are available in the private sector, while states only now are bumping up pay and filling vacancies.

Texas, its state auditor pointed out in January, had the nation’s largest increase in job growth from October 2012 to 2013, and that contributed to higher turnover in the state workforce.

Not having a pay hike for five years can also be an incentive to leave, said William Thielen, executive director of the Kentucky Retirement Systems. That’s especially true if you’re in a defined benefit plan like Kentucky’s and your retirement check is based on the highest five years of pay.

“If your pay is not increased, it doesn’t make a lot of sense to keep working,” Thielen said. “You retire, and many people go out and look for other jobs.”

The challenge facing states is luring younger people to high-skill jobs – especially in information technology, finance, management, health and science – and then retaining them in an environment of minimal pay raises and private sector demand for them.

The good news for state recruiters is that millennials, born from 1982 through 2004, are better educated than their boomer parents. They’ve had trouble finding work despite their degrees. They say in attitudinal surveys that they want to make a difference in society, which public service can provide.

Millennials also want benefits and some job stability, said Mimi Collins, communications director at the National Association of Colleges and Employers, which surveys thousands of students annually in working with industry recruiters and college job-placement offices.

A comprehensive study of compensation in the 50 states out in April by Andrew Biggs, a resident scholar at the American Enterprise Institute, found state governments’ combined health care, retirement and job security benefits outstrip the private sector, even as state workers are asked to contribute more.

But Biggs also found that states paid less universally than private employers. That’s the bad news — and the challenge —- for states. Collins said states will have to go out of their way to compete for workers in information technology, finance, engineering and other highly competitive fields, some of whom can make $70,000 or more coming out of college.

“That is absolutely the challenge,” said Scott of the National Association of State Personnel Executives. “At some point, there’s going to have to be a change in compensation — and not just pay, but benefits.”

In a report on compensation and benefits in February of last year, North Carolina’s human resources director, C. Neal Alexander, warned that the state needed to “pursue creative ways” to attract and retain a new generation of high-performing employees. “This is especially critical as the baby boomer generation begins to age out of the labor market over the next several years,” he said.

Among the strategies Alexander urged: competency- and performance-based reward systems, and more flexibility in balancing direct pay, benefits and an equilibrium between work and life.

In Maine, Kelly Samson-Rickert is taking a creative approach to recruit employees to the state Office of Information Technology, where about 450 employees provide computer services to all state departments and agencies.

Around a quarter of the office is eligible to retire in the next two years, and the pay is up to a quarter less than what’s offered in a competitive marketplace. Pay raises have been on hold since 2008.

Samson-Rickert, director of workforce development, has been working for more than a year with nearby colleges and technical schools to recruit students or graduates who are paid to work 20-40 hours a week for three to six months as interns. They are partnered with employees, who mentor them.

What she gets are young employees or older ones re-entering the workforce who are learning on the job and developing skills to help them get hired full time. She’s also developing supervisory skills in employees who do the mentoring.

“It’s offered a wealth of experience for (the interns),” she said. “We’ve brought about 80 percent of them on board (full-time). And it’s developing our own people internally.”

To appeal to millennials, she stresses public service, a chance to advance or build their resumes and the choice of working remotely or on flexible schedules. In return, they’ve brought new thinking and skills into state government. “The younger generation, they bring in a can-do attitude of ‘Why can’t we do it this way?’” she said. “I really think they raise the bar.”

So far, Samson-Rickert said, she’s had little turnover. But she knows that will change — not only because of retirements, but because of what the state can pay.

“We can’t pay enough in the marketplace,” she said. “That’s where we lose people.”